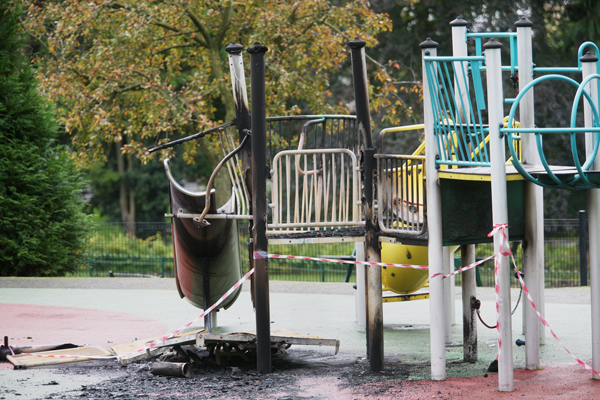 WANTON DESTRUCTION: Tens of thousands of pounds was caused to the children’s play park in the Falls Park at the weekend

SINN FÉIN representatives are preparing to call an emergency Belfast City Council meeting around the ongoing anti-social behaviour in the Falls Park.

It comes after months of wanton destruction at the West Belfast beauty spot, which has seen drunken and drugged teenagers running amok in the park.

A fortnight ago we reported that passengers were injured when their bus and black taxis were attacked by missile throwing youths as the vehicles made their way down the Falls Road past the park.

An emergency multi-agency meeting was convened yesterday (Wednesday) between the PSNI, local councillors and youth providers to try and tackle once and for all the serious issues around the park.

The meeting was called by Sinn Féin councillor Steven Corr after another weekend of destruction which saw tens of thousands of pounds worth of damage caused to the children’s play park area and the outdoor gym area of the park. On Tuesday evening at the People and Communities committee meeting in Belfast City Council Sinn Féin Cllr Ciarán Beattie attempted to bring forward a proposal around the issues affecting the Falls Park, however, this was blocked due to a technicality.

Speaking to the Andersonstown News Cllr Beattie said: “We have asked for an urgent People and Communities meeting [at City Hall] to be called and if we are not happy with the time scale then we will call for a special Council meeting to be held which we have the authority to do. These issues are not isolated to the Falls Park, you also have Lenadoon Park and a number of Council owned facilities where these anti-social issues are prevalent.”

Fellow Sinn Féin Councillor Steven Corr, who is the Chair of the Falls Park/City Cemetery Masterplan Committee, which has seen millions of pounds worth of investment being brought into the park and cemetery, said: “We intend to implement short term and long term plans. Starting immediately we will install temporary lighting and place extra staff in the park. We then plan to get CCTV and permanent lighting installed and long term we intend to carry on with the Masterplan as normal.

“We also want to create posts for mobile park attendants to try and dissuade young ones from coming into the park. They need to understand that they are putting investment at risk.”

He added: “What’s happening in the park is beyond comprehension. I am absolutely gutted and astounded that our young people would continue to do this.

“This madness needs to stop and it needs to stop now. We are sick, sore and tired of this happening every weekend, it’s almost as if it’s the norm now and that’s just not on.”

“It is heart-breaking for kids and families that thugs have destroyed play equipment again in Falls Park.

“The staff and Friends of Falls Park have worked hard to improve and upgrade the park. We will not allow a small number of thugs to destroy these efforts. The whole community must unite to stop these attacks and the PSNI must redouble their efforts to catch the vandals"

Chief Inspector Kellie McMillen said: “We are now investigating two incidents of criminal damage in which outdoor gym equipment and the children’s outdoor play park have been all but destroyed. If anyone has any information about either incident, please contact us on 101 quoting reference number 1373 of 8/10/2017.

“We understand that the cost of damage to the playpark alone has been estimated at over £30,000, money which could have been better spent improving other facilities for the community.

“The damage now means the people who have been benefitting from the outdoor gym and the local children who have been using the playpark have now lost their facilities.

“Since the start of summer this year, we have issued countless appeals, asking parents and guardians to ensure they know where their children are, what they are doing and who they are with.

“From drinking and playing loud music, upsetting local residents, through to throwing stones at police, passing cars and busses, which at times has led to critical bus services for local people being diverted or stopped altogether.

“The damage caused within the park at the weekend is a new low.

“Police will be meeting with local politicians, Council representatives and other partners in the coming days, as we are determined to work together to stop this behaviour which benefits no one.”