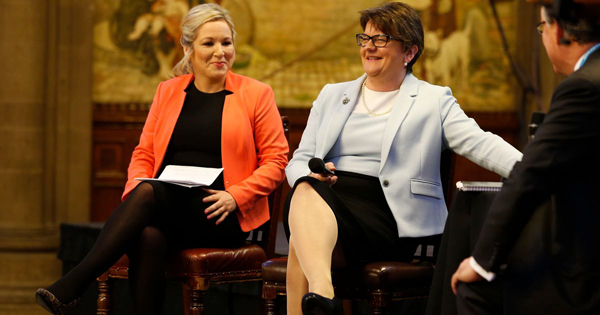 THE two biggest party leaders in the North have clashed over identity and the north’s future role in Europe.

Sinn Fein’s northern leader Michelle O’Neill and DUP leader Arlene Foster were on stage together at the Conservative Party conference in Manchester when the war of words erupted.

“The north isn’t British,” Mrs O’Neill responded when asked if an Irish Language Act would make it less British.

Mrs Foster responded quickly, saying that she did not want to turn the event into a row, but that “Northern Ireland is British”.

Ms O’Neill used the conference to argue the people of the north want solutions to protect them from austerity, cuts and Brexit.

"A special status relationship outside of the EU would do little to deal with the massive political, social and economic challenges thrown up by Brexit,” she said.
"I do not believe that we can withstand exclusion from the single market, customs union, a return of borders of the past or the denial of access to the European courts.
"And on this basis Sinn Féin believes that the only credible approach is for the north to be designated a special status within the EU and for the whole island of Ireland to remain within the EU together."
"Without doubt the DUP support for Brexit and for the Conservative Government poses real challenges. The DUP ignores the anti-Brexit vote back home and has signed up to support Tory legislation on Brexit in direct contradiction to the wishes of the Northern vote."
She added that she is committed to making the institutions at Stormont work, despite the ongoing political deadlock.
"We remain committed to making the institutions to work. I want to lead Sinn Féin back into the Executive. That is what we are in talks to deliver.
"Both Arlene Foster and I have been engaged in intensified dialogue over the past month to determine whether political progress is possible.
"I believe a political breakthrough is entirely possible, but only we can together grasp the opportunity to guarantee the right of every citizen to their democratic social, economic, civil and political rights. Rights that are realised and enjoyed in the rest of these islands.
"That includes an Irish Language Act that provides the right to use the Irish language for official purposes in interacting with the State. The right to access coroners inquests, equal marriage, a bill of rights and a commitment to tackle sectarianism."
On the political deadlock, Mrs Foster said ‘solid progress’ had been made but ‘differences do remain’.
“While our electoral strength in the House of Commons is now widely recognised, I have always made it clear that our important role in London will not be a distraction from what we need to do in Belfast,” she added.
“It is not a choice for the DUP between influence in London and executive power in Belfast. What is in the best interests of Northern Ireland is operating in tandem and this remains our goal.”