‘Pat Man’ ready to take his chance on the big stage 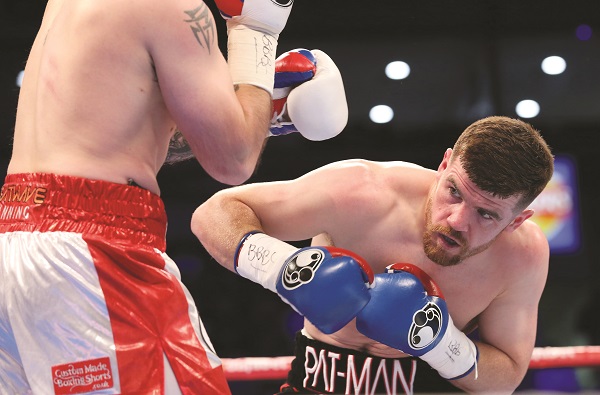 Paddy Gallagher enjoyed an impressive win over Craig Kelly last month to put his November defeat to Tamuka Mucha behind him
HE had to remain tight-lipped for weeks, but Paddy Gallagher is planning to make some noise against Ricardo Silva this Saturday at the SSE Arena on Saturday when the pair battle it out for the IBO Continental welterweight title.

Gallagher was aware for a number of weeks he would be boxing on Saturday’s Carl Frampton v Andres Gutierrez undercard, but was sworn to secrecy until his opponent was approved and last Wednesday, it was confirmed the 28 year-old would be facing the Brazilian who resides in Switzerland.

“It’s good to be at home and fighting on such a big card, as big a card there has been for years,” said the 11-3 West Belfast man.

“It sold out in seconds. I only got 82  tickets a few weeks ago when I hadn’t even been announced and they were all gone within 20 minutes to friends and family.

“Everybody has been talking about getting on this show, but the only person who wasn’t talking about it was me because I knew I was on it but couldn’t say anything.

“It’s an event. I have been on Frampton shows before and it’s mayhem, but in a good way.

“It gets the whole place buzzing, brings the whole city together and shows that boxing is getting bigger here.”

Gallagher wants to be at the forefront of that charge to major honours in the ring.

Ryan Burnett is Belfast’s only world champion as it stands with Carl Frampton hoping a victory on Saturday can propel him back into a world title fight at the end of the year, while Jamie Conlan looks on the cusp of his own title shot and an array of prospects coming through with realistic goals of winning titles.

After losing out to Tamuka Mucha in a British title eliminator last November, things looked a little uncertain for Gallagher. However, an impressive stoppage win over Craig Kelly on the undercard of Burnett’s title success last month helped dust off the cobwebs and here he is again, back with a belt on the line and an opportunity to really ignite his career by climbing the rankings.

He admits he didn’t expect to jump straight into a title fight so soon, but the opportunity was too hard to turn down and having effectively been in camp for 17 weeks, he is ready to deliver once more at a packed out Odyssey.

“I made a plan for when I came back (after losing to Mucha) for what fights I wanted like that last fight against Craig Kelly on the Burnett show,” he explained.

“I wanted two fights like that against decent opponents over six or eight rounds, but then this came up and it was too big an opportunity to pass up.

“It would be a wasted opportunity if I had got a four-rounder down the undercard. I wouldn’t have been seen at all in front of an empty hall, not on TV or a high-profile fight.

“It would have went under the radar a bit so I got this and the reaction has been brilliant.

“Everybody is loving it because there is a title on the line, it’s a hard fight.”

Saturday’s opponent, Silva is something of an unknown quantity.

The 27 year-old southpaw has a very decent record of 14-1 so will arrive in Belfast with confidence he can silence the home crowd and Gallagher acknowledges he faces a tricky night against a man he knows little about.

“I can’t find anything (footage) on him and a few others have been looking,” he admits.

“One fella knows him as he used to box with the Swiss army. He is tough, can take a shot but I don’t think he is a big hitter. He is an awkward southpaw like most of them so I know I will have to be on my ‘A Game’.

“He can take a punch so it will be another one going down the stretch, a 10-rounder.”

Now back in sync with Gerard McManus, Gallagher should return to his all-action, relentless approach which is a sure way of winning the fans over, but first and foremost the MTK-managed fighter must get the win rather that try to entertain.

That defeat to Mucha didn’t prove disastrous, but to get where he wants to go he knows victory is a must on Saturday and he is confident he will do just that before pushing on.

“It (Mucha loss) was maybe a bump in the road, but it hasn’t been a hindrance or messed my career,” he continued.

“I have had one fight and I’m right back up there again so if I get this, it will get me a good ranking and apart from that, it’s a good win against someone 14-1 with five knockouts.

“He’s got a better record than me so if I beat him it’s good in that I can push on and give me a bit more pull having the Celtic and IBO Continental titles. That means I will have proper title fights going forward.

“I would fight the full champion next and then hopefully start getting bigger and bigger fights so long as I can keep winning.”