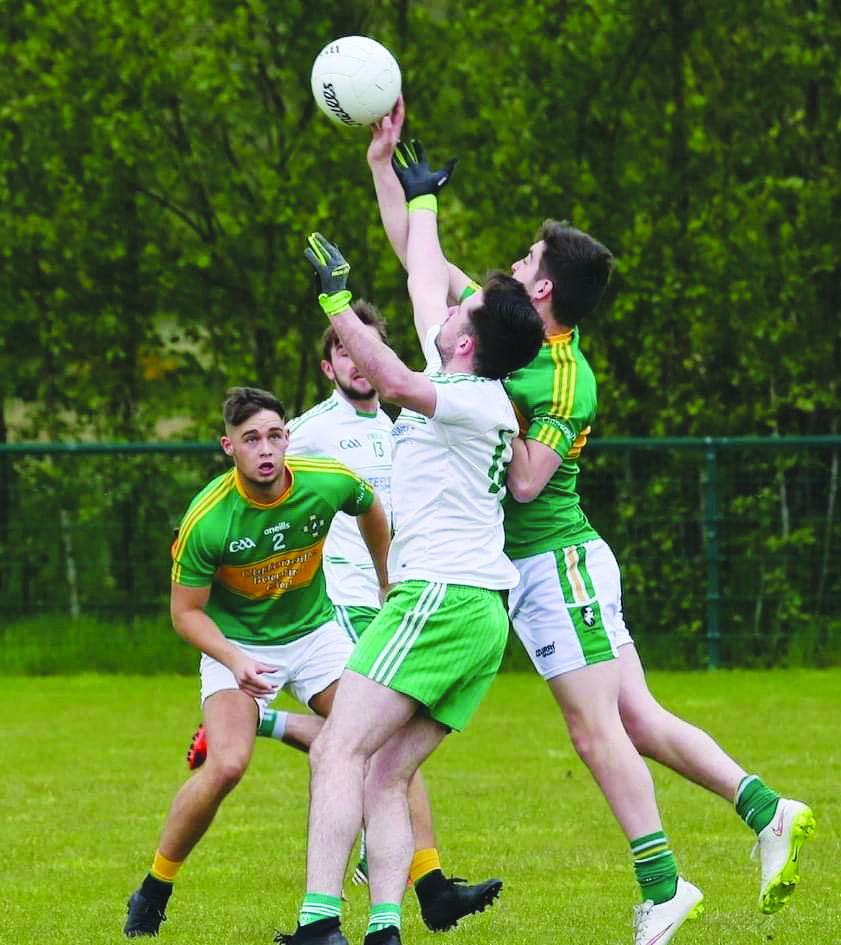 WITH the dispute surrounding the final placings in Group Two of the Antrim Junior Football Championship finally put to bed, the second of the semi-finals will take place this Saturday in Ballymena when Pearse’s face St Comgall’s.

This weekend ought to have been the final, but a challenge from O’Donnell’s to the Ulster Council regarding the final placings in Group Two saw the second of the last four clashes postponed from its original date of two weeks ago.

The West Belfast club felt they ought to have finished second due to St Comgall’s game against Mitchel’s seeing the Antrim town club lend the Poleglass outfit players to make up the 15, therefore rendering it a walkover victory and wiping out their huge scoring difference that would have seen them drop to third.

However, Antrim’s County Board deemed there was no mechanism for O’Donnell’s to return and after some boardroom battles, the action will return to the field with Conor Henry’s men bidding to set-up a final meeting with North Belfast rivals, Ardoyne.

The delay has been out of the control of Pearse’s who have been left frustrated by the wait for their semi-final, but with the fixture finally confirmed at the weekend, Henry said there has been an extra spring in the step of his players this week.

“When we got the fixtures at the weekend, it made a huge difference to our training last night,” he confirmed.

“It can always be difficult when you don’t have that certainty, but the lads have been absolutely brilliant and kept at it the whole way through. Despite all the distractions, they kept themselves focussed and we are all just looking forward to Saturday.”

Retaining focus has been a requirement for all clubs since March given the shutdown of sport, but all somehow managed to keep the show on the road with players doing individual training that left them in good shape upon the return to action.

Pearse’s were no different and Henry reports that his players returned in such firm that it has been a huge competition for starting slots in each game.

“I couldn’t speak highly enough of the lads,” he added.

“It’s been the same for every club during lockdown as it threw all of our plans out the window. They (players) were doing the Zoom quizzes, doing the 5ks and 10ks, posting their results on the group, had online gym classes and all that helped keep us all together.

“When we came back to training, it was absolutely brilliant and it’s actually made it hard for us to pick a team because we have had so many boys busting a gut this year.

“It’s a fantastic place to be in and a great problem to have as everyone has been so brilliant this year.”

It was only natural that there would be a little rust when play did return, but after a few games, players began to get back into the swing of things and after a few iffy performances from Pearse’s in their early group games, they settled to ensure they got the points required to finish top of Group One despite a surprise loss to St Agnes’.

“We didn’t perform brilliantly in the group games at the start and that probably did us more good than anything as it gave us the kick up the backside we needed,” said Henry.

“It gave us a reality check and the lads used all of that to refocus them as we went out in the first two games and turned things around.”

It has been a long wait for championship success at the New Lodge club. They won a Senior Championship in 1968 before dropping down and claiming Junior three years later while in 1974 they took Intermediate honours, but that has been their lot and they will be keen to set the record straight this year.

The prospect of a final between two North Belfast clubs is a huge prize and would deliver another shot in the arm to Gaelic Games in a part of Belfast that seems on the rise once again.

“It would be huge,” agreed the Pearse’s manager.

“You just have to look at what St Enda’s have done over the past number of years for Gaelic Games in the north of the city.

“Ardoyne have also been going well and their U16s have got some good results, so we want to join the party and show what we can do. For years, it was always about West Belfast, but we want to show the north is thriving too.”

To get there’s they must pass what Henry admits will be a “big test” against St Comgall’s this weekend.

The Antrim side have been there or thereabouts in the Junior Championship over the past decade so will represent a step-up for this Pearse’s side.

However, games between the pair have been traditionally tight and it is hard to envisage any different this Saturday.

Henry is a veteran of some of those battles so knows what to expect but has high hopes his team will prevail.

“St Comgall’s and ourselves have had some really tight, competitive games over the years,” he recalls.

“We have always been neck-and-neck with each other.

“My last Championship game for Pearse’s was. close defeat to St Comgall’s and that wasn’t yesterday, so we’ve always been about the same level. They are a good, strong, physical team and have some cracking forwards, so we know it’s going to be a hell of a test for us.”