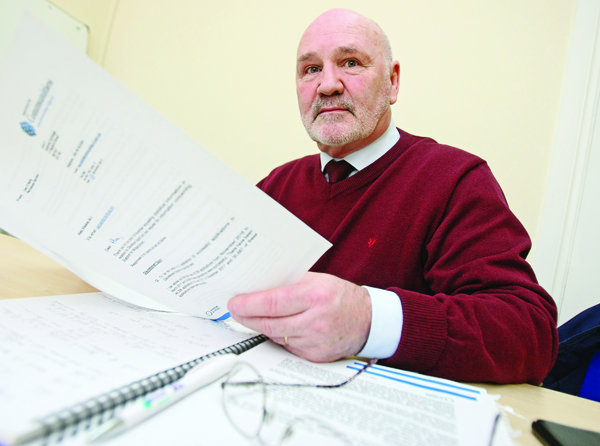 PEOPLE awaiting PIP assessments should seek as much advice and present as clear a medical report as possible ahead of interview, says Sinn Féin MLA Alex Maskey.

PIP (Personal Independence Payment) is replacing the old DLA (Disability Living Allowance) with hundreds of people in West Belfast being re-assessed to see if they qualify for the new benefit.

As of November more than 12,000 people in the north had challenged the Department for Communities (DfC) over the outcome of their initial PIP assessment.

The West Belfast Partnership Board recently held a seminar in its offices exploring how PIP will impact adults with learning disabilities and their families and carers such is the concern and uncertainly in the community.

A West Belfast man who is currently waiting on a date for his PIP assessment interview, and who did not want to be named, contacted the Andersonstown News to say he and many others in the same situation are feeling utterly “helpless” as to what PIP assessors actually want, what they are looking for and are “worried sick” about the potential loss of their benefits.

“Basically when you receive your letter explaining the transfer from your existing DLA payments to PIP you are filled with fear. Immediately you think am I going to lose my payment? Am I going to lose my mobility vehicle? In my case I have a vehicle, which is for my independence and to get about day-to-day. My disability badge allows me to park closer to places I need to get to; it gives me a bit of freedom. When you receive your letter it’s as if you are being told that you aren’t sick enough to be in receipt of a benefit that you are rightfully entitled too,” he said.

“You then get a form to fill out that is not anything to do or about your illness but about placing you in situations and asking you how you cope – again when you are filling this out you are asking yourself is what I am writing going to be enough? How will my answers be rated? Just how qualified are the people who are assessing this letter?”

The 63-year-old told the Andersonstown News that he had received his letter just before Christmas and has been “worried ever since”.

“I have to thank the staff from my local Citizens Advice who have been brilliant in helping me. During my visit to their offices their phones never stopped with people ringing about how to go about appealing the PIP decision. I actually received another letter on Monday saying how the PIP department hadn’t received my completed form – even though it had taken me days to correctly fill in. I spent the next 45 minutes trying to get through to the number given and when I did they told me there was a problem with their phone system – but that ‘it was ok’, they had actually received my form and the next stage in this process would be the interview.
This is all a stressful waiting game for all those going through this.”

Sinn Féin MLA Alex Maskey said he is in constant correspondence and meets monthly with Capita, the company contracted to carry out PIP assessments, and the Department for Communities, to voice concerns being raised in his engagements with constituents.

Mr Maskey told the Andersonstown News that those going through the process should seek as much advice on the matter as possible.

“People by and large do not like the process of assessment. They are very critical of it.

“People need to get support, whether it’s from political parties, independent advice providers, Advice NI, Citizen Advice. They need to do that and present as best a medical report as they can possibly do. The DLA to PIP system is not concerned with what condition you have, it is concerned with how you function with that condition on a day-to-day basis.

“We have always argued that the primacy, the heart of medical evidence be front and centre of any assessment process. I am at a loss as to how you can properly assess anybody without full access to medical reports.”

The Sinn Féin party spokesperson for Welfare and Anti- Poverty said as far as he was concerned “this is a cuts agenda no matter what anyone tells me”.

“The British government were very clear they were spending too much, in their mind, on welfare and wanted to devise means of cutting that bill and that is what they are doing. In my opinion I don’t agree with the Department for Communities or anyone else who would argue that they are trying to simplify the benefits system. I think that is rubbish at the end of the day. Our benefit system wasn’t perfect before but now it is more complicated than it ever was. We have a job of work to do and that is to try and make sure the department delivers the benefits system as sympathically as they can to the people who are entitled to receive those benefits.”

“There are thousands of people going through this process which has been upscaled quite considerably.

“There is little trust shown out there for Capita, for the Department. A way to reduce that is to have interviews recorded. The Department should provide the recording, it is a nonsense for them not to. It’s not as if they need to keep the recordings for years to come and this would ensure complete accuracy of claimants’ interviews,” he said.