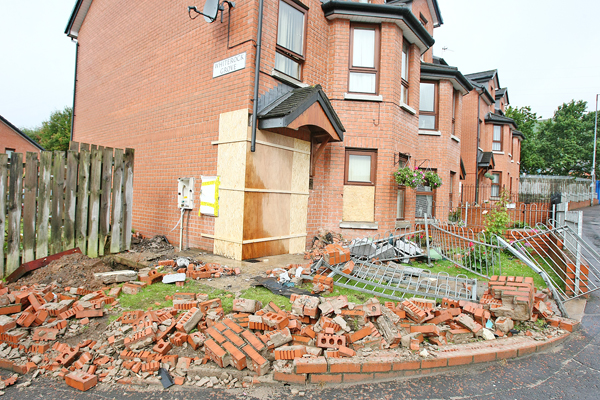 BOARDED UP: The house that was hit by the car, yesterday morning

POLICE have recovered the mobile phones of those responsible for crashing a car into a family home in the Whiterock area of West Belfast on Tuesday night. Residents of the Whiterock Road property narrowly escaped serious injury after a car driven erratically at speeds of over 70mph crashed into the home of Sean and Elaine Russell at around 10.20pm.

The car caused extensive damage to the property and occupant Sean Russell said it’s a “miracle that no one was killed”. Sean lives in the property with his sister Elaine, who has learning disabilities.

Speaking to the Andersonstown News Sean said: “Elaine is badly traumatised, she is normally picked up by bus every morning and taken to her wee centre where she spends her day but we have had to cancel that for the rest of the week. She is staying with our other sister at the minute but we think she will need to be brought to the hospital as she is so badly shaken. Our mother passed away in March and we have both just looked out for each other since.”

Sean said he was locking up for the night and heading to bed when he heard the screech of the car. “I was just turning the TV off for the night and next thing the front door almost came in on top of me, it ended up halfway up the hall, it all happened in a matter of seconds.

“The car hit the corner of the house and ripped the whole wall and fence down, it then came through the front of the house and was there for about three hours. We have to wait now on the structural engineer coming out to see what the extent of the damage is, the house is only ten years old and it’s in bits now. “If the car had hit the gas box at the side of the house it could have taken out this entire row of houses, it could have ended a lot worse.”

Sean said the response and support from Clanmil Housing has been wonderful. “Michaela from Clanmil was here within ten or fifteen minutes and stayed until 5am, then was back out again just after 9am this morning (Wednesday) and Stevie Corr was also here immediately. He got the gas people out straight away and they made sure everything ran like clockwork, so I would really like to thank them.”

Sinn Féin Councillor Stevie Corr, who was at the scene throughout the night and again first thing the following morning, said: “Elaine stands at her front door all the time talking away to everyone and anyone so it is a miracle that she wasn’t killed. The car was embedded in the house for hours and there was a real strong smell of gas. “The opinion of this community is that this is death driving. Two of them bolted and one was arrested at the scene.”

Also on the scene supporting the family was SDLP councillor Tim Attwood. “This is a horrendous incident, thankfully no-one was injured, it’s outrageous. This family are deeply shaken. Who knows what could have happened.

A spokesperson for Clamil Housing said: “One of our homes at Whiterock Road was significantly damaged last night as a result of a car accident. “Following the incident, a member of our team was on site throughout the night, and again this morning, supporting our tenants and liaising with the PSNI and the Northern Ireland Fire and Rescue Service. “The property has been secured by our contractor while we assess the damage and make arrangements for repair. “We are providing alternative housing for our tenants until they can return to their home and we will be helping them to move.”

A spokesperson for the PSNI said: “Local residents of Whiterock Road narrowly escaped serious injury or perhaps worse last night (Tuesday) when a vehicle crashed through their front garden wall and smashed into the front of their home, causing extensive damage to their property which required the services of PSNI, NIFRS, Phoenix Gas, Clanmil Housing and vehicle recovery to name a few. “One male was arrested at the scene and police believe two males made off in the direction of Whiterock Grove.

Woodbourne LPT officers are appealing for witnesses to assist in apprehending these males, one of whom was said to be wearing a hi-vis vest. Please ring 101 with any information, quoting serial number 1579 of 25/07/17 to help catch these cowards and bring them before the courts. “We would also appeal for these suspects to make contact with us ASAP... you left your mobile phones behind lads!!!”