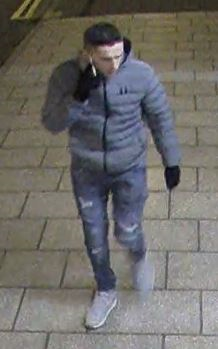 POLICE have released a CCTV image of a man they want to speak to after thousands of pounds worth of damage was caused to Glider halts in West Belfast in January.

Officers are
investigating incidents of criminal damage to Glider halts outside two schools
– the stop at Beechview Park outside Coláiste Feirste and the Stewartstown Road
outside  St Genevieve’s. The attacks took
place at 1am and 1.30am on New Year’s Day.

Constable McMullan
said: “Thousands of pounds worth of damage was caused to ticketing machines at
Glider halts in West Belfast.

“These acts of
vandalism not only inconveniences the transport provider, they also
inconvenience local communities who suffer as a result.

“We have been
conducting an investigation into these incidents and are now releasing a CCTV
image of a man we believe can help us with our enquiries.

“I would ask this
individual, or anyone who believes they know who this is, to contact police at
Woodbourne station on 101, quoting reference number 1162 of 01/01/19.”

Information can
also be provided to the independent charity Crimestoppers on 0800 555 111, which
is 100% anonymous and gives people the power to speak up and stop crime.