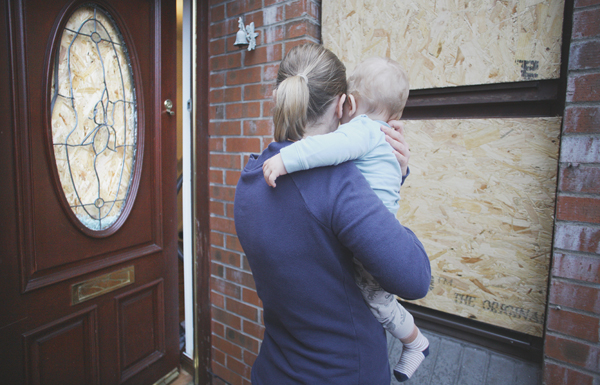 A POLISH mother-of-two who has lived in Belfast for ten years has been left shaken after her North Belfast home was targeted in a racist attack.

The Downview resident was putting her eight-year-old and nine-month -old sons to bed when she heard glass smashing.

The front door glass and windows at the front of the property as well as the family car were damaged in the attack which happened at around 11pm on Sunday night.

“I was upstairs putting the children to bed when I heard the smash of the glass,” she said.  “I have glasses in a cupboard in the kitchen and my first instinct was that they had fallen and smashed.

“I came downstairs and the glass in the front door was smashed. I looked outside and saw four men dressed in balaclavas who were running up the street. There was a car at the top of the street waiting for them.”

She had previously lived in the New Lodge before buying her Downview house in February. She says she has never experienced any form of racism before in Belfast. She said the family had been left distressed in the run-up to Christmas.

“I have lived in Belfast for ten years and have never experienced anything like this before.

“I’ve heard stories about racist attacks before. I never thought it would happen to me.

“I’m a strong person but this has left me shocked. It’s especially distressing with damage to my house and my car destroyed with Christmas just around the corner,” she added.

“My heart goes out to this family after such a violent, cowardly and despicable attack on their home.

“This racist attack must be condemned in the strongest possible terms by the community and political leaders alike.

“It is of huge concern that there has been a series of recent racially motivated attacks including here in North Belfast and today another family have been left completely devastated.

“I spoke to the victims at the first opportunity to offer support and solidarity and they were very distressed indeed.

“I’m working with them currently and have been in touch with statutory agencies on their behalf.

“I’d appeal to anyone with any information about this incident or other recent racist attacks to come forward urgently,” she added.

Police said they are appealing for witnesses and information following the attack.

Inspector James Murphy said: “We are appealing to anyone that may have witnessed any suspicious activity in the area. In particular, we are wanting to speak to the driver and occupants of a red vehicle, believed to be a Mazda, that was in the area at the time.

“Anyone with information should contact Tennent Street Police Station on the non-emergency number 101, quoting reference 1191 on 27/11/16.”