JUDE COLLINS: Bloody Sunday is a nightmare from which we still haven’t woken 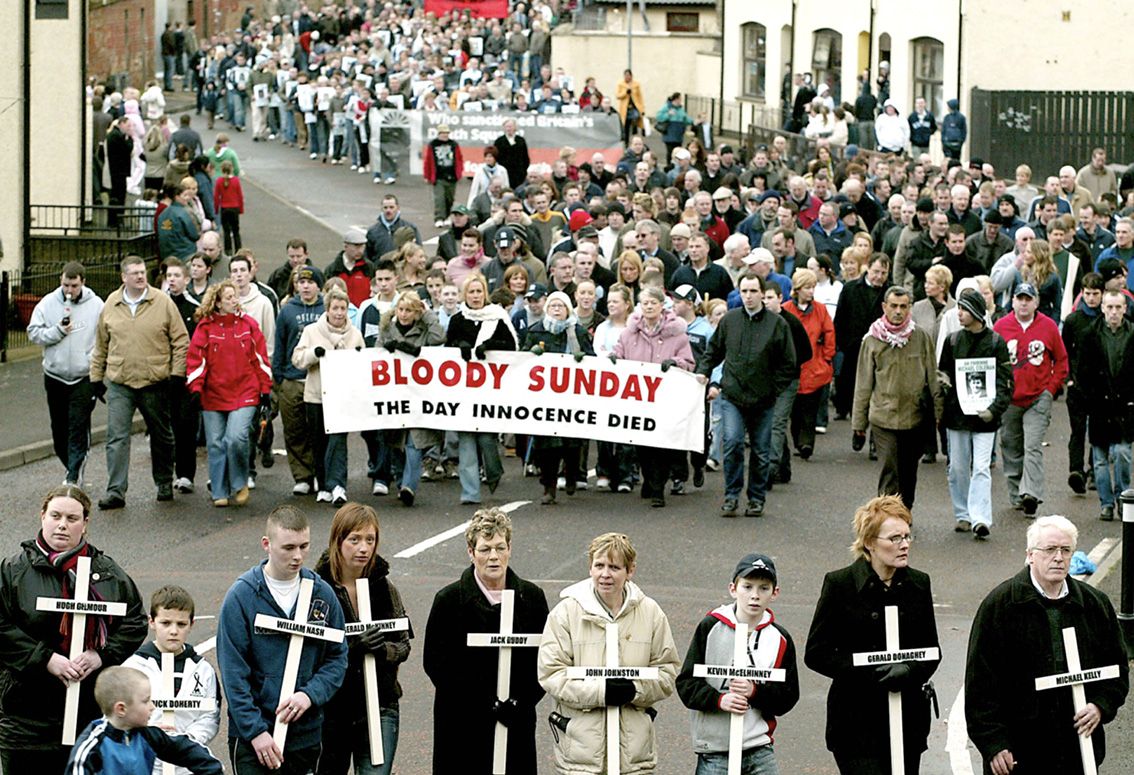 ORDEAL: Relatives marching in search of justice failed to get the support they needed for too long

AMID all the ceremonies, all the speeches, all the suffering relatives clutching poster pictures of their loved ones shot dead on Bloody Sunday fifty years ago, one question demands answer: how did they get away with it?

Because Bloody Sunday wasn’t Bloody Sunday night. It was Bloody Sunday afternoon. The thousands of people present were witnesses to the event. Fourteen innocent people were mortally wounded that day. We know who did it – the Parachute Regiment. So how did they get away with it?

The answer is, the British establishment. The bodies of the dead were scarcely cold before the lies began. The commanding officer, Wilford, insisted that his men had been fired on first.  Remember that barked command not to shoot unless fired upon, which is heard every time that infamous film clip is played? Did the barking officer know what was coming? Had he made the decision that it should happen, and wanted to get his justification in first?

Having murdered, the British authorities at home and abroad launched an all-out assault on the truth. The Widgery Report, usually referred to as the Widgery Whitewash, tried to present the dead as the source of initial violence.  So it wasn’t just the British Army – the British judicial system weighed in to back up their lies.

And now, fifty years later, must victims find comfort from  marches and speeches? To coin a phrase: has any stone been left unturned in the investigation of who was responsible for Bloody Sunday?

Some say we shouldn’t focus on the trigger-pullers. Yes, we should. It was because of their bullets that fourteen innocent lives were taken. Let them say they were only following orders: that doesn’t absolve  you  from your vile crimes. That said, those who sanctioned the slaughter, gave the orders, should also have been identified and charged.

So rather than salute the prominent personalities who attended and spoke at Bloody Sunday commemorations last Sunday, I’d ask: Since you say you care deeply, why haven’t you acted to expose, from top to bottom, those responsible for this mass murder? Speeches and wreaths and heart-wrenching words are fine, but if after fifty years Taoisigh and Presidents haven’t done something about the festering injustice of that day, then last Sunday they might as well have stayed at home, made a cup of tea and done the crossword.

Sometimes I think Bloody Sunday is a nightmare from which we still haven’t woken. How otherwise to explain a world power killing what it saw as its own citizens in the clear light of day, then taking forty years before it can cough up the word “Sorry” and expecting us to applaud them?

There is a lesson here: British justice is a bloody contradiction in terms. Shame on them and shame on us, that we have let fifty years pass  and allowed our politicians to settle for posturing and speechifying.