Praying to the lamppost Lord 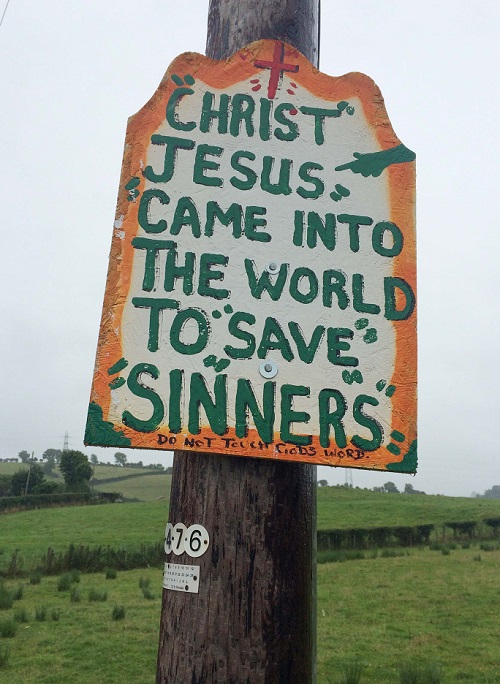 ‘Do not touch God’s word’ reads the bottom of this very odd sign nailed to a telegraph pole halfway between Saintfield and Ballynahinch.

Squinter was on a 14-mile rambling loop between the two towns on Sunday and very pleasant it was too until around 4pm when the skies opened. Before long man and dog were as soaked as if they’d just climbed fully-clothed out of a swimming pool and it was a bedraggled pair which came across the sign under brooding and ominous grey skies and a downpour of, ah, Biblical proportions.

In the circumstances, Squinter felt very much like Gregory Peck must have felt in The Omen. As he drew closer through the driving rain, it appeared first to Squinter as though Christ Jesus had come into the world to save Shinners, but hopes of a politico-religious rapprochement in rural County Down were cruelly dashed when the truth became clear.

Then Squinter wondered about the liberal use of quotation marks. Why’s “CHRIST” in double quotation marks while JESUS isn’t? Are we supposed to say the word as if we’re ironically crooking our two index fingers at the same time? Why has THE WORLD been left alone and ““SINNERS”” given four? Why’s “SAVE” singled out and “CAME INTO” ignored? God alone knows.

Which brings us to perhaps the most curious aspect of all. Why is the sign painted in green, white and orange?