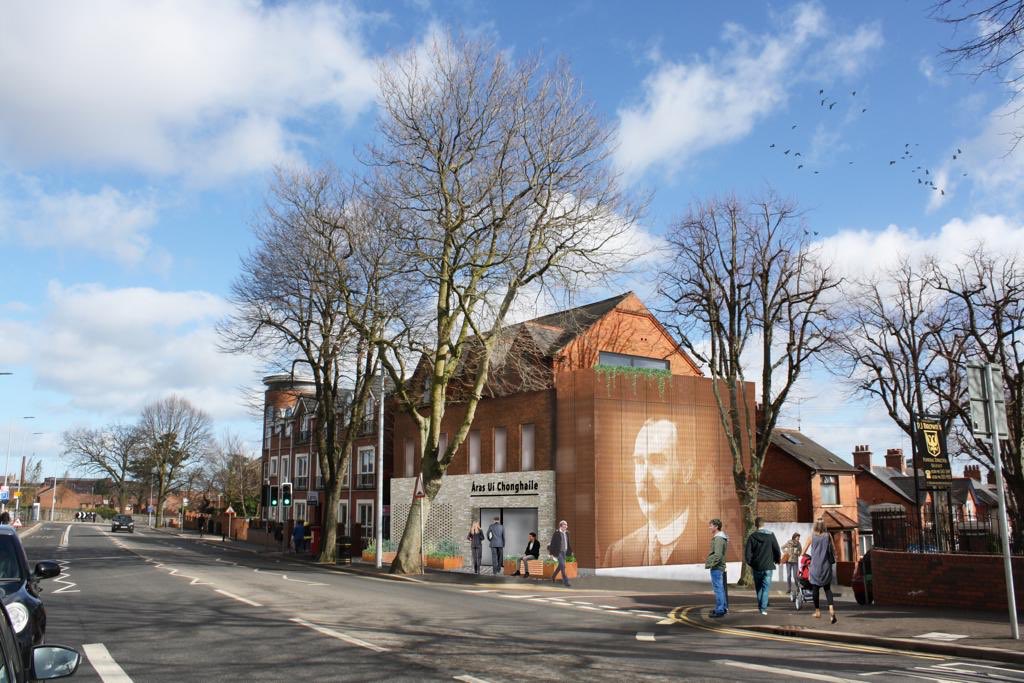 Tourist attraction: Áras Uí Chonghaile will open on the Falls Road next month

AN ORIGINAL 1916 Proclamation along with the printing blocks used to create the document are among the historically invaluable artifacts to go on display for the first time ever together when Áras Uí Chonghaile opens its doors next month.

The Gaeltacht Quarter-based £1.4 million three-storey building is set to welcome tourists and visitors from Saturday, April 20 when the centre opens to offer an interactive exhibition, study area, a fascinating library of Connolly’s writings, café and conference facility.

The opening of Áras Uí Chonghaile comes three years after a statue of James Connolly was unveiled outside the Falls Community Council to commemorate the 100th year of the Easter Rising. The bronze statue was unveiled by a great-grandson of the 1916 hero, James Connolly Heron, who described West Belfast as Connolly’s “spiritual home”.

The ambitious project, led by Fáilte Feirste Thiar, will host a pageant parade on April 19, Good Friday, and will leave from Conway Mill, a site where James Connolly organised mill workers during the time he made West Belfast his home.

“There are five core elements to the centre, starting with the ground floor, world-class visitor exhibition. The first floor of the centre will house the Connolly Library and will consist of the world’s finest collection of writings including books we have secured from when James Connolly spent his time in Kilmainham Gaol. The fourth element of the centre will be an event and conference space, with all the first class facilities you would expect.”

Harry told the Andersonstown News that a year-long events programme has also been planned with folk sessions, film club meetings held once a month in conjunction with Sean Murray’s Respect film company, and a series of seminars and lectures.
“We are also delighted to announce that Hatch Café will take up residence in the centre as our hospitality partners and will be open to the public,” he said.

Áras Uí Chonghaile centre manger Séanna Walsh spoke of how the centre will host a programme of events that will try to emphasise that “It’s not just about Connolly the Irish rebel, it’s as much about Connolly the trade unionist, the guy who organised the mill workers in Conway Street, the guy who went to the States and organised several trade unions there, who all take their lineage right back that far.”

Séanna continued: “There will be a major educational element to the centre, we want schools, colleges, universities coming to see the project.

“It’s ground-breaking the things we will have on display for the first time: an original Proclamation and also a half Proclamation which was actually produced by the British to use in evidence during the court martial.
“Having the seven signatories at the bottom was all they needed, those along with the original printing blocks will be displayed for the first time ever together.

“At the end of the day, the centre has to be Connolly in the round. Not the one-dimensional Connolly – the Irish rebel. It’s important to the legacy of the man this centre is seen as a resource by the trade unions right across the island.”
Harry said that there is no doubt Áras Uí Chonghaile will become a key part of the city’s tourism trail.

“We want to thank our funders Belfast City Council and the wide range of sponsoring trade unions from the States that have pledged and delivered key financial resources which have allowed the centre to become a reality.”