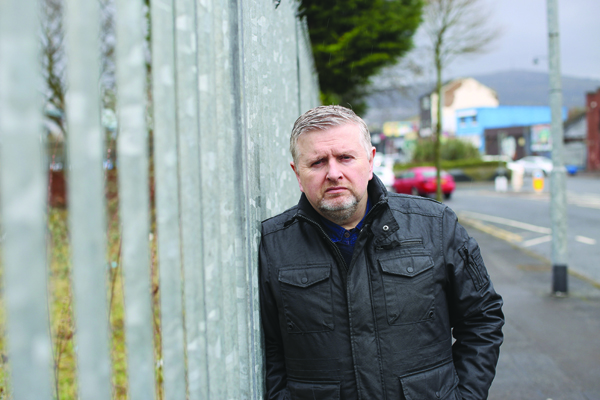 FORMER Holy Cross parish priest Fr Gary Donegan is to feature in a new BBC documentary about his life to be shown tonight (Wednesday).
‘Priest in the Jeans’ tells the journey of the Passionist priest, from growing up in Fermanagh to a 16-year spell as rector of Holy Cross church in Ardoyne. Stephen Nolan talks to the unlikely man of the cloth who as a child had been told by his headmaster that he would never make an altar boy.
Born in Co Fermanagh, Gary Donegan was destined to be a top GAA player, but after witnessing the comfort and help the church provided after tragedy struck his best friend’s family, and subsequently suffered loss himself, he felt a calling and became a postulate at the age of 18.
In 2001, he was appointed to Ardoyne and along with his predecessor and former colleague Fr Aidan Troy walked with and tried to protect from loyalist protestors schoolchildren, going to and from Holy Cross Primary School.
Throughout his ministry, Fr Donegan was deeply involved with the community, and rather than wear staid clerical robes, preferred to dress mainly in jeans and a leather jacket.
He was a nightly presence at Twaddell Avenue during the almost three-year loyalist protest against the Parades Commission ban on a Twelfth parade returning past Ardoyne shops.
He stood among protestors, building relationships on both sides before facing a barrage of verbal abuse from people from his own community when the dispute ended.
Many will remember his ministry and leadership in North Belfast as very much ‘on the street’ and he was a visible presence during many troubled times that befell his parish.
In the programme, Fr Gary also meets with Saoradh member Dee Fennell – with whom he had a very public altercation – for the first time since the Twaddell protest ended. He also talks about the threats and violence from both sides that he has endured throughout his priesthood.
Producer and Director Eamonn Devlin said: “Fr Gary is one of life’s really surprising and engaging characters.
“When we scratched the surface, we discovered a man who has quietly and doggedly contributed to the peace process and greater Ardoyne area in such a meaningful manner that he was hard to ignore.
“Thankfully he agreed to share his inspirational story with us and gave us a revealing insight into some of the darkest periods of his community’s history.”

‘Priest in the Jeans’ will be shown on BBC One Northern Ireland at 10.40pm on Wednesday, March 28.