JUDE COLLINS: PSNI need to get up to speed on the facts 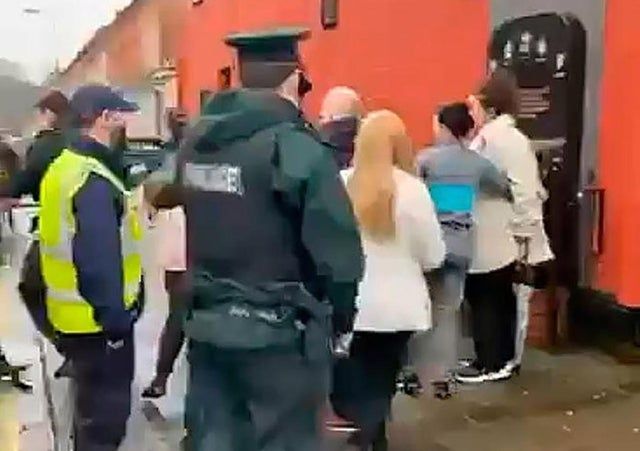 FLASHPOINT: The behaviour of the PSNI at the Ormeau Road commemoration has caused great anger

GILBERT and Sullivan claimed that a policeman’s lot was not a happy one, but Brendan Behan had a different angle: “I have never seen a situation so dismal that a policeman couldn’t make it worse.”

The friends and relatives of those who attended to pray and lay flower wreaths to mark the 29th anniversary of the shooting dead of innocent people in Sean Graham’s bookies on the Ormeau Road would, I am certain, agree with Behan.

If they didn’t understand, it suggests an appalling ignorance of local sensitivities  – what sort of training do PSNI recruits, men and women,  get? Or if they did understand, what the hell were they doing even stopping their vehicle to interfere in a grief-drenched occasion?

From the clips of the altercation and arrest, it’s clear that the local people were deeply upset, not just by memories of that murderous day in 1992, but by the interference of police. On the video you can hear some seriously earthy language being directed towards the police officers as they take away survivor Mark Sykes. Not the kind of language you’d use in front of a Reverend Mother, but since I was directing a few Anglo-Saxon expletives at the TV myself, I’ll not cast the first stone.

What sort of thought processes were working that the police felt they had to stop their vehicle and get out of it, let alone get into scuffles with the people there and arrest Mark Sykes? Have they never read anything of the history of the Troubles and the part played by police? Or do they simply not give a damn?

When the PSNI first emerged to replace the RUC, they were a model of how policing should be carried out: polite, friendly, helpful. A bit like the British troops immediately after their arrival in 1969.  But just as the British army quickly revealed their contempt for local people, the PSNI seem intent on following just the same path.

A couple of days ago I received a short video with a split screen, showing on one side the manhandling of Ormeau Road people, and on the other the hands-off approach used with the throng of marching loyalists in East Belfast. Why did the PSNI  not intervene and arrest these masked men? Because, we’re told, they were massively outnumbered. So maybe that was the deciding factor on the Ormeau Road last week: there’s not that many of them, so here, stop the vehicle and we’ll sort them out.

Initially, Chief Constable Simon Byrne issued a statement: “ We are currently working to establish all the facts. I will provide a further update in due course.” Since then he has apologised to the families involved in the commemoration ceremony and one PSNI officer has been suspended.

In the years of the Troubles, nationalists/ republicans drew a similar comparison and the RUC became totally discredited. Assuming that the PSNI want to avoid a similar fate, perhaps the Chief Constable should get up to speed with ‘all of the facts’ of policing  history in this pain-ridden north-eastern corner of Ireland, then issue firm instructions to his men and women on how they can best serve their paymasters, the public.