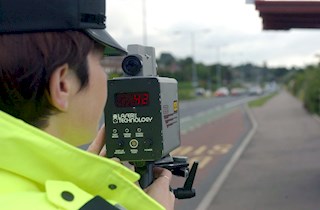 POLICE across the North are participating in a 24-hour speed enforcement marathon today as part of a Europe-wide crackdown on road safety.
The campaign by TISPOL – the European Traffic Police Network – will stamp down on speed, drink and drug driving, not wearing a seatbelt and not using a mobile phone whilst at the wheel.
Inappropriate speed is the single biggest factor in fatal road collisions across Europe, Police across the north are participating in the 24-hour speed enforcement marathon today.
Chief Inspector Diane Pennington explained: “Speed, or more accurately excessive speed, for the conditions is consistently one of the principal causes of the most serious road traffic collisions in which people are killed or seriously injured on roads across Northern Ireland.
“Road policing officers, working alongside Local and Neighbourhood Teams, District Support Teams, Tactical Support Group and the Northern Ireland Safety Camera Partnership, will be paying particular attention to drivers who fail to stay within the speed limits over the next 24 hours.
“Already this year, nine people have been killed on our roads. While the number of people killed has fallen when compared to the same time last year, the sad reality is that behind each fatality, there are families, friends and communities across Northern Ireland who are mourning the loss of a loved one.
“When you consider that many, if not the majority of these deaths caused by collisions could have been avoided; it is an appalling waste of life. This is why every single person, whether as a road user or pedestrian must do something to help prevent deaths on our roads.
“Pedestrians must pay attention to their environment, whether that means not getting distracted by friends or mobile devices, or being especially careful when walking on country roads by walking against the traffic flow and by wearing highly visible clothing.
“With the brighter evenings we are mindful of more motorcyclists taking to the roads, so we’re encouraging bikers to ensure their motorcycles and safety equipment are in good working order and that they ride defensively. In addition, drivers need to be alert to the presence of motorcyclists using the road network, particularly when emerging from and turning into junctions.
“Cyclists also need to remember they are amongst the most vulnerable road users, so we recommend wearing a helmet, always using front and rear lights, not listening to music players and keeping aware of their surroundings.
“At the same time, drivers must be aware of cyclists, paying particular care at junctions, traffic lights, when opening vehicle doors after parking. Most importantly, drivers need to give cyclists enough room when overtaking.
“Police will continue to focus on robustly enforcing the law to make Northern Ireland’s roads safer. All we ask is that drivers slow down, never drive after drinking or taking drugs, wear a seatbelt, drive with greater care and attention and don’t use mobile phones while driving.”