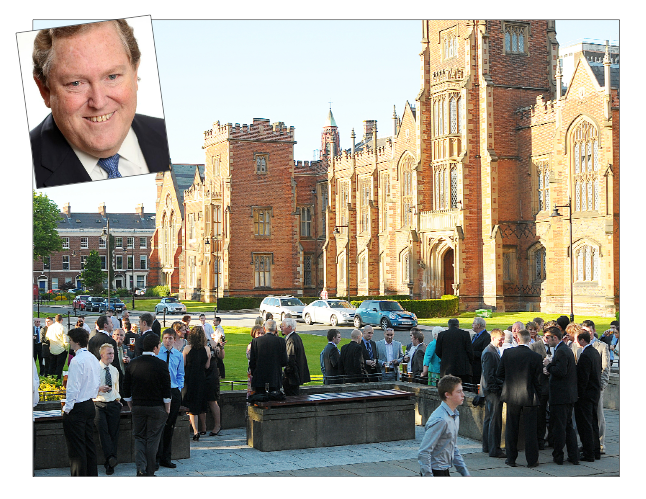 Queen’s University has been described as “innovative, dynamic and exceptional” by its new Chancellor Tom Moran (inset)

One of Irish America’s most familiar, busiest and respected business and philanthropic figures is about to forge yet another substantive link between New York and Belfast.

Tom Moran, President and Chief Executive Officer of the Manhattan-based Mutual of America Life Insurance, has been appointed Chancellor of Queen’s University Belfast.

“Queen's University announces the appointment of leading Irish-American businessman and noted humanitarian, Thomas J Moran, as its new Chancellor,” stated the announcement from the university.

A native New Yorker with ancestral roots in counties Fermanagh and Cavan, Tom is listed as one of the top 100 Irish American businesspeople, has been President and Chief Executive Officer of Mutual of America Life Insurance since October 1994, and is the first person to have been appointed President from within the company.

Tom is also chairman of Concern Worldwide, the New York-based international humanitarian relief organisation that operates in thirty of the poorest countries of the world.

“He has contributed to several humanitarian and community causes, including acting as one of a group of unofficial peace envoys to Northern Ireland throughout the 1990s,” stated the Queen’s release.

Rotha Johnston, Pro-Chancellor and Chair of Senate, the university’s governing body, said: “I am delighted that Queen’s has chosen Tom Moran to be its new Chancellor. Tom is recognised for his steadfast commitment to helping others and for his charitable, philanthropic and educational work. He joins Queen’s at an exciting time in its development and we very much look forward to the important contribution of our new Chancellor.”

Accepting the position, Tom Moran said: “It is a great honour to accept the role of Chancellor of this fine institution. Queen’s is known around the world as an innovative, dynamic and exceptional university that helps change lives for the better.

“I hope, during my time as Chancellor, that I can make a positive contribution to the university’s continued success and to increase further its global impact on society.”

Tom Moran will serve as the university’s Chancellor for a period of five years with effect from May 1. He graduated from Manhattan College with a Bachelor of Science degree in mathematics. In 2006, Queen’s University awarded him an Honorary Doctorate of Science (Economics) for services to business, commerce and to public service.

He and his wife, Joan, currently live in New York City.

The Chancellor of the university fulfils three main roles: a ceremonial one which involves presiding at degree congregations; an ambassadorial role, where the office holder helps to open doors for the university as it seeks to fulfil its mission; and as an advisor, available to the Vice-Chancellor and senior management as a sounding board and providing counsel and guidance.