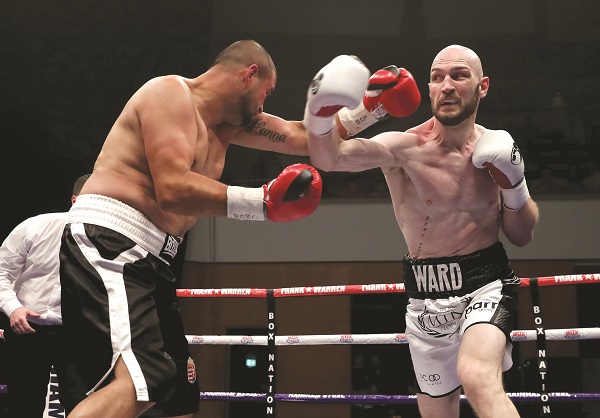 Steven Ward is grateful to get the chance to showcase his skills on such a major stage this weekend
HE is known as ‘The Quiet Man’, but Steven Ward intends to use his opportunity on the undercard at the SSE Arena tomorrow night to get tongues wagging about his potential.

The 27 year-old former Monkstown amateur takes on Croatia’s Josip Perkovic (4-2-1) over six rounds at light-heavyweight in what is his fifth pro fight.

A silver medallist at the 2010 Commonwealth Games, Ward is now based in Manchester, training under Oliver Harrison and while he has spent more time in the north of England than North Belfast in recent months, he says the chance to box on such a massive stage is one he is excited about and thankful of.

“I have been away from my family quite a lot,” he explained.

“I’m training in Manchester so I spend a lot of time there. I think out of the past 11 weeks, I’ve been at home for three of them.

“You can’t complain though. These opportunities don’t come around every weekend and Frampton says himself that this could be his last fight in Belfast. Hopefully it’s not, but to even be a part of this and to experience the atmosphere….

“I can’t wait and I’m just thankful Cyclone Promotions have me on it and my management at MTK were able to get me on it.”

Ward has been kept busy since turning over to the paid ranks and this will be his fifth fight in eight months, his last coming at the Waterfront Hall last month against Istvan Orsos he won by stoppage.

He steps it up this weekend against an opponent in Perkovic who comes to Belfast with a winning record.

Not that is fazes Ward who is excited by the challenge and hopeful he can dazzle the early arrivers in the arena.

“This will be the toughest fight I’ve had yet,” he acknowledges.

“This guy is coming in with a winning record and just off the back of another win so it will be my biggest test yet.

“It’s been a good camp. I didn’t have much time off after my last fight, but you can’t complain about that when you get on a show like this.

“I would expect to be on early enough as Cyclone have their own boxers there and a couple of cracking fights like Paddy (Gallagher) being there, Conrad (Cummings) as well and their female boxer (Chantelle Cameron). I can’t wait. This is my first time boxing in the SSE Arena as well.”

The excitement in Ward’s voice is palpable as he prepares to be a part of such a huge occasion that will see the early fights broadcast on Spike before switching to Channel 5 for the main event.

Like anyone with even a passing interest in boxing, inside the SSE Arena is the only place to be this Saturday with Ward getting one of the prized slots on the undercard and being able to play a part in such a huge event with the attention of the entire city fixing its gaze upon those in action on the night.

“I’m buzzing. It’s the biggest bill I have been on in my career,” he confirmed.

“It has been a busy load of months for me as well for me so to get a call-up to go on the Frampton show…. Every boxer in the North and the South was hoping to get on it, so to get the nod and be one of the first released was great. It was a great buzz.

“That’s why I was looking forward to getting home and making the weight.

“The whole of Belfast just comes to a standstill when Frampton fights and that’s great to see. It’s going to be exciting.”

While taking part this weekend is great, what it offers is a huge opportunity to win new fans by delivering a top-class performance and that is something Ward feels he is ready to do against the Croatian.

Emulating the achievements of ‘The Jackal’ is the dream for every boxer in the city and Ward is no different so he is determined to deliver a performance befitting of the occasion and sound warning of what lies ahead in his career.

“Whenever Frampton fights, everyone in Belfast stops so as soon as I was announced on the bill, I was getting bombarded for tickets,” he continued.

“It’s the hottest ticket in town, so  it’s brilliant for me coming up in my career to experience this. I’m so thankful to Frampton to have me on his undercard and for people to see me and see what I could do down the line.

“His career is a really good thing to look at and it’s something to set a goal to because that’s where I want to be and intend to be in a couple of years’ time.”