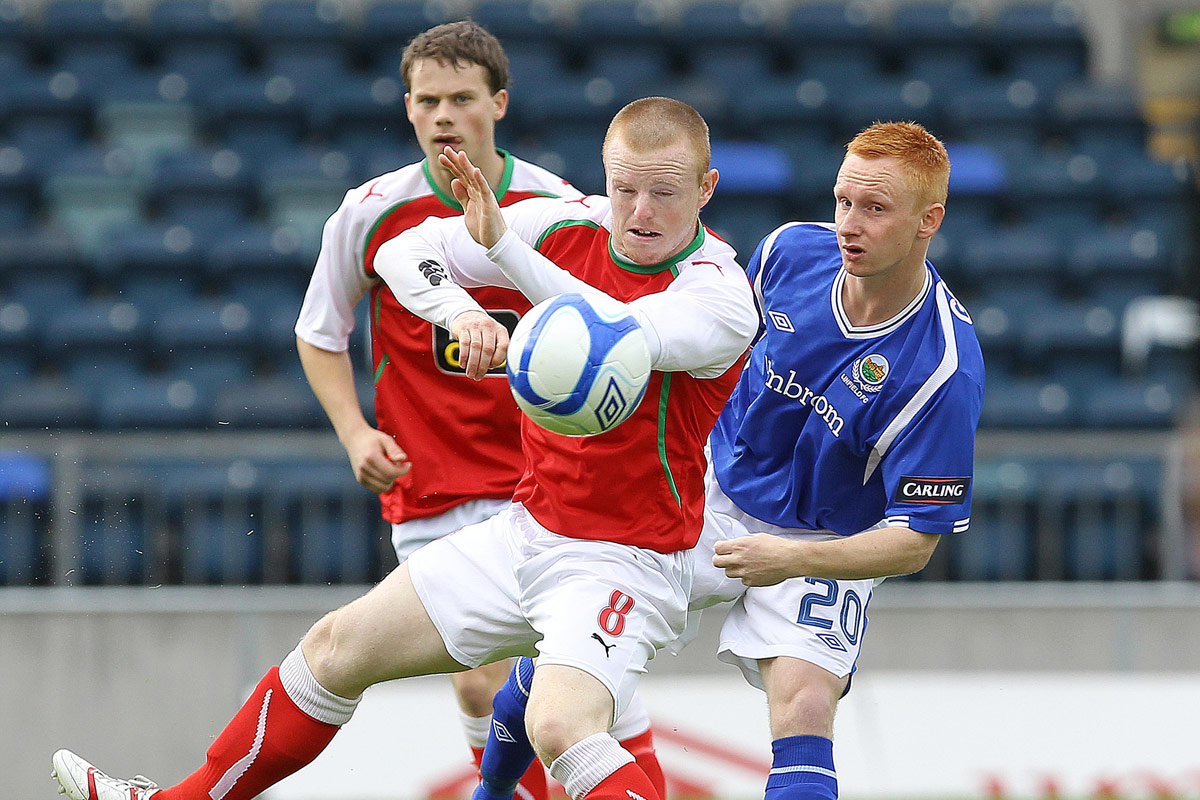 CLIFTONVILLE midfielder George McMullan believes last weekend’s defeat to Donegal Celtic will not affect the mindset of his teammates as they prepare for a trip to Windsor Park to face Linfield on Saturday.

The Reds have now gone three IFA Premiership games without a win but McMullan is confident a game against the champions can bring out the best in them.

Tommy Breslin’s side fought back from 2-0 down last Saturday at Solitude to level the game at 2-2 and seemed to be on course to push on for victory against ten-man DC.

However, a late Ryan Henderson strike stunned the home support and ensured the West Belfast club leapfrogged Cliftonville in the table.

McMullan admits their home form has been patchy so far but says it is almost a relief to be facing an away trip to the league leaders.

While some have blamed the synthetic surface for their problems at home, the Reds stalwart was quick to dismiss this notion and is hoping they can arrest their poor run of results on Saturday.

“It’s always a good occasion when we play them so we are all really looking forward to it,” he said.

“I think we are glad to get away from home because our form at Solitude hasn’t been great.

“Getting away this week is definitely one thing going for us. Getting beaten by DC last week was a big setback so we are looking to bounce back.

“I wouldn’t put it down to the pitch – definitely not. We are all scratching our heads wondering what has been going on but hopefully that is the end of it now.

“I think we need to learn how to hold on and not be as open when we get in front or level in games.”

Saturday’s opponents have not been hitting top gear either but have still been managing to grind out results.

A 3-0 home victory over Carrick Rangers ensured they remained on top of the pile on goal difference ahead of Portadown.

Cliftonville find themselves seven points behind David Jeffrey’s side going into this weekend’s encounter but will take heart from some fine performances at the South Belfast venue in recent years including a scoreless draw last season.

If past results are to be considered then there is little to choose between the sides and another tight encounter is expected on Saturday.

With the Reds’ fans sure to travel in numbers and crank up the decibels once the game kicks-off, McMullan reports that confidence is high within the squad that they can produce a performance and admits they must target all three points if they are to keep in touch with the league leaders.

“The fans love going over there and they don’t half enjoy the occasion and they always get the noise going,” he added.

“Morale is great with everyone. When you go to Windsor to play the Blues, who are champions, then everyone gees themselves up that wee bit more so it’s never a problem getting everyone up for that and everyone is looking forward to it.

“This is a big three points for us this week because Linfield and Portadown are starting to open up a bit of a gap so we can’t let them get any further ahead or they will be out of sight by Christmas.

“I don’t think we have been too bad at Windsor recently. We definitely haven’t made it easy for them over there in recent years so we don’t go there with fear.

“Even after a defeat like last week’s we will still go over there confident that we can get a result.”