Red Hands and Johnnies both vying to end title famine 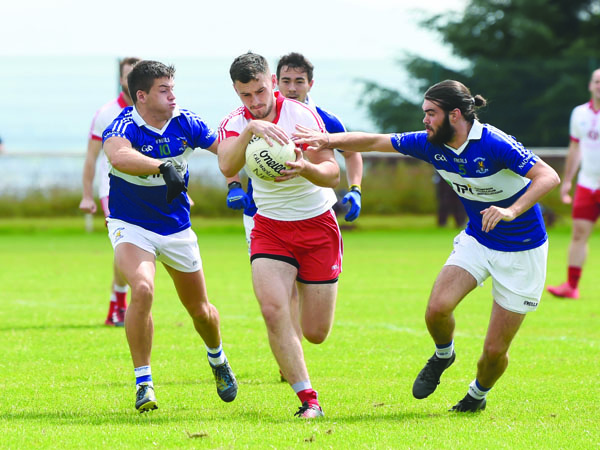 Lámh Dhearg and St John’s have met twice already this year, but Sunday's game is much higher stakes

ALL roads lead to Glenavy this Sunday for a West Belfast derby to decide who will be crowned Antrim Senior Football champions for 2017.

Whoever emerges between Lámh Dhearg and St John’s, it will be the first time either club has got its hands on the Padraig McNamee Cup since the turn of the century with the Red Hands last winners in 1992, while the Johnnies’ last success came in 1998.

Indeed, this will be the first county final without St Gall’s or Cargin involved since 1991.

With so much at stake and both teams confident it will be they who put years of disappointment behind them, a close and tense 60 minutes-plus is anticipated.

Both teams have shown their mettle to get to this stage, with the Johnnies advancing into the final thanks to a 3-17 to 0-21 win over Cargin after extra-time in Sunday’s semi-final replay at Glenavy. Their exertions are sure to have left some tired and sore bodies this week, but the prospect of a county final will surely revitalise those weary limbs.

One dark cloud from Sunday’s win however, was the sending-off of Simon McDonagh who will not be available to line-out at midfield for the Corrigan Park side, while his usual midfield partner, Ronan McCafferty is in a similar position as he received a two-game ban following his red card in the drawn game.

Ryan McNulty, who enjoyed a fine game in the middle for the Johnnies at the weekend is likely to remain at centre-field, but who partners him is the question with Matthew Fitzpatrick a possibility to drop back, while Jack Hannigan could be the man to deputise.

Paddy Nugent’s side have proven their credentials this term, finishing just one point off top spot in Division One, but the old adage around Corrigan Park is that leagues are for playing in and Championship’s for winning, so the big prize remains in sight.

An added dynamic to this game is the fascinating situation where Nugent will have one son, Padraig, starting in goal for St John’s while another, Domhnall is set to line-out at midfield for Lámh Dhearg.

He joked after the Johnnies’ win over Cargin he “may have to delete him from my contacts this week,” but said it is a great position to be in for all family members.

“It’s a great place to be in a county final. These lads (St John’s) are going out to win it, not to make up the numbers,” said Nugent.

“Ourselves and Lámh Dhearg have had many a battle, thinking back to U21 a couple of years ago so both teams know each other very well.

“I have huge respect for the Lámhs’ management they way they have brought those lads on too. It’s going to be a special final and we’re just glad to be part of it.”

To reach the promised land, St John’s will have to get the better of a Lámh Dhearg side themselves have made huge strides this year.

The addition of Fermanagh native, Ciaran Flaherty has added a new dynamic to their team with his physical presence, decision making and eye for a score perhaps the piece of the jigsaw that has been missing in recent years.

His link-up play has helped create opportunities for Ryan Murray and Paddy Cunningham who can be lethal in front of the posts given the chance, while Conor Murray’s craft is central to their cause.

The sides have met twice this year in the league, with each winning away from home, so really this will just come down to whoever can perform on the day and hold their nerve in what ought to be a great occasion with Antrim guaranteed a fresh winner following the domination of St Gall’s and to a lesser extent, Cargin.

“We have been in finals before, we played Cargin two years ago,” said Lámh Dhearg corner forward, Paddy Cunningham who is set for his sixth county final.

“We just set out at the start of the year to see where we could go and thankfully we have got to the final, but I do think we have been inconsistent up to now.

“We have played in fits and starts. We saw how dominant St John’s were in both their games against Cargin, they were very well organised and well-drilled.

“They punished mistakes very quickly, so we need to be on top of our game if we are to beat them.”

The senior final will be proceeded by the minor decider at 1.30pm when Rossa take on Aghagallon.

On Saturday, the Intermediate final takes place in Ahoghill when St Brigid’s meet Dunloy (3.15pm), which follows the Minor B final at 1.30pm.