Red Hands set to host Johnnies in game of the week 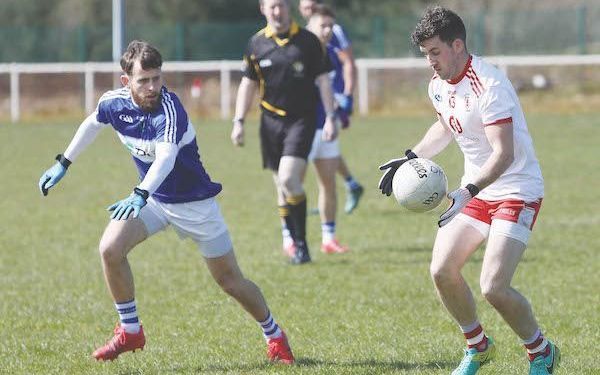 THE strangest of seasons moves into overdrive in the coming weeks, starting with the pick of this weekend’s football Championship clashes at Hannahstown as Lámh Dhearg host St John’s.
The game is a repeat of the 2017 county final clash between the sides which Lámh Dhearg won.
Indeed, the Red Hands are the only other team to have claimed the Padraig McNamee Cup in the last five years aside from defending champions Cargin.
The Toome men edged out Lámh Dhearg after extra-time in a memorable county final replay last year at Corrigan Park in what was an incredible Championship campaign.
Before that, the Hannahstown men played Portglenone over the course of three thrilling ties in the semi-finals.
Yet, it was a year to forgot for the Johnnies as they bowed out to Casement’s at the quarter-final stage – also after a replay.
John Kelly as assumed full control of the sideline this year having worked alongside Gearoid Adams in recent years.
While Kelly insists Portglenone were full value for their Championship victory last season, he says a lack of consistency in team selection owing to injuries meant St John’s never gained any momentum last year.
“Perhaps we underestimated Portglenone slightly – but they deserved their victory,” said Kelly.
“In the first game, we got a late goal to take it to a replay after playing the last 20 minutes with a man down. In the replay, we lost another two players. I think, on reflection, last year we were crucified with injuries.
“Out of a panel of 24, we had 12 players who picked up serious injuries last season which kept them out for two or three months. We went to games last year with only 16 or 17 fit players.
“We weren’t able to gather any momentum last year whatsoever and our plans were constantly having to change.
“We have been fortunate this year in that we’ve had very few injuries – I keep saying to the players that we can’t have bad luck forever!
“The way have worked out this season, we are just glad to be back and I think the new format is a good idea. We are up against two tough opponents in Lámh Dhearg and Rossa, but we’ve four Championship games and hopefully that will allow us to build up some momentum.”
St John’s have added Glen goalkeeper Ciaran McCloy to their ranks for this season as the Derry native is current based in Belfast.
His transfer allows former Antrim goalkeeper Padraig Nugent to return to the wing half-back berth he occupied during his minor and U21 days.
Lámh Dhearg’s prospects for 2020 also received a boost when Antrim star Ryan Murray returned home from Dubai before lockdown.
The attacker scored three points during last Sunday’s 0-10 to 0-7 defeat to Creggan at Hannahstown.
Lámh Dhearg coach Declan Bunting says he is looking forward to Sunday’s clash with Johnnies, but unlike John Kelly, he isn’t a fan of the group format.
“I think like everyone in the GAA world, we are excited to be back,” said Bunting.
“We might have though we weren’t going to get any football at all this year. We are looking forward to the Championship match with our rivals from down the road (St John’s) – they are a very good team with great individual players.
“I’m not fussed on the format if I’m being honest. I think it takes away from that buzz of straight Championship knockout, but with the year it is we have to accept it. The county board have done all they can to accommodate all team and the dual clubs.
“I think any time you play a local Belfast rival in league or Championship is always exciting.”
St John’s will face a quick turnaround following Sunday’s game as they host Rossa on Wednesday night at Corrigan Park.
Ideally, they would want to be going into that game on the back of a win and there is no real room for error in what is surely the most competitive of the Senior Football Championship groups.
St John’s appeared to fall back into the chasing pack last season having previously looked like one of the sides most likely to challenge current kingpins Cargin.
At full strength, they’ll be a handful for any side, but the home side will hard to defeat at Hannahstown especially with midfielder Pearse Fitzsimons back to full fitness after suffering a serious knee injury late last season.