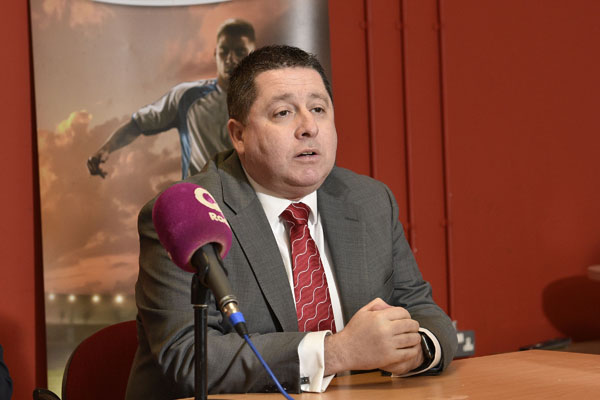 CLIFTONVILLE chairman Gerard Lawlor has hit out at the decision which will see the Irish Premiership’s final standings settled using a mathematical formula.

An independent football data consultancy will work in accordance with UEFA principles with a decision expected in the coming days with a title awarded, one team relegated to the Championship with one team promoted.

Linfield are currently four points clear of Coleraine with Crusaders in third ahead of Cliftonville on goal difference. Institute are bottom and are likely to be relegated with Portadown taking their place in the top flight. The same formula will be used to confirm relegation from the Championship and promotion from the Premier Intermediate League.

The news was confirmed in a statement from the Northern Ireland Football League on Tuesday morning and brings to an end weeks of meetings, debates and disputes on the best way to end the local football season in the wake of the global Covid-19 pandemic.

Several proposals were brought forward, but Lawlor stressed that Cliftonville always wanted to settle things on the playing field.

“Cliftonville, as a football club, have always maintained from the outset that we want to play football,” said Lawlor.

“Overall, we are disappointed that not enough clubs want to play football. We always wanted and believe the league should be finished on the football pitch.

“We are disappointed to get to this stage. Ultimately, the majority of clubs didn’t want to play football for one reasons or another. It is important to say that some of those reasons may have been because of genuine concerns. In some other case, I don’t think they were.

“That’s decisions to make for people running other clubs. For Cliftonville, we never wanted anything to be decided by a mathematical formula.

“We wanted it decided fairly on the football pitch and with integrity.

“Now it has happened, we’ve no control over it and it is in the lap of the Gods.”

In its statement, the NIFL Board, of which Lawlor is a member, outlined their stance for ending the season in this manner.

“The NIFL Board sought to consider the submissions provided by all clubs across each of the divisions and express their thanks for feedback and patience of all clubs during this challenging process,” the statement read.

“Throughout the process a range of options to either resume or curtail Season 2019/20 were appraised against the key principles of health, finance and sporting integrity and while each option impacted the key principles in their own specific way the Board has endeavoured to make decisions in the best interest of the NI Football League.

“With key information from UEFA and feedback from members now received, in which the majority favoured curtailment of the season - it is acknowledged that no decision could be made to fully satisfy all members but the NIFL Board believe the decisions are the fairest and most equitable, as well as the only viable options available.”

However, Lawlor has questioned the fairness of the process which could result in the Reds missing out on a lucrative Europa League berth.

It is understood the Irish Cup will be played next month with the winners gaining the final European slot.

Cliftonville are set to face Glentoran in their semi-final with Coleraine taking on Ballymena in the other last four clash.

However, in the event that Coleraine win the Irish Cup and finish second in the league, the final Europa League place goes to the team finishing third in the Irish Premiership, currently Crusaders.

Yet, Lawlor insists that Cliftonville had yet to play bottom clubs Institute and Warrenpoint and that even opting for the two-game scenario would have given the Reds a fighting chance of overhauling their North Belfast rivals.

“That was one of the reasons we wanted to play football. There is no integrity and there’s no sporting merit in missing out on £250,000 of prize money on goal difference when, with all due respect, we haven’t played the bottom two teams in the league when everybody else has played them at least once.

“Because teams didn’t want to play football, we had to look at another model which isn’t right in my opinion.

“Even the two-game proposal would have allowed us all to have played each other three times. For us to lose out in this scenario is totally unacceptable to us.

“If we had have played the 33 games and missed out on Europe then so be it, but not like this.

“I know people have said it has all come down to money and it has, but money makes the world go round and it makes football go round.”

Over the course of the last number of weeks, the reputation of local football has taken a bruising with a number of club chairs and owners issuing statements and engaging in a blame game on social media.

There has even been talk of rival fans boycotting certain grounds, but Lawlor hopes that time will be a healer when the protracted saga finally draws to a conclusion.

“It has been a very stressful time for us all,” added the Reds chairman.

“I can’t be responsible for anyone else’s actions. I would like to think that Cliftonville have conducted their business properly. We set out a position from the beginning - we wanted to play football. We kept in contact with the players as much as we could.

“There are relationships which have broken down between some clubs, but we’ve tried not to get involved in those as best we can.

“Through the Troubles, clubs have always had good relationships.

“I would hope that, through time, when we get over this pandemic there can be a rebuilding of relationships going forward.

“It has been three months of hell. It is difficult because every club has self-interest and everyone is trying to look after their own club, which I respect.

“It is now time to move on and close the chapter once and for all.”

It is understood the semi-finals of the Irish Cup will be played on Monday, July 27 with the final pencilled on for Friday, July 31.

There is still no decision on the Intermediate Cup semi-finals, but it is believed the IFA are keen to finish the competition.