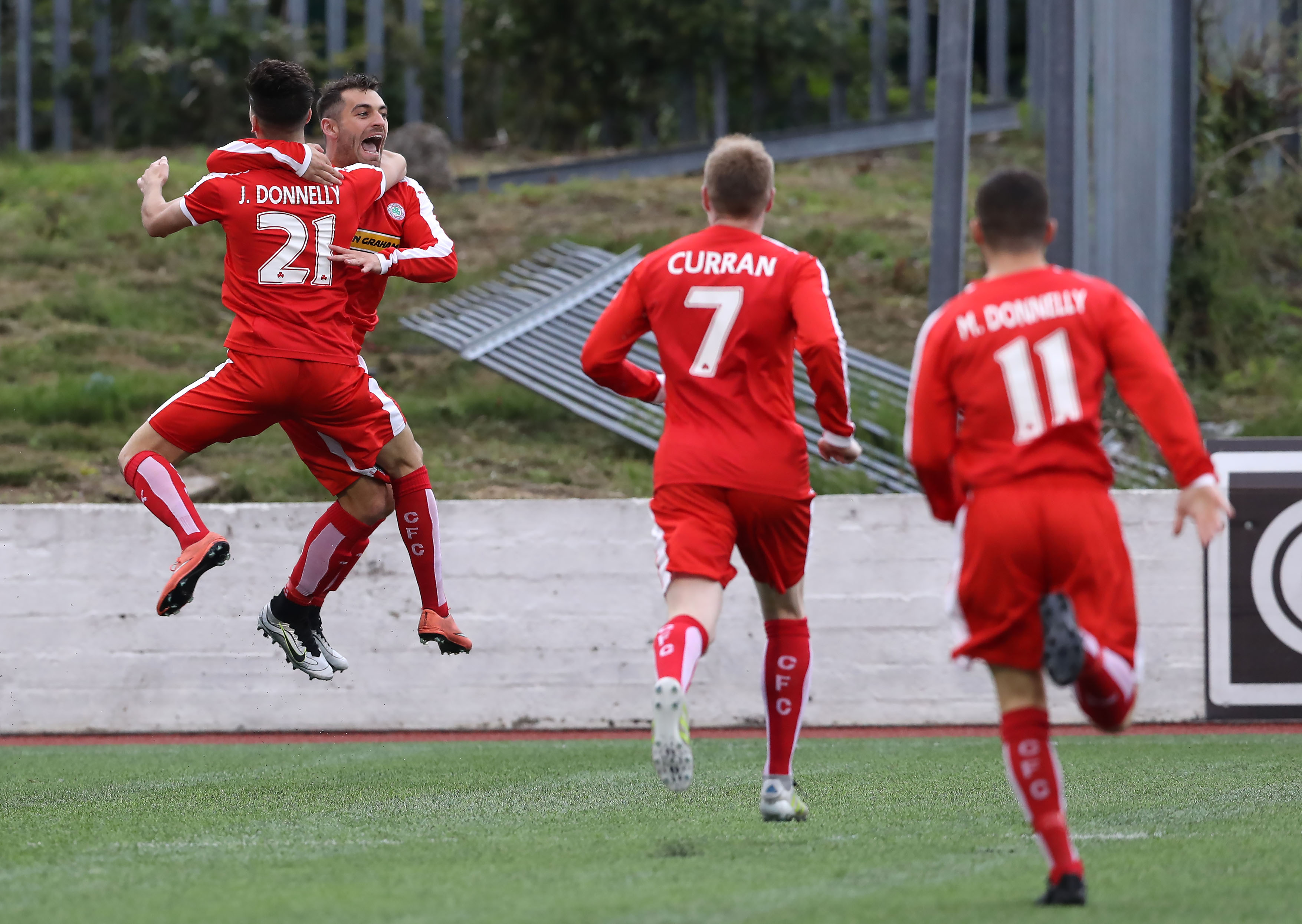 David McDaid is mobbed after giving Cliftonville the lead after just 72 seconds against Differdange last week, a goal that helped the Reds reach the second qualifying round of the Europa League where they will meet AEK Larnaca in the first round at Solitude tonight (Thursday). Reds boss, Gerard Lyttle is hoping the club’s fans start to give the Derry man the credit he deserves.

CLIFTONVILLE will be hoping to build on last Thursday’s excellent victory over FC Differdange when they take on AEK Larnaca in the first leg of their Uefa Europa League second round qualifier at Solitude tonight (Thursday).

The Reds scored a magnificent 2-0 victory of the Luxembourg club last week to complete a 3-1 aggregate win and like their preparations for the Differdange encounter, manager Gerard Lyttle will be relying on help from contacts across the water as they get ready to the meeting with the Cypriots.

“I don’t know an awful lot about Cypriot football,” said Lyttle.
“I would imagine it will be a step up in level. Obviously you take into consideration the heat and stuff as well, but Ricky McCann is good at getting stuff together as well with his resources with the Northern Ireland team, so he will try and get as much information as possible for us and we will try and piece it all together and see what we can do.

“We said after the (Differdange) game it sets the tone for us, it raises the bar and we’ll treat this game the same and hopefully be prepared and professional to try and get something as well.”

Last Thursday was another historic night for The Reds who made progress in Europe for the first time since 2010.
David McDaid gave Cliftonville a dream start latching onto Jay Donnelly’s flick on to rifle past Julian Weber to make it 1-0 after 72 seconds.

Differdange were dealt a further blow when Tom Siebenaler was shown a straight red card for clipping Jay Donnelly on the edge of the box on 56 minutes.
Cliftonville made their numerical advantage count with a quarter of an hour remaining and doubled their lead when Chris Curran sent a fabulous ball towards Jay Donnelly who turned the ball past Weber to make it 2-0 and secure a 3-1 aggregate win, setting up the second round clash with Larnaca.

Lyttle was more than delighted with his side’s first European progression since 2010 when they defeated HNK Cibalia and the Cliftonville boss revealed that a translation in quotes from the Differdange manager in the local Luxembourg press helped spur his side on.

“They were annoyed by the way we celebrated our goal out there and that gave them great motivation to go on and win the game.

“They were going to get at us early and if they went 1-0 down early enough it would give them time to score two goals so that was all the quotes we had and we spoke about it and that’s obviously what happened. We got the early goal but they couldn’t get the early goal. And yes, I did celebrate twice in their face,” joked Lyttle.

David McDaid scored the crucial goal in the play-off final to help secure Cliftonville’s place in Europe and the Derry native’s goal helped to settle any lingering nerves, much to the delight of his manager who is at loss to understand why McDaid is often ridiculed by sections of the Solitude faithful.

“It annoys me that Davy isn’t given enough credit and it annoys me that our fans don’t get behind him,” admitted Lyttle.
“I know Davy McDaid. I know what he is about. When ‘angry Dave’ is out he is a nuisance to play against.

“For me he is one of the top strikers in the league. On his day Davy McDaid is a top player.”

With European progress providing a further financial boost, Lyttle hopes to bring in a further player in centre-midfield, but is happy with the rest of the strength of his squad.

“We’ve a big enough squad at the minute but we are looking to add eventually,” confirmed Lyttle.
“I think we’re short in centre-midfield and we’re looking to maybe bring cover in there, but I’m happy with everywhere else in terms of wings, forwards and backs.
“It’s just probably centre-midfield and yes, we’ll look and see. If the right player comes along, hopefully we’ll sign him.”