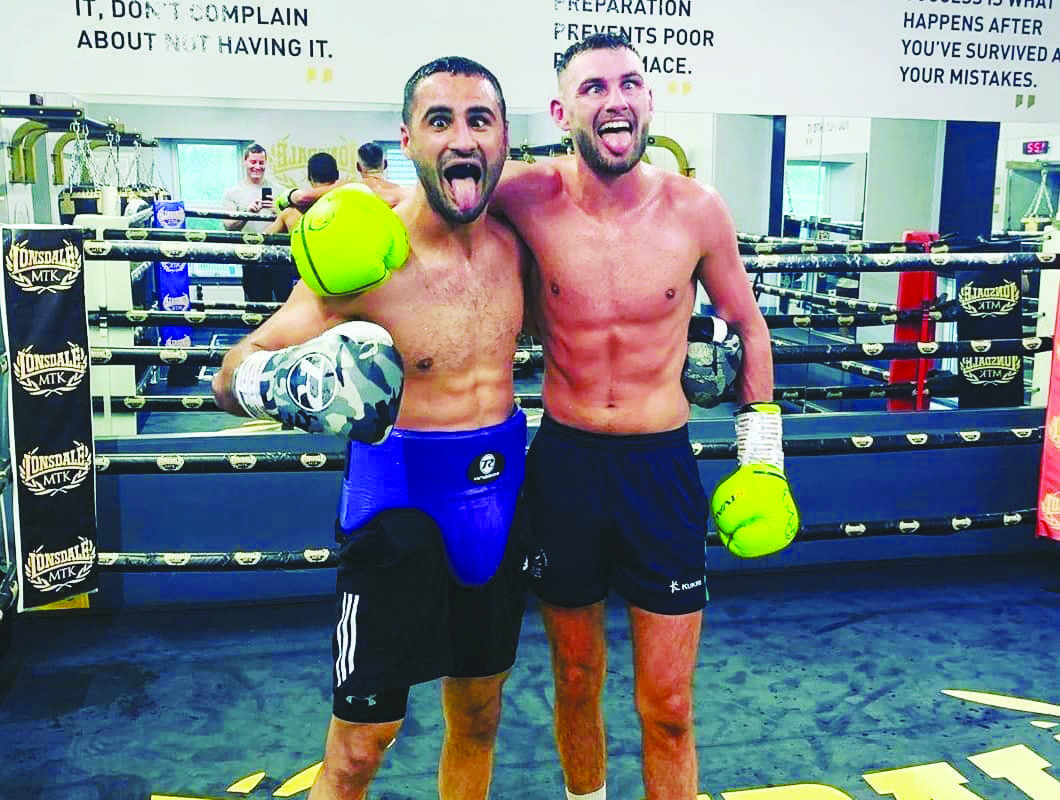 SEAN McComb says he is refreshed and ready for action as he gets set to make his ring return against former sparring partner Siar Ozgul in Wakefield, England tonight (Wednesday, live on YouTube and ESPN+ from 7pm).

Like everyone, the Turf Lodge southpaw has had to bide his time as Covid-19 disrupted all aspects of life but with boxing now embracing its new look with spectator-free venues, the ‘MTK Fight Night’ series is the latest to resume with McComb looking to pick up where he left off pair to lockdown and seeks to move his record onto 11-0 against his Turkish opponent.

‘The Public Nuisance’ returned to Glasgow to team up with coach Danny Vaughan in early June and while he admits it has felt like an eternity getting ready for this outing on the undercard of Jono Carroll v Maxi Hughes, the extended break and camp has given him time to recharge the batteries and then get back to work in order to make further improvements as he begins to move toward title contention.

“It’s a long camp but this is what it requires,” he said.

“It’s about how you manage the camp and make sure you don’t burn yourself out.
“I think I did that by managing my diet well, getting stronger and the time allowed us to improve in certain areas that we fell will be key in the fight.

“I think the (lockdown) break was good for me as I got a lot out of my system.

“I got to spend a lot of time with my family, friends and my girlfriend, getting to live a normal life for a while instead of constantly being on the go.

“The time at home helped me psychologically as it made me want to get back into camp and get stuck in.

“I’ve been lucky as some people can’t get a fight but here I am, just off the back of lockdown and have the chance to get straight into a fight that will push forward my career. The whole period has made me realise there’s no point sitting about complaining about things; you just have to get on with it and be grateful for where you’re at.”

Beneficial
McComb’s amateur career saw him box around the world, sometimes in front of sparsely packed arenas, so the lack of support apart from his team when he steps through the ropes will be nothing new.

However, he was quick to point out that such an environment can be beneficial as it makes it much easier to hear the corner’s instructions and not the roar of a crowd that can end up being counterproductive.

He also rejects the notion that sparring in a gym will be similar to what he will experience next week, stressing that a competitive fight is a world away from a spar.

“Sparring is different from a fight - you can’t lose a spar,” he stressed.

“In a fight, you are going to do what you have been training to do with tactics so it doesn’t matter if it’s an empty or busy arena.

“My focus will be more on tactics rather than entertaining fans as in a busy hall, you can hear a big roar after landing a combination or a punch landing then get sucked in by that, forgetting tactics and seeking blood.

“When I fought (Emiliano) Dominguez two fights ago and that was a great experience as I landed a good shot to the head and went mad towards the end of the first round. He wasn’t hurt but I thought he was because the crowd’s reaction made me believe it.

“He came back with a big right hand of his own and luckily enough I turned away and it just grazed me. When the bell went I knew I had gotten a bit carried away.”

His opponent, Ozgul, enjoyed a fine start to his career, putting together a winning run of 11 wins, but has dropped four of his last five including his last outing to former world title challenger Anthony Yigit, so has mixed it at a high level.

He and McComb have previously sparred, but again the ex-Holy Trinity amateur insists their meeting next week will be much different and he expects his fellow 27-year-old to be confident, just as he is.

“Yes, we’ve sparred and they were good, tough spars. In a small ring in the gym, that would suit him more than me, but I’m obviously confident I can beat him.

“He wouldn’t have my level of skill, but he just comes forward and works hard throughout.

“He’ll take punches to come back with his own, but I’m confident in my skill, tactics and brain that I will get the win.”

McComb still plans to get down to lightweight in the future, but will take this fight back at light-welterweight given his opponent has to move down from welter.

He was full of praise for the performance of new British lightweight champion James Tennyson at the weekend and hopes that one day down the line to join him at world level, but for now there’s a fight to be won next Wednesday and with so much uncertainty as to what may transpire with Covid-19 over the next few months, there is no point in making big plans for the rest of the year.

“We can talk about and plan things for the end of the year, but we just don’t know where we will stand,” he noted.

“Anything could happen with this coronavirus in terms of a second spike or not, so for now it’s just one fight at a time, spend money wisely and don’t get carried away as you don’t know what’s around the corner.

“I’m sure MTK, all the promoters and managers are taking the best precautions but nobody knows what lies ahead with this - it’s out of everyone’s control.”