Relaxed Irvine taking it one step at a time 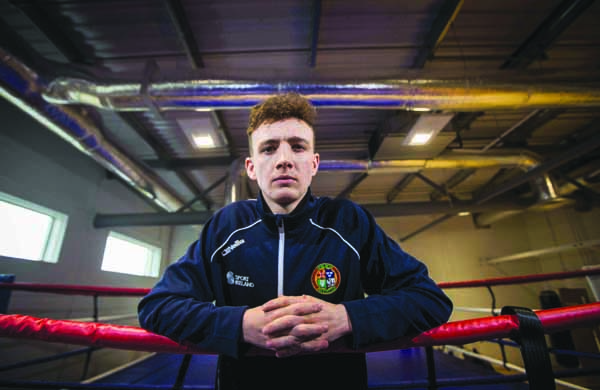 HE may be only 21 years of age, but Brendan Irvine will enter this week’s European Elite Championships in Kharkiv as one of the leaders of the Irish team.

You wouldn’t think that when chatting to the St Paul’s flyweight would was his relaxed self prior to heading out to the Ukrainian city where a podium finish is the only thing on his mind.

Irvine has vast experience at this level having competed in last year’s Olympic Games and taking silver at the 2015 European Games in Baku.

He enjoyed a productive couple of outings in the round robin tournament held in Dublin at the end of April, winning one and narrowly losing out in another against Russian opponents so he says he is ready to make an assault on European honours.

“All is well, training has went good. I’m relaxed and confident, just the usual so things couldn’t be much better,” said the West Belfast man.

“This is just another tournament. I just have to do what I have to do and that’s bring a medal home. That’s what everyone on the team will be looking to do.”

The Glencolin man was forced to wait around before seeing action in Rio. This didn’t help with the nerves he admits, so being pencilled in to box on Friday is a welcome scenario.

“That could help me because at the Olympics, I had to sit around and wait to get going,” he recalled.

“It didn’t help sitting around thinking about things so hopefully all goes well this time and if I’m one of the first ones, I can get the team off to a winning start.”

The recent issues involving the IABA and Sport Ireland have cast Irish boxing in a poor light, but those are simply issues outwith the team and the only thing on Irvine and his team-mates’ minds is success in the ring.

“They have just told us to get on with the boxing which is the right thing to do,” he said.

“People are asking me if I have seen this or that in the newspapers or on the TV, but being honest, I don’t have a clue what’s going on. I’m just like anyone else out there in that I don’t know anything about it. There is nothing I can do, so I’m just focussing on the boxing and that’s it.”

That is certainly the right approach for the Irish boxing team who have enough on their plate going in with medals and qualification for August’s World Championships in Germany up for grabs.

A last eight finish will see Irvine’s ticket stamped to Berlin, but his ambitions are higher this week.

“Hopefully with a bit of luck we will have a team that qualifies for the Worlds and I will be one of them,” he offered.

“I just have to take one fight at a time and break things down into simple things, one fight, one step and one day at a time. Slowly but surely you will progress into the next fight, next fight and then before you know it you have qualified (for the World Championships) or you have a medal.

“You have to try and stay on the podium at every competition you go to. Hopefully all of my hard work will have paid off in a couple of weeks and that’s the same for everyone on the team.”

The Ulster Senior Championships, pencilled in for September will act as a qualifier to next year’s Commonwealth games on the Gold Coast, Australia, but the chance to appear at another major games is the furthest thing from Irvine’s mind who says he is simple focussing on the job in hand.

“I’m not even looking at the Commonwealth Games,” he insists.

“If it’s there, it’s there, but I’m just looking at the Europeans for now and nothing else. If I get to the Worlds, then it will be them, not the Commonwealth Games. It’s just what I’m focussed on next.”