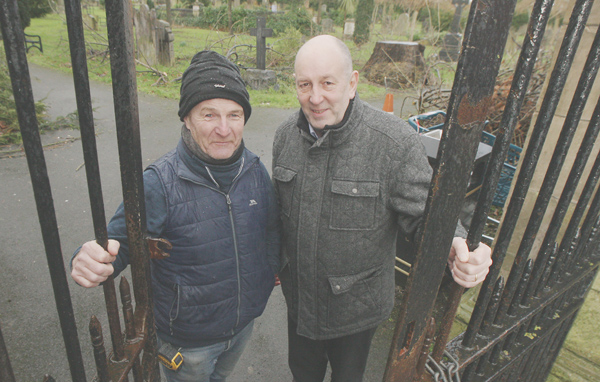 THERE have been renewed calls this week for Belfast City Council to re-open the historic Clifton Street Cemetery to the public.
The gates at the Henry Place site are locked to the public and can only be accessed by prior arrangement with Council officials.
Local Sinn Féin councillor JJ Magee seconded a motion brought by colleague Geraldine McAteer calling out Council for their neglect of the historic graveyard which has led to undergrowth along its perimeter walls and accelerating deterioration of a number of headstones.
Speaking to the North Belfast News, JJ Magee said: “We have tourist signs that guide walking tours and visitors from the city centre up to Clifton Street Cemetery only for people to find out the gates are closed.
“We are pushing Council to get the gates opened and make it a facility for tourists and local people.
“I have been disappointed with the slow response from Council so we brought forward this motion to get a report back.
“It is a massive asset for the people of Belfast with huge history. It is the jewel in the crown of Belfast.
“The Council say it is closed due to health and safety issues. Nature has caused damage with trees growing and it has really been left abandoned by the Council.
“Enough is enough. We need to start now and start fixing it up.”
The call has been backed by historian Joe Baker from Belfast History Project.
“Clifton Street is one of three ancient cemeteries in Belfast,” he explained.
“It is the most unique because it didn’t belong to a church. It belonged to the old Belfast Poor House at Clifton House.
“It opened in 1796, two years before United Irishmen rebellion.
“For me, the most remarkable thing is the diversity of graves. It is a small graveyard but there are 14,500 people buried in it.
“That is so many life stories. It is a very historic place. The largest famine grave and largest cholera grave is in there as well as the graves of famous names such as United Irishman Dr William Drennan and the McCracken’s.
“I am hoping it gets re-opened so people can learn more about its history.
“It is also one of the very few green areas in the district so it would be a huge asset to the local community.
“The Council say about costs and health and safety but that can be addressed very easily.”
The motion has been referred to next month’s People and Communities Committee to allow time for a report to be brought back by Council officers.
A spokesperson for Belfast City Council said: “We can’t make any comment until that report has been discussed at the March meeting of the People and Communities Committee, a decision made and subsequently agreed by council.”