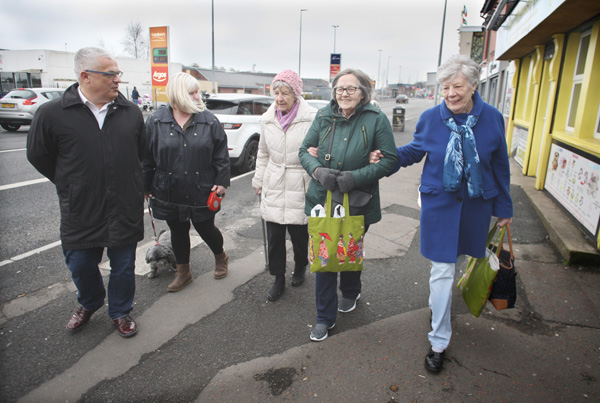 RESIDENTS say they have been left “angry” and “frustrated” after the removal of a bus stop that was taken away without any consultation.
The bus stop, which was located outside the Sean Graham bookmakers facing the Kennedy Centre, was recently removed while ongoing works to facilitate the Belfast Rapid Transit (BRT) system got under way. The decision has left residents of Lakeglen Crescent and Glen Crescent angry and confused.
93-year-old Bernadette Carson who has lived at Glen Crescent since 1935 said the removal of the bus stop will have a “huge impact on my dear elderly friends”.
“I remember the trams going up and down the Falls Road,” said Bernadette. “It is not right that our bus stop has been removed without proper consultation. I pray that people who are in charge listen to us.”
SDLP Councillor Tim Attwood said he had been contacted by several irate residents, many of whom are elderly and have young children, who now have to access the bus service by having to walk to the Glen Road, across a set of pedestrian lights, to get to the nearest bus stop.
“Neither residents nor I were made aware of any consultation or process that this stop was to be removed,” he said. “It is my understanding that this current bus stop has been removed and that a proposed BRT bus stop is now not going ahead after objections from businesses. It is a disgrace that there has been no communication with local residents who will be left inconvenienced by this.
“Translink have taken the decision to remove the stop – it is just not acceptable. I am organising a petition to lobby to reverse this decision.”
Translink confirmed that although the stop was temporarily relocated during the ongoing BRT infrastructure works, it has now been permanently removed from service as part of the migration to the new BRT halt locations.