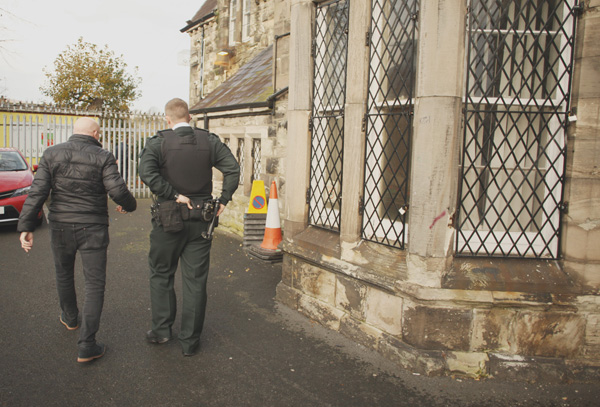 The noted community leader Reverend Bill Shaw says he has been overwhelmed by the response of the North Belfast community who have rallied around the Duncairn Centre for Culture and Arts following Sunday night’s break in.
Just hours after the biggest event the centre has ever hosted – RTE’s Other Voices – drew to a close, heartless thieves broke into an annex of the building and stole computer equipment.
The culprits climbed over a roof and bent back a security grill before breaking down doors with fire extinguishers. The damage is estimated to be in the thousands of pounds.
In the aftermath of the attack the community has rallied to Rev Shaw who said the centre is determined to bounce back.
“We have been overwhelmed with the messages of sympathy and support following the vandalism at the Duncairn,” he said.
Speaking of his “sincere appreciation” for all the support, he vowed to come back bigger and better, though he admitted the break-in was a bitter blow.
“I feel a mixture of anger and disgust. When I think of the heights we climbed on Saturday night with Other Voices it was just a momentous evening for the Duncairn, for the New Lodge and for North Belfast, and then to come in and find the place trashed just leaves us massively disappointed.”
Among those affected is a disability support group who lost a computer in the raid.
Sinn Féin Councillor JJ Magee said everyone in the community was united in their disgust.
“The Duncairn Cultural Centre is a prized asset for all the people of North Belfast and held the successful RTE Other Voices event over the weekend,” he said.
“Those responsible for this act must be held to account for their actions and I would appeal to anyone with any information to bring it to the police.”
The PSNI have appealed for information.
"Police would appeal to anyone who noticed any suspicious activity in this area to contact Police at Tennent Street on the non-emergency number 101, quoting reference 209 30/10/17.
"Alternatively, if someone would prefer to provide information without giving their details they can contact the independent charity Crimestoppers and speak to them anonymously on 0800 555 111."