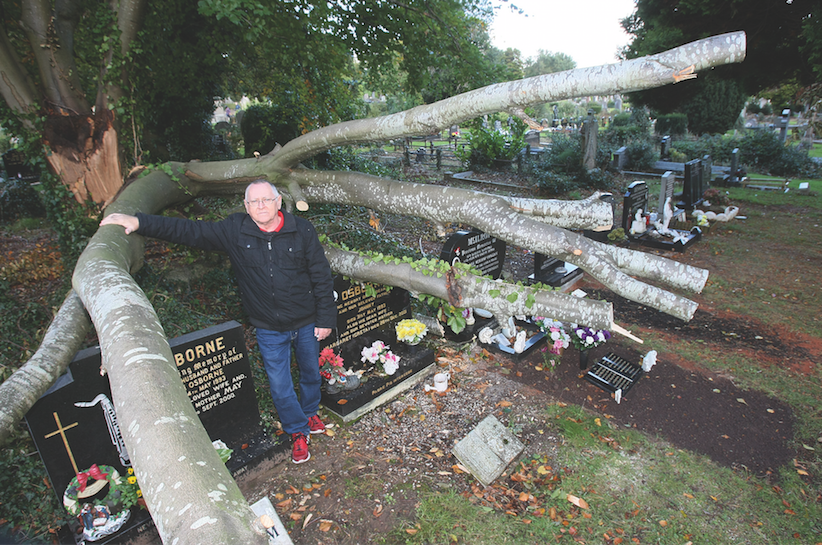 SHOCK: Gerry Osborne visits his parents’ grave in the City Cemetery where a tree lies on top of their headstone

A WEST Belfast man has hit out at “ridiculous health and safety rules” which have left Belfast City Council staff unable to remove a large tree that fell on his parents’ grave during storm Ali over two weeks ago.
Riverdale man Gerry Osborne says he was shocked when his son rang him to tell him that the tree had fallen down on top of his beloved parents’ headstone in the City Cemetery.
Speaking to the Andersonstown News at the graveside, Gerry said: “We can see my parents’ grave from the Falls Road and it’s a great comfort if you’re driving or walking past just to be able to see it.
“I always bless myself and say a prayer for them. My son was on the bus on this way into work when he looked over in the direction of the grave, he was shocked to see this massive tree lying on it, he rang me immediately and we headed up to speak to the cemetery staff.”
It was during the course of a conversation with Council workers that Mr Osborne was informed that Council employees are not permitted to use chain saws to cut away fallen tress and that they have to wait on an outside agency coming in to carry out the work. He was also told he and his sons wouldn’t be allowed to do the job themselves.
Gerry added: “I was shocked to hear this, I was more than willing to come up with my sons and remove the tree myself but I was told I couldn’t.
“The cemetery staff have been very helpful and sympathetic, but the tree is still here over two weeks later, and it’s not exactly small. What if one of us has an accident while we are here tending the grave? I understand that Belfast City Council’s hands are tied, they have been great, but we feel as if this outside contractor who has to carry the work out is in absolutely no hurry to do so, these are ridiculous health and safety rules.
“The cemetery itself is beautiful and very well kept by the staff, so whoever is responsible for cleaning up this mess needs to take a leaf out of their book and get on with it.”
West Belfast Sinn Féin Councillor Stevie Corr said: “Under health and safety legislation council staff are not permitted to use chain saws, they are going through the proper process at the moment, but I know that is of no comfort to the Osborne family who are clearly and understandably upset.
“I am a representative on the Strategic Cemeteries and Crematorium working group and I will raise this issue as a matter of urgency, I will also be raising the issue around giving our cemetery and park staff back the skills and authority to use chainsaws to cut down and remove obstructions like this. This is obviously outsourced and we want to bring it back in house again.”
Cllr Corr added: “The matter was only raised with me today and we are already working on getting it dealt with.”
A spokesperson for Belfast City Council said: “We are aware of a number of damaged and fallen trees at City Cemetery, caused by Storm Ali. A specialist company is working to clear these but, because of the amount of damage, this is taking some time. However, our contractor is working as quickly as possible and we hope to have all the debris cleared in the near future.”