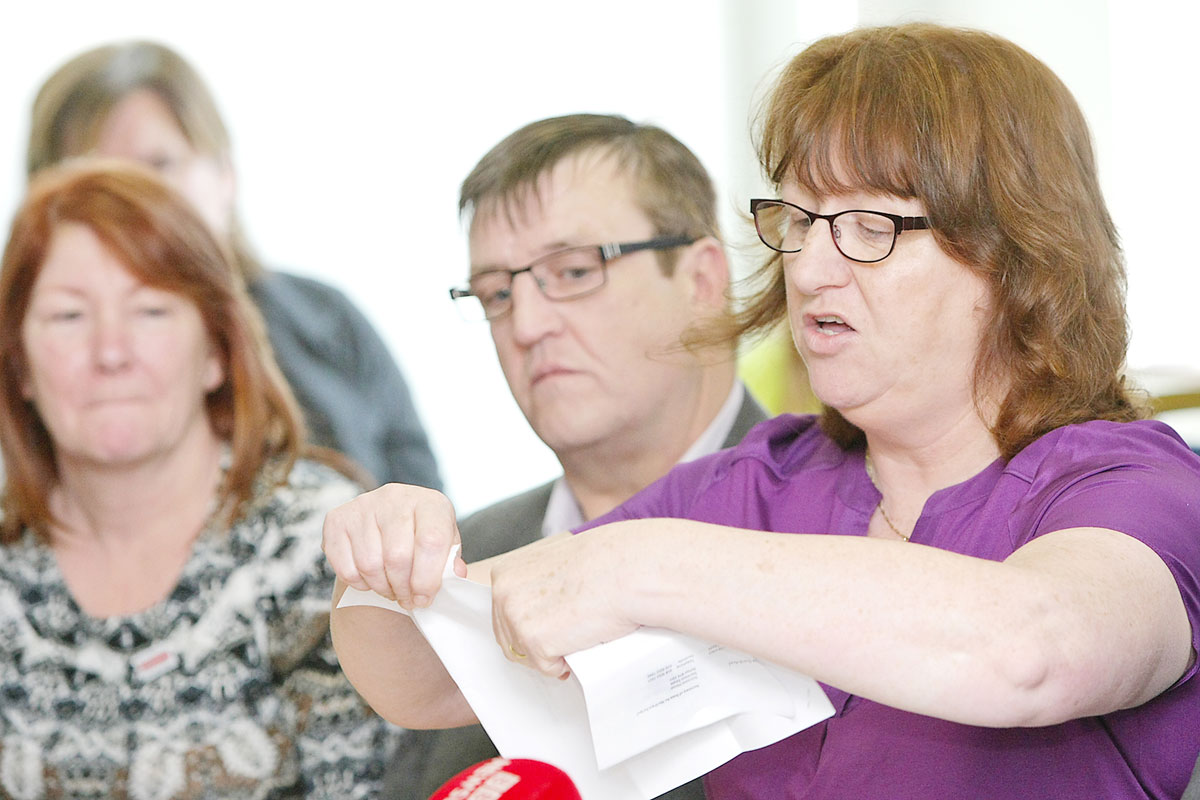 THE Ballymurphy Massacre Families have vowed that they will not be treated like “second-class citizens” after their call for an independent review into the killings of their loved ones was ruled out by British Secretary of State Theresa Villiers.

The families, who have been fighting for justice for 43 years, were made aware of Ms Villiers decision by letter on Tuesday morning. The decision comes two weeks after controversial comments made by Ms Villiers in Belfast that state murders should be given less emphasis than murders by paramilitaries.

In her letter Ms Villiers said it was her view that “the balance of public interest does not favour of establishing an independent review.” She went on: “I do not believe that such a review would provide answers which are not already in the public domain or covered by existing legal processes.”

Ms Villiers said she would meet with the Ballymurphy families and their representatives again “if they wish”.

Speaking at an emotional press conference at Clonard Residents’ Association, family spokesperson John Teggart, whose father Daniel was shot and killed, said the families “were shocked and outraged” at the British Government’s response.

“We have led our campaign for truth and justice in a dignified but determined manner and deserve the opportunity to have the innocence of our loved ones proven,” he said. “We feel that the Conservative-led British Government is treating us in a disrespectful and shameful manner.

“We have demonstrated flexibility in that our proposed approach is not a ‘costly and lengthy public inquiry’. It is a tried, tested and cost-effective model. The families have a message for David Cameron. When will you stop harbouring the murderers in the ranks of the British Army? No-one should be above the law. Are the 11 people who lie in their graves of different worth because they are Irish citizens?

“We the families will not be deterred by this disgraceful decision, in fact we will step up our campaign, shaming your government and your hypocritical policies.

“We will not accept being treated like second class citizens. Let’s be perfectly clear, you haven't seen the last of the Ballymurphy families.

“It is inexcusable in a country that claims to be a democracy that there has never been an investigation into the murder of 11 innocent civilians in Ballymurphy in August 1971.”

Briege Voyle, whose mother Joan Connolly was gunned down during the Parachute Regiment’s rampage, ripped up the letter from Ms Villiers, saying the Secretary of State was “just a puppet for David Cameron”.

Janet Donnelly’s 41-year-old father Joseph Murphy was shot on August 9, 1971, he died 13 days later of injuries he had sustained. Visibly upset, she told the Andersonstown News that she along with the other families just felt “numb”.

“I was eight when this happened to my family,” she said. “We literally found out at 9.30am this morning. We are all just on the verge of tears and anger. We really thought we were going to get something. If it’s a British soldier it’s okay, it’s not murder. Then what is it exactly?

“Disappointed isn’t even the word here, we are dumbfounded. The British Government have failed the Finucane family, they are failing the Ballymurphy families, they never fail to amaze.

“We will keep on, They are afraid, that is all it is. They know what happened in Ballymurphy, they are afraid. It is a mixture of hurt and anger for us now, but we will step up our campaign and keep going. It’s what we have been doing all these years and we will continue to do just that.”