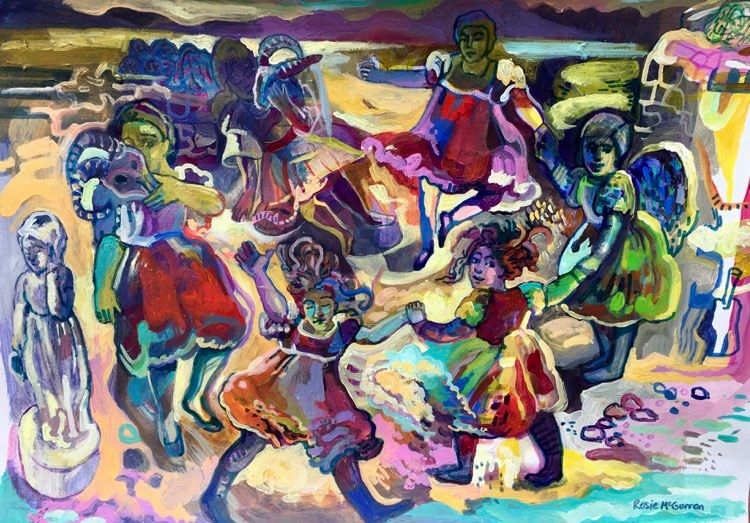 STUNNING: Rosie McGurran's 'We Will Dance for You on this Island'

What steps do people need to take to be a successful artist? If there was a formula, would it be obsolete as soon as people knew about it?

One thing is for sure, success comes in many different forms and no matter what talent you have there are often key moments in any artist's life which can help them on their way.

I first met Rosie McGurran R.U.A when attending a talk she was giving in An Chultúrlann about an exhibition she was having there. The milky other-worldly feeling of her paintings partly comes from the fact she often paints on dark canvas, meaning you are building up an image in a totally different way than if you start out with a blank white canvas.

Rosie went to school in West Belfast and attributes one of her key artistic development moments to Féile an Phobail where she was volunteering. In particular, she recalls an exhibition she installed in a butcher's shop (anyone remember the name of it?) which happened to be seen by an Irish Times journalist.

Surprise followed when she received phone calls from relatives in the South who told her of her new-found fame. She has since received many awards and commissions since and is included in collections both home and abroad.

Key to her artistic development was moving out of Belfast and finding herself settling in Roundstone, Connemara, where she was drawn to the Island of Inishlacken, just like Gerard Dillon one of West Belfast’s famous painters.

Channelling the spirit of Dillon's love affair with the Island, Rosie has been inviting artists there on residencies for a number of years, ensuring many more artists connect and capture the area for generations to come.

Little did I think the evening I went to her talk that I would end up being one of them!

Like many artists, Rosie has spent the time during the lockdown getting on with work in her studio. However, she has also taken time to launch a new website and a series of prints, as a way of democratising art.

If your interested in seeing Gerard Dillon’s paintings, the Ulster Museum has a large corner of his work in their Irish Art gallery, A world record was recently set for a Gerard Dillon, the Dreamer, which sold this year at auction for £378,000.

But art is not always about money.

As lockdown lifts on Friday so the artistic community prepares to open their doors and galleries for all to see. QSS Gallery opens with their Christmas exhibition on 12 and 13 December it’s a good idea to register to ensure maximum numbers are adhered to.

And you can finally get an opportunity to see Belfast Exposed’s exhibition ‘Becoming Christine’ by Amanda Dunsmore from Friday 11 December.

As I’ve said before Christmas exhibitions are a good time to catch up with artists. There are over 350 visual artists in various studio groups around the city — and that’s not counting the ones hiding away working on their own, rarely showing their work to the outside world.

Belfast print workshop (BPW), supported by Arts Council NI and based in the Cotton court, Cathedral Quarter,  is an important arts organisation which acted for me like a portal back into my artistic practice. A night class turned into, membership which morphed into board membership then chair, helping run a Gallery, and exhibiting which turned into, well that’s a story for another day.

BPW is running a series of classes in the new year, introduction to printmaking being one of them for any budding printmakers out there. If it’s the prints you're interested in, it’s worth a trip down especially to see it all in situ. They tend to pull out all the stops for the Christmas show. https://www.bpw.org.uk/ some prints are available online along with gift certificates.

This is a Sunday morning beauty is Dawn Shelter by Jackie Crooks
Size (framed) is 29x42https://t.co/FFubLoLCQe pic.twitter.com/fYXRYW4sP9

Hopefully you got to see some of the Bounce festival, the festival for D/deaf and disabled artists. Much of the content was deeply emotional.

I was first introduced to Linda Fearon’s work when she was on the stage at the Lyric, the work included stripping off and getting into a bath, the skin coloured body suit gave everyone a surprise.

This year her lockdown dance piece ‘Armour’ gave us an insight into her life, and that feeling that she must put on armour in order to survive in the outside world. Her love of dance shines through, and she has all the moves. It shows what talent can unfold when people are given the space and the time. What other talent is out there if only it could be nurtured?

The Boy in Pyjamas, developed by Kids in Contro,l focuses on Nigel who didn’t like to go out of the house until he joined a drama group. It was a delight to see his life unfold along with that of his co stars, again an emotional piece.

Die Hexen, simply gets a wow, for channelling a new state of consciousness.
Some of the performances are online for a limited time on University of Atypical’s Vimeo channel or on their facebook.

Jude Kuzma aka Bulletix was the University of Atypical finale.

I confess to dancing around the living room to autism pop. Jude writes all the music and songs himself and has been developing his talent for 12 years.

For 2021  he has a song called Belfast City of Life that would easily fit into a DJ set,  someone get him an agent. He wants to perform more and his thoughtful lyrics give people an awareness of what it’s like to be autistic, from sensory overload to  sometimes feeling alone.

Finally, Arts and Business supported by the ACNI have very quickly put up a Christmas gift guide if you are interested in a broad section of arts content in one spot.