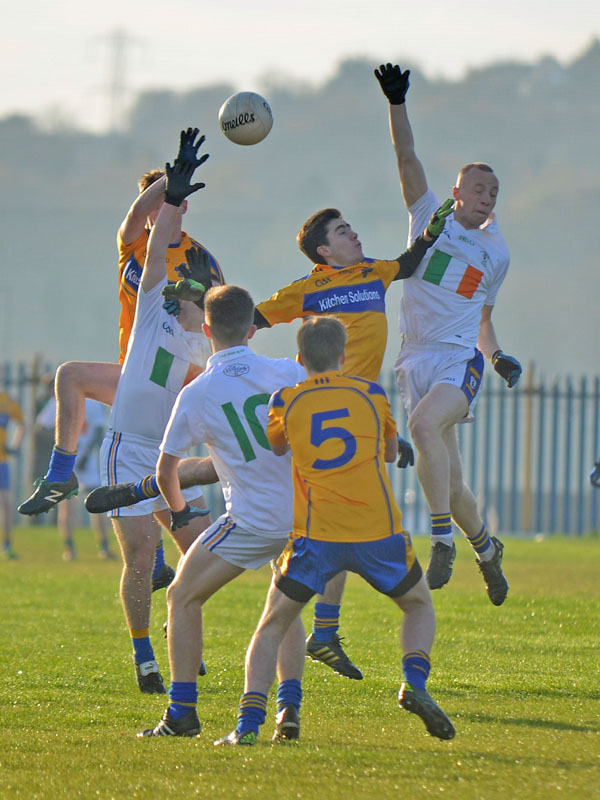 : An aerial battle in Sunday’s U21 quarter-final at Rossa Park

From David Mohan at Rossa Park

ROSSA advanced into the semi-final of the Antrim U21 Football Championship thanks to a handsome win over local rivals St Teresa’s at Rossa Park yesterday (Sunday).

The result was never really in doubt although perhaps the margin was a little harsh on St Teresa’s who battled gamely throughout and tried to find a way back.

However, it was the greater scoring threat of Rossa and midfield dominance of Gerard Walsh and Anthony Rowntree that proved decisive as Domnhall O’Neill’s side advanced into Sunday’s semi-final against St Enda’s at 2pm at Corrigan Park.

“We had to come and win today and we knew St Teresa’s would be up for it,” he said. “They are a good, young, fit team and that showed there today.

St Teresa’s opened quite well but failed to register until John Mallon kicked a free in the ninth minute by which time Rossa had points from Sean Pat Donnelly (free) and Gerard Walsh.

Donnelly kicked his second free of the day soon after before St Teresa’s hit back with a bit of a freak score when Eoghan Hamill’s shot dropped short but took a huge bounce up and over the bar.

This would be as close as they would get as Rossa started to take over with Chris Boyle and Darren Grego pointing before the first goal of the day arrived on 18 minutes as James Connolly took a pass from Boyle following a good Anthony Rowntree run and slammed the ball low into the net to make it 1-5 to 0-2.

Donnelly then hit another free to extend Rossa’s lead, but St Teresa’s dug in and pulled one back through Conor McCann on 25 minutes, but Rossa were to finish the half stronger with Donnelly kicking two frees and Micheal McGreevy scoring to leave them 1-9 to 0-3 ahead at the break.

The hosts were to pick up where they left off after the break as Chris Boyle pointed on the run, but on 35 minutes St Teresa’s thought they had given themselves a lifeline when Liam Gault swung his boot at a loose ball and rippled the net.

However, this score was to be wiped out immediately as from the restart Gerard Walsh gained possession and his long ball in was collected by Connolly who fired low into the net.
“It’s great when you can do that. It’s all about your attitude when they score what you do,” noted Rossa manager O’Neill.

“If you can answer like that it’s a bonus, but if you get any type of score or even an attack after a goal then it sends a good message out. We got the goal and that gave us the belief to go and close the game out which we did.”

Rossa did close the game out and could have had a third goal straight after when Connolly turned provider for Boyle whose rasping shot just cleared the bar to make it 2-11 to 1-3.

St Teresa’s did continue to battle with Paul Kennedy, John Mallon, Conor Mallon and Eoghan Hamill pointing with a Donnelly free at the other end Rossa’s only reply as the gap was narrowed to eight.

However, Rossa were always able to keep St Teresa’s at arm’s length with Grego and Gerard Walsh pointing. A couple of John Mallon frees and a Conor McCann free did reduce the arrears to seven, but in the final minute Rossa got the third goal they had been threatening when James Cooley slammed the ball home to put the icing on the cake.

“It’s a challenge with the quick turnaround and in these conditions,” said O’Neill.

“Ideally, we would like to have time for a session and then take them on, but that’s the way it has come this year and U21 is like that so we will give it a lash.

“They are a smashing team, very strong. People say they are strong, fit, good runners and things like that, but I think that does them a bit of a disservice as they have some class players as well like Ruairi Scott and young (Odhran) Eastwood as well.

“We have some good players too and we believe we can give them a game anyway. “There has been a rivalry between ourselves and them at this age group. We maybe think we have underachieved a bit, but no excuses. You have to go out and prove it and for a few of them this is their last chance to prove it before senior.