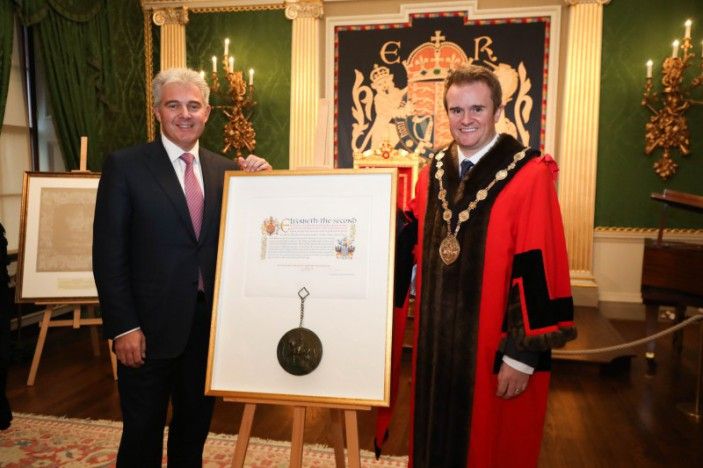 Secretary of State Brandon Lewis with the Mayor of Lisburn & Castlereagh City Council, Alderman Stephen Martin, at the unveiling of a the Letters Patent

A Carryduff councillor has branded Lisburn and Castlereagh Council's £400,000 expenditure on royal celebrations as "vulgar and excessive".

It comes after the Secretary of State, Brandon Lewis, visited Hillsborough on Wednesday for the unveiling of 'Letters Patent', which formally see the village become 'Royal Hillsborough'.

The Hillsborough Castle event was part of a wider programme of royal celebrations that the Council has backed.

"It’s an absolute disgrace that £400,000 was signed off at council last month for a programme of 'royal celebrations' for this," he said.

"It’s vulgar and excessive at a time when families in the real world face into soaring housing, food and energy prices.

"Absolute shame on all the parties that backed this."

The Mayor of Lisburn and Castlereagh City Council, Alderman Stephen Martin, said Wednesday's ceremony was a "a truly historic occasion".

"With the Letters Patent now signed, sealed and presented, the village has officially become known as Royal Hillsborough," the Alliance man said.

"This is an incredibly proud day as Hillsborough is now one of only four towns and villages in the UK with royal status and the first in Northern Ireland.

“This is a new and exciting chapter. It is only possible because of the many people who played their part in achieving this prestigious honour for the village. Whilst the name may have changed, one thing that remains is the warm and welcoming community.  I was delighted to be able to give our local school children a sneak preview of the Letters Patent and to explain their significance.

“I have no doubt that Royal Hillsborough will be a stand-out part of Northern Ireland’s offering to the world."