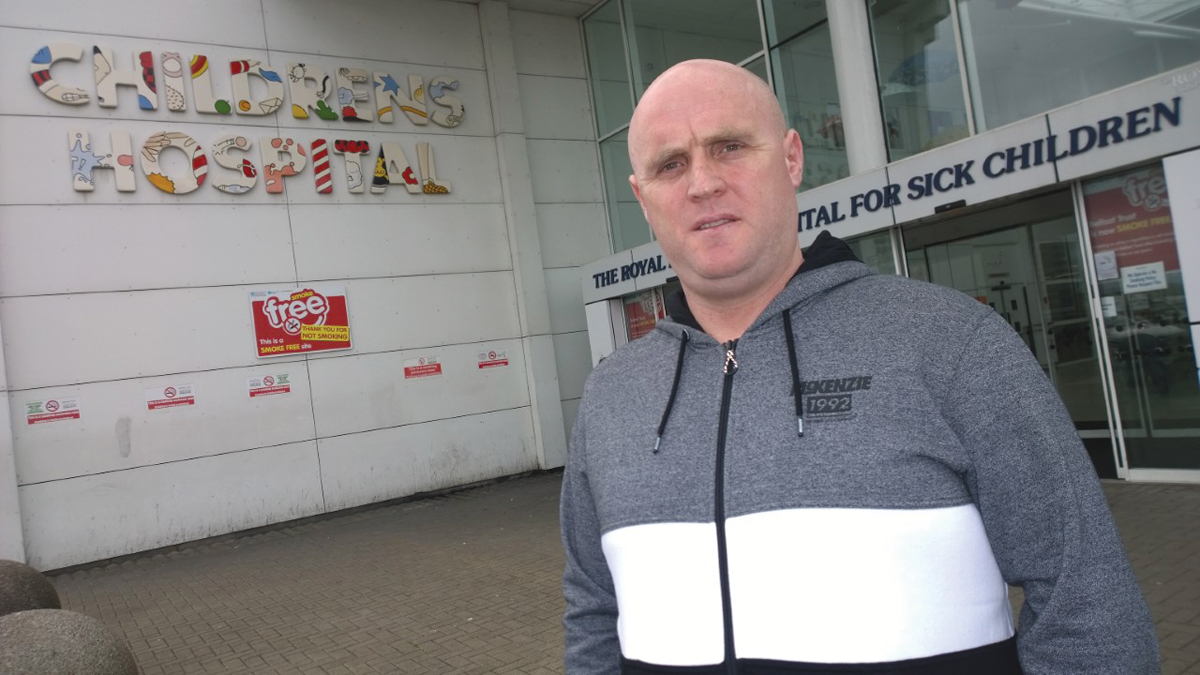 A LOCAL father has spoken of his anguish after his daughter was readmitted to hospital days after being discharged despite his protests she wasn’t ready.

Five-year-old Annabel Mongon was transferred to the Royal Victoria Hospital for Sick Children with a chest infection in February. Her father, Tom Mongon, questioned the hospital’s decision to discharge his daughter, and those concerns were realised when she was almost immediately readmitted and has remained since.

The child is currently in intensive care. Annabel is blind and has been in and out of hospital since she was nine months with a chronic but as-yet undiagnosed chest condition.

“Once they said she recovered from her chest infection she then developed diarrhoea,” said Tom. “She was discharged home but readmitted as her diarrhoea grew persistently worse, resulting in electrolyte derangement. She wasn’t really ready to go home, had she been dealt with on her first admission to the hospital four months ago then she might not be in for as long at this stage.”

Tom says he’s been told the circumstances of Annabel’s discharge are being investigated via the hospital complaints department.

Annabel has developed further chest infections which have seen her admitted to the Paediatric Intensive Care Unit.

“Her chest condition returned to her base line,” explained Tom, “but in order to optimise the care of Annabel’s chest her weight rise needs to be controlled, as she is currently 28.5kg but her ideal weight is 23.5kg.”

Tom explained Annabel had been under the care of a consultant for almost three years, but that has now changed.

“The consultant knew my daughter, she knew her well enough to know when she’s unwell and that she was in no way ready to go home.

“My daughter is no longer under the care of a consultant who knows her and her condition. Instead she has a weekly consultant who isn’t aware of her history, which is no good.”

Tom and his wife commute to the Children’s Ward in turns to stay with Annabel whilst the other looks after the couple’s three other children in Newry.

“It’s hard,” said Tom. “Doctors needs to show more consideration for the parents of children with special needs, listen to their concerns and do what’s best for the child. She was attending hospital since she was nine months old in Newry, who then transferred her here to the Royal Victoria Hospital for Sick Children in February. Over the years she has been allowed home for periods of time but mostly she’s kept in the hospital. She was readmitted to intensive care on Tuesday. She was diagnosed as blind at a young age. They said she had some sight at a recent check but it was later confirmed she has no sight at all.

“It’s one thing after another, ongoing issues and investigations. However, I’m grateful to the nurses in the Allen Ward, they have been so good to her.

“The most important thing for Annabel right now is to be treated and ideally I would call to have her transferred to Great Ormond Street for a second opinion and a diagnosis she she can receive treatment.”

A spokesperson for the Belfast Trust said they are unable to comment on individual cases adding: “Our staff continue to work closely with this family to care for their child.”