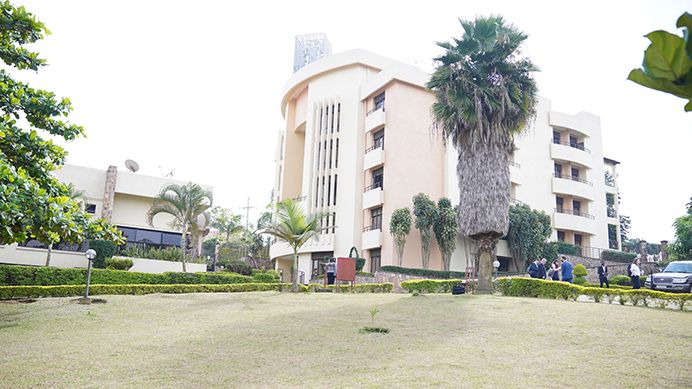 DESTINATION: The building in Kigali, Rwanda, where UK immigrants will be sent later this month

IT is now confirmed that on June 14, 2022, the UK government under the stewardship of the Border Agency, will send the first 50 of hundreds of immigrants to Rwanda.

The Conservative Government has refused to explain why they think that this is the best thing to do to people who crossed the channel on boats and goods trucks into the UK. When you look at the composition of the shameless Conservative Government, it has a fair representation of minorities. The Secretary of State for the Home Office, Priti Patel, is herself a third generation minority person. There is a whole list of Tory MPs who are British citizens by virtue of their migrant family history. Boris Johnson, the man who will definitely be removed as Prime Minister for his shambles at Downing Street, is himself a product of migration. He was born in the USA. The Bruce Springsteen goes something like this: ‘Down in the shadow of the penitentiary/Out by the gas fires of the refinery/ I’m ten years burning down the road/Nowhere to run ain’t got nowhere to go.’

Boris should know that this song was partly meant for him but he just can’t admit it. The relevance of some of the lyrics tells us a lot about Boris. On the morning of April 14, 2022, the British Prime Minister announced that people seeking asylum in the UK will be sent to Rwanda while they wait for their cases to be decided in the UK. So, you are put on the plane to fly to Kigali, the very beautiful capital of Rwanda, and you will stay in a hotel for months waiting for a third generation migrant’s ministerial decision about your plight. The Conservative Government scheme is known as Migration and Economic Development Partnership with Rwanda. I have nothing against Rwanda. It is a benevolent dictatorship.

Yes, freedom of speech and association is limited because of its previous history. In hindsight, Rwanda wants immigrants, its population was reduced by a huge number during the 1994 genocide and somehow, restarting the population can also consist of bringing new people. The question is, why is this Conservative policy only targeting specific races?

The vast majority of people seeking refugee status are approved, so it beats logic as to why government should unleash this long dispersal to Rwanda on them.

• Recently I wrote about language and languages and I do think that now we know that censoring and restricting language, people’s pride, is a useless endeavour.

In order to introduce the importance of language in our communities, we must try the benefits of different languages in our communities. Language has its strange and funny side and so for example when we took our daughter to a local nursery in Belfast a few years ago, by the third week she was coming back home cursing like a sailor. Now that is cultural integration – take it or leave it. I found it really funny. The wee toddler chatted away without a care and, for sure, a curse word it was. As soon as we moved to a different part of Belfast her previous curse word made a disappearing act, just like that. Luckily for her that word seemed like it didn’t exist, because if it did, it would have a great deal to answer for.

Language is a beautiful part of any heritage – curses and all.