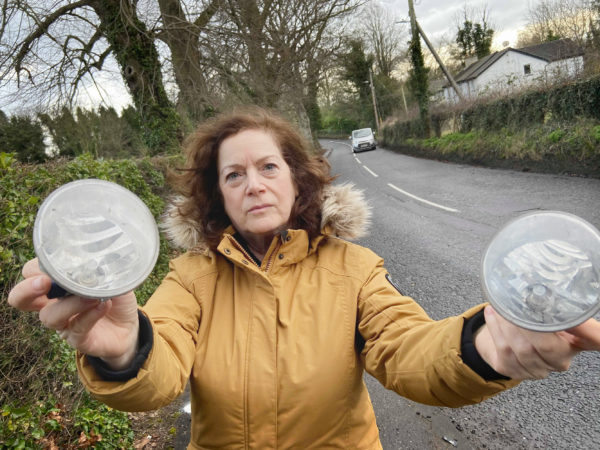 BLACKSPOT: Cllr Geraldine McAteer holding lights from cars that have had accidents at the bend in Dunmurry

A LOCAL political representative has welcomed plans from the Department for Infrastructure (DfI) to take safety measures at a “dangerous bend” on Dunmurry Lane.
Sinn Féin Coucillor Geraldine McAteer said the particular area had been the scene of a number of crashes and “near misses”.
“The DfI has informed me that they will introduce bend warning-signs on the approach to it,” she said. “In addition they will install reflective marker posts along both verges of the bend and put ‘SLOW’ road markings on both approaches to the bend.
“I am both relieved and reassured that this work is going to take place this month and I want to thank DfI for agreeing to the speedy implementation of health and safety improvements on this particular bend.”
Cllr McAteer said she had been contacted by constituents who had told her that their relatives had been injured in traffic collisions at the bend.
“When I have visited the site, the hedges are littered with debris from a number of crashes and it’s clear to see track marks of cars where they have actually driven up on the footpath.
“I am going back to DfI to ask that they reduce the speed from 40 to 30mph, as the speed limit is still too fast for the bend.
“I have also visited local residents on Dunmurry Lane who have great difficulty getting out of their driveways due to both the speed of traffic on the lane and the visibility as cars come hurtling around bends on this winding lane.
“Residents are requesting a lower speed limit and also the provision of ‘mirror’ style signs which afford better visibility of oncoming traffic.”