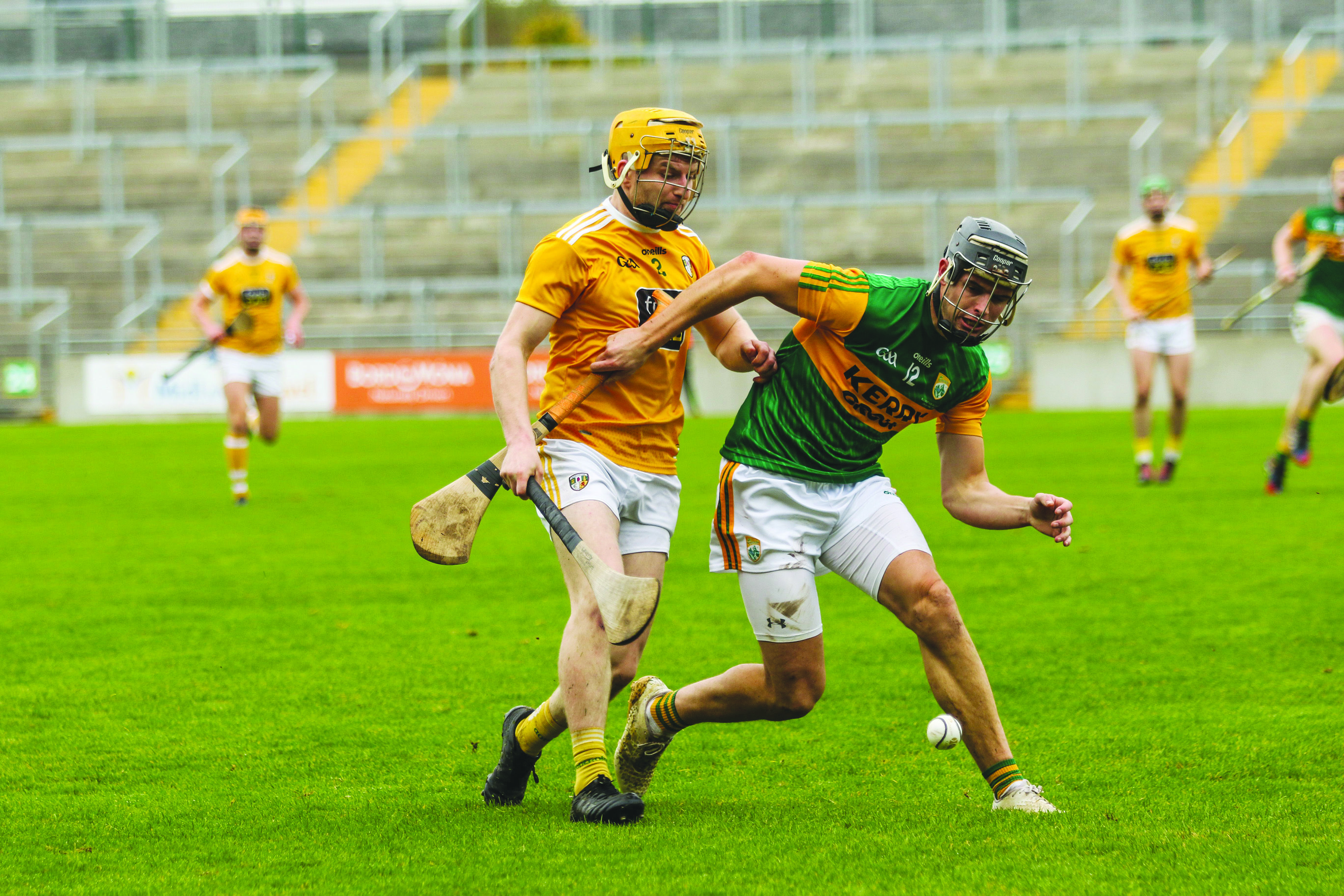 Antrim have beaten Kerry twice this year, including last month’s Division 2A League final (pictured) but manager Darren Gleeson warns the Munster men will be a much more difficult proposition when they visit Corrigan Park on Saturday

THEY have been the most familiar of rivals in 2020, but the stakes are raised again when Antrim host Kerry in Saturday’s crunch Joe McDonagh Cup clash at Corrigan Park.

The teams have met twice already this year in the National League, with Antrim emerging victorious in Tralee and then again in the Division 2A final last month, so Darren Gleeson’s charges will be confident they can make it a hat-trick of wins over The Kingdom.

However, Fintan O’Connor’s side have been boosted since their last meeting with the Saffrons in Tullamore as they welcomed back a number of players from county champions Kilmoyley including Paudie O’Connor, Maurice O’Connor and Daniel Collins.

They also travel to Belfast sitting top of the pile in the group with two wins from two, having defeated Meath in their opener and then putting on a fine performance to run out convincing winners over Westmeath in Mullingar.

Antrim did look a little below par in their draw with Carlow two weeks ago, but having played three tough games in as many weeks - a period that was also disrupted by Covid-19 cases within the squad - a break from action at the weekend was most welcome as it allowed time for a proper recovery and a number of injuries to clear up with all, including Neil McManus and Michael Bradley, fully back in contention this weekend.

“It was a good opportunity last week, the weekend and this week just to get a bit of work done one a few things we need to work on,” said Gleeson.

“There have been a few things hurting us a small bit and we’ve been at that. We’ve used it as a refresher on what we’re about and how we go about our business.

“You can get lost in three games in 13 days as everything just seems to flow (into each other).

“We then had the week off (training) with Covid and that when we had that going on, so this has been our first real opportunity in three or four weeks on the training field, so it’s been great to get the chance to do that.”

The Tipperary native stressed the importance of a result this weekend as two points will leave them with one foot in the final ahead of their final game away to Meath.

A defeat against Kerry could leave them in a precarious position, needing results to go in their favour of they want to reach the McDonagh Cup final for the first time, so with both teams and Carlow looking like the trio who are battling it out for two places, there is no margin for error going forward.

Carlow just about squeaked by Meath at the weekend to join Antrim on three points so that in itself is a warning that there are no ‘gimmes’ in this competition.

Indeed, Kerry have a solid record in Antrim having claimed a victory in their last visit to Corrigan Park during last year’s league, having ended the Saffrons’ McDonagh Cup hopes the previous summer in Cushendall.

Antrim did impress in victory in last year’s Championship and have those two wins this year already, but this is a new game and Kerry will be also be confident that victory is in their grasp should they get their performance right.

“Kerry will be coming with a different side,” warned Gleeson.

“They have three or four players coming in and positional changes there so this will be a bigger challenge to what they brought the last day in Tullamore.

“Kerry have won in Corrigan Park in the League and up in Cushendall in the Championship in recent years, then we beat them in Dunloy, so they won’t mind coming up here. We just have to be prepared in what we want to do and be concentrated.

“This is knockout stuff now. If we win at the weekend, then we have the destiny in our own hands and that’s what you want going into the last round of games.

“Kerry have Carlow in Tralee the following week so they’ll want to go into that with their own destiny, as we do going in the last day against Meath. That is going to be the main thing to take from this - it’s knockout hurling now and that’s a great thing.”

The depth of Antrim’s panel has been a major factor in their resurgence this year and despite losing key personnel at various times there have been players there to come in and make some huge contributions.

Domhnall Nugent was the hero of Carlow with his late goal and Ciaran Clarke’s performance against Westmeath was outstanding, but there have been many more stars of recent weeks across the board.

“Niall McKenna has been fantastic and a great option for a poc-out in the half-forward line,” noted the Antrim manager.

“He’s a direct runner and can score, so he’s been very impressive.

“Dan McCloskey has been a bit unheralded for us too so those players may be unheralded by some, but not by us as we know their work-rate and that’s what is expected from everybody when they pull on the Antrim jersey.”

Work-rate has not been lacking in any game this year and the same can be expected tomorrow in Belfast.

Kerry will pose problems with Shane Conway a constant threat, as can Mikey Boyle, Michael Leane and the towering Michael O’Leary, but Antrim have proven they can stand up to the challenge.

With rested bodies and a squad that is back to full fitness, Gleeson’s charges should be able to find the answers to bag two crucial points.