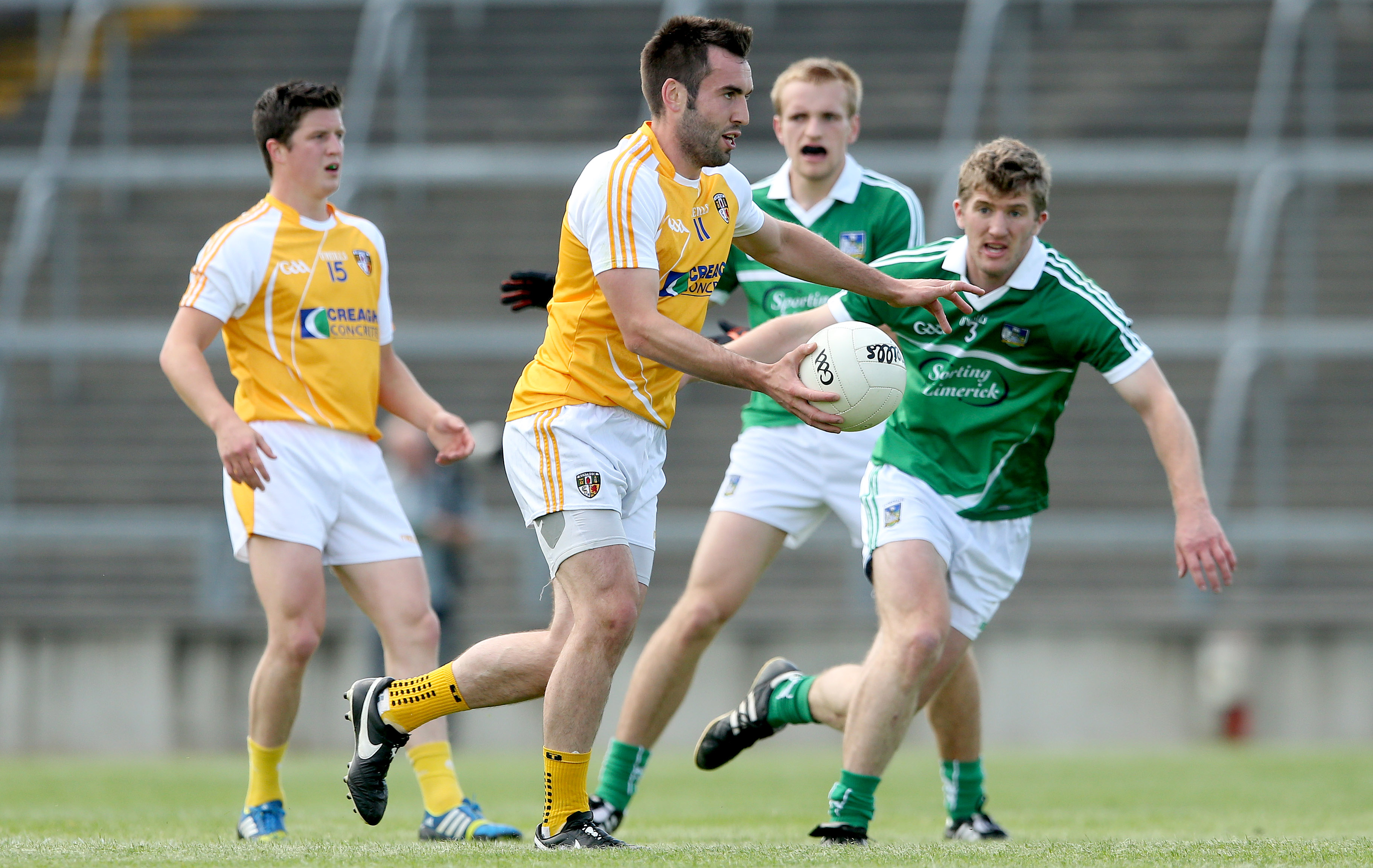 Antrim’s Kevin Niblock gets away from Johnny McCarthy of Limerick during the Qualifier clash in the Gaelic Grounds in 2014. The sides meet again in Corrigan Park on Saturday

THE Championship has thrown up some wide-margin victories thus far but Antrim boss Frank Fitzsimons is expecting a typical tough battle against Limerick in Corrigan Park on Saturday.
Two years ago, Fitzsimons was part of Liam Bradley’s backroom team as the Saffrons bowed out of the Qualifiers with a five-point defeat in the Gaelic Grounds.

The game proved to be Bradley’s last game in charge but Antrim’s Championship story in the last two years has revolved around heavy defeats in Brewster Park at the hands of Fermanagh.
This weekend, Antrim will be hoping to avoid another defeat to a team in green and their manager knows his charges will have to fight for their place in the next round.

“Hopefully we’ll not get caught up in the headlights and play our own game. It is going to be very tough because Limerick are a good side,” said Fitzsimons.
“Hopefully we will bring our ‘A’ game and we can get over the line. The last day (against Fermanagh) was a disaster. We are trying to forget about it and how we do that is to go out and give it our best on Saturday.

“We will make a few tweaks here and there. Nobody goes out to play badly - we know that.
“Sometimes it just happens but it seems to happen to us in the Championship, this year and last year.

“After that, everything lifted after we beat Laois in the back door. If we are lucky enough to beat Limerick, you never know what could happen.
“If we were in the draw on Monday morning, it would be fantastic for us and everybody would forget about the Qualifiers.”

Should Antrim progress, their reward could be a ‘glamour’ clash against one of the top teams in the country.

With the Qualifiers divided into a ‘A’ and ‘B’ sections, the pool of possible opponents are smaller. Mayo and Cork will be joined by the losers of the Donegal versus Monaghan and the Kildare versus Westmeath provincial semi-finals in Monday’s draw and they will face one of the four Qualifier winners from this weekend’s games.

“There are some big teams left in the Qualifiers,” added Fitzsimons.
“We will think about getting over Saturday, then see what happens.”

Antrim’s football Qualifier is one of two crucial Championship games for the county on Saturday with the Antrim senior hurlers replaying the Christy Ring Cup in Croke Park at 5pm.
The GAA offered the footballers to join the hurlers in Croker but the offer was turned down.

“It was a unanimous decision between the management and the players,” explained Fitzsimons.

“We all spoke about it. We feel home advantage, if there is such a thing, will be to our benefit and we would rather play it at home.
“We were unbeaten in Corrigan this year and we played there once last year and we won.

“Unless we go out and play to our potential, home advantage won’t matter on Saturday. This is the last chance and we know that.”

Since losing out to Fermanagh in the Ulster Championship, Fitzsimons and Gearoid Adams have been a number of changes to the panel with Davitt’s clubman Sean O’Neill drafted in along with Odhran Eastwood, Peter Healy and Oisin Lenehan.

There was also the chance of bringing Bredagh’s Alan Davidson into the panel but he was unable to transfer to the county and has since linked up with the Down squad. St Gall’s defender

Conor Burke is unavailable for Saturday’s game while his brother Sean continues to recover from a hand injury.
Fitzsimons, however, is more confident of Niall McKeever being fit to feature for the Saffrons.

The towering Portglenone midfielder was sorely missed against Fermanagh in Brewster Park but has been making good progress from a hamstring injury.
“Sean (Burke) played for his club for other day. I think his injury has healed a good bit,” said Fitzsimons.

“Niall (McKeever) is coming on slowly but surely. We’ll not know about Niall until closer to the game but, hopefully, he will be available for selection. He will be fit to play some part.”

McKeever’s presence could make a world of difference for Antrim against a Limerick team renowned for their physicality.

However, the Treatymen will be without both Cian Sheehan and Danny Neville after the duo opted to depart for America for the summer.
Both men featured for the Shannonsiders in their 0-16 to 0-13 Munster Championship defeat to Clare last month.