Saffrons look to bounce back against Farneymen 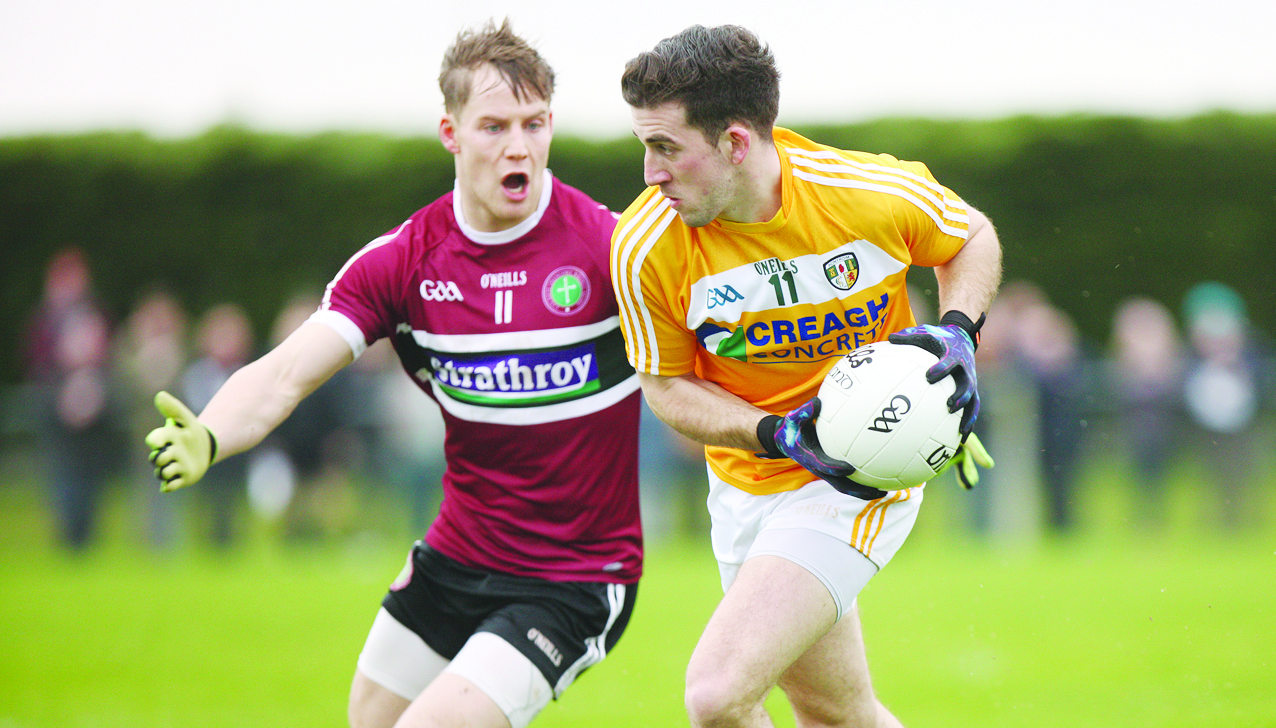 THE task does not get any easier for Antrim’s footballers this Sunday as the Saffrons entertain Monaghan in their second Dr McKenna Cup Section B game at Glenavy (2pm).

Last Sunday, the Saffrons fell to a one-point defeat (although most had a two-point margin) to St Mary’s in Glenavy although Antrim managers Frank Fitzsimons and Gearoid Adams did use the game to give starting debuts to seven players and introduced three other newcomers from the bench.

Still, two points would have set Antrim up nicely for the visit of the Farneymen this Sunday who opened their campaign with a 1-13 to 0-15 win over Fermanagh on Sunday.

David McAllister’s goal in the first half helped Monaghan into a 1-8 to 0-8 half-time lead and while Tomás Corrigan was sharp from frees for Fermanagh (who Antrim visit in their final game next Wednesday at Brewster Park, 8pm), Malachy O’Rourke’s side held on for the win.

Another victory for the 2015 Ulster champions will leave them with one foot in the semi-finals so they will travel to Glenavy with confidence and while Antrim know they face a tough test, joint-boss Fitzsimons says this is what they want at this time of the year and they will be hoping for a strong performance.

“It’s a massive challenge for us, but that’s what we want,” he insisted.

“You want to be tested by the best and stand up to them. Hopefully we can get a real good performance from the lads.

“You can’t have eight or nine boys making debuts and for everything to just go smoothly.

“It’s going to take time and you can see the young lads out there.

“They are as good footballers that we have in the county and they are buying in to what we are doing and they are listening to us.

“It wasn’t going to be all good today, but we are happy enough with that performance.”

Fitzsimons says he was happy with the majority of the players who were introduced on Sunday with first half substitute, Stephen Beatty particularly impressive around the middle.

The Rossa man kicked a fine score, laid on another and won one of just three marks on the day.

“He is a very good, seasoned footballer who is probably better known for hurling, but Stephen Beatty is a smashing footballer and what we saw of him in the second half there was good enough for us,” noted Fitzsimons.

“We will be looking at a few more (against Monaghan) and then we have the likes of Conor Murray back who just got married there. Big Marty (Johnson) should be back too.

“You saw ‘Fitzy’ (Matthew Fitzpatrick) playing for St Mary’s there and he is a class player. We can’t do without many players like that. We are where we are at the minute and we’re just trying to blood as many young players as we can.”

Prior to the McKenna Cup, the Antrim management challenged some of the younger players who had previous senior experience to push on this year and on Sunday one of those, Ryan Murray came to the fore.

The Lámh Dhearg man hit 1-6, 1-3 from play and Fitzsimons was delighted with his fellow clubman’s performance, but believes he can get even better.

“Ryan has stepped up and I’m sure that he knows and I know he can push himself on another five or ten per cent and be something really special, but that’s up to him,” he offered.

“Ryan is as good as there is in Ulster. He just needs to push on now and produce a performance like that week-in, week-out.”

Murray admitted he had a mixed day as alongside his impressive tally, four shots tailed wide and he says that statistic will be the one that sticks out for him.

“It’s the ones you miss are the ones you remember so I’ll be kicking the walls for the rest of the day,” he admitted.

“But it’s McKenna Cup and nobody is going to get thrown under the bus for taking a chance on it. I’d be disappointed as much as anyone, but it’s just good to get out and get a competitive match under your belt.”

The challenge of Monaghan also excites Murray who agrees it will be a step up from St Mary’s at the weekend, but despite the size of the task, insists Antrim will be going out with victory in mind.

“It will be a step up again,” he agreed.

“St Mary’s are a fit bunch and they are in the middle of their season you would say as Sigerson is just around the corner.

“You can see they are flying fit and have some big names from throughout Ulster, but Monaghan will be another step up.

“They will be blooding new players too so we will be looking for the win, but at this stage it’s more important to give people a chance and give it a crack.”