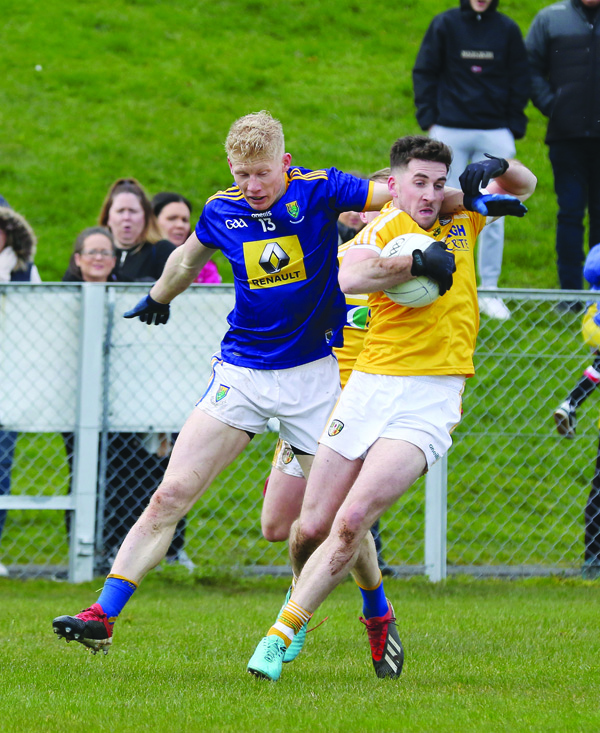 ANTRIM will complete their Division Four campaign this Sunday with a 500-mile round trip to Newcastle West to take on Limerick (1pm).

Prior to Saturday’s 11-point hammering of Wicklow, Antrim found themselves second from bottom in the Division Four standings with only London below them in the table.

A victory over the Treatymen on Sunday, coupled with defeats for Waterford and Wexford by Leitrim and Derry respectively, could see Antrim finish third in the final standings.

For Matthew Fitzpatrick, who contributed to last Saturday’s win with a classy 2-3 salvo from midfield, another victory would underpin the strides being made off the pitch by the players and the management team.

“I know you can say it is a dead rubber, but for confidence and pride we need to win,” said Fitzpatrick.

“It was embarrassing sitting second from bottom in the table, there’s no doubt about it.

“We should have had so much more. It is our fault at the end of the day. There is only so much the management can do. We go out and play and it is up to us to get another win to leave the table looking better than it did last week.

“We been beaten by a point on three occasions this year. I am sure loads of people have opinions on what has been going on. We were due a performance and we needed to give Lenny (Harbinson), Brendan (Trainor) and Fintan (Devlin) a performance. They’ve put in as much work as us and it was about time we done ourselves justice.”

A typically strong breeze at Corrigan Park contributed to a frantic first half with both teams enjoying spells of dominance before a series of Ryan Murray frees edged Antrim head by a point at the break.

The second half was largely one-way traffic with two goals from Fitzpatrick putting daylight between the teams.

Although the St John’s ace started the game with number eight on his jersey, he alternated between the middle third and full-forward with his pace causing Wicklow untold problems.

When asked about his preferred position, Fitzpatrick stated: “I do prefer to play further away from goals to be honest.
“When you are closer to goal, there are more men around you so you get more space out the field.

“You can make runs and get on the ball more. I was just happy that we got the win, most importantly.”

He added: “It has been a frustrating enough year as everyone knows. We’ve gone close on a few occasions, but it hasn’t been good enough. It was good to get the win and hopefully now we can kick on.

“The way the game is now, if you are in front, regardless of the wind, you can control the game so much more. The wind didn’t seem to be that much of a factor.

“They were better than us in the first half and they had a great goal chance. In the second half, the space opened up and we played the ball through the hands a bit more.

“When you have the wind, you tend to kick it a bit more because you feel you have to use the wind advantage.”

While Fitzpatrick’s 2-3 haul rightly drew praise after the game, the impact of Eoin Nagle off the bench didn’t go unnoticed.

The Naomh Éanna attacker played a key role in helping the Glengormley outfit reach the All-Ireland Intermediate Football final last month and he replaced his clubmate Odhran Eastwood at half-time on Saturday after the full-forward picked up a knock in the first half.

Within minutes of his introduction, he landed his first point before playing a part in Antrim’s opening major. Nagle collected a fine pass from Kevin Quinn before switching the direction of the attack to the far wing to link up with Fitzpatrick who finished with aplomb past Wicklow goalkeeper Robert Lambert.

The talented attacker is also set to feature prominently for the Antrim U20 team later this summer and Fitzpatrick believes his has a bright future for club and county.

“He (Nagle) is a cracking player,” said Fitzpatrick.

“He was obviously with St Enda’s all year so he has only been available recently. He plays with his head up, doesn’t take too much out of it. I thought he made the difference when he came on. He set up a goal and scored two points himself. He set up loads of attacks and I though he was outstanding.”