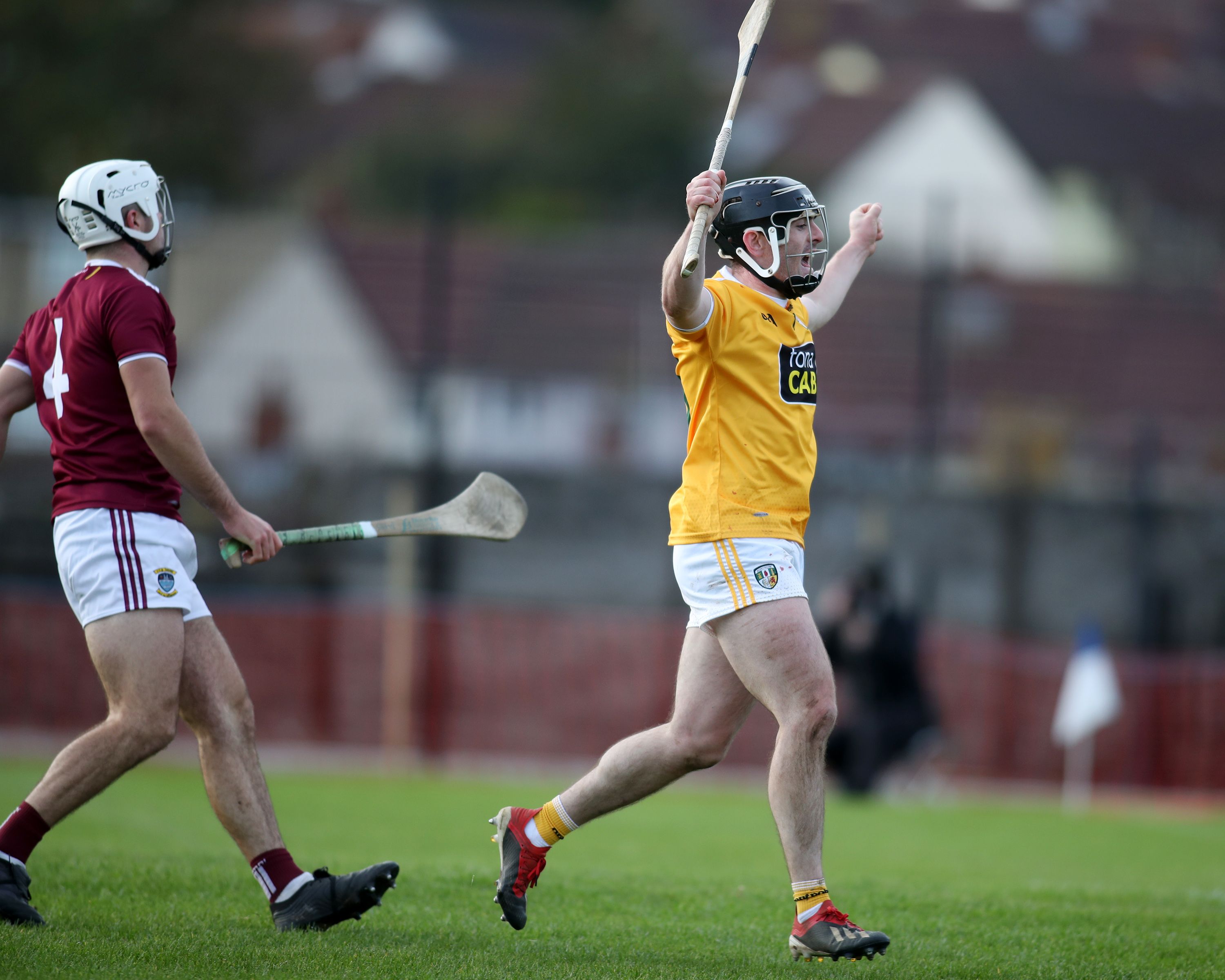 Ciaran Clarke was in sensational form, hitting 2-8 on the day John McIlwaine

ANTRIM got their Joe McDonagh Cup campaign off to a flying start as they produced a ruthless display to put Westmeath to the sword at a windy Corrigan Park.

Darren Gleeson was without six players who either tested positive for Covid-19 or were a close contact and had two isolate, while Neil McManus was also out with a hamstring injury's but this made no difference as their replacements delivered a hugely impressive performance to score a 19-point win that in no way flattered them.

"I'm very proud of that squad and anyone in that 32-man panel is there on merit," said Gleeson after.

"They all can contribute to Antrim going forward. The lads who couldn't get in (due to Covid-19) are well and that's the most important thing for us as none are really sick with this thing. Their safety is the primary concern."

Ciaran Clarke terrorised the visitors throughout and scored goals in each half, while having a hand in many other scores, while Gerard Walsh and Joe Maskey were on top form in the wing-back positions.

Westmeath have had the upper hand in meetings between the counties in recent years and with the wind at their backs in the opening period, they would have been keen to assert themselves, but it wasn't to be.

The lively Darragh Clinton did give them an early lead, but Gerard Walsh replied for the hosts who surged ahead on four minutes when Clarke collected a loose ball and raced through to fire to the net.

The visitors did respond well and led 0-6 to 1-2 at the water break with Clinton, Niall O'Bien and Brendan Murtagh on target, but this was as good as it would get for them as the hosts took a firm grip thereafter with Clarke finding his range and then setting-up team captain Conor McCann for a 33rd minute goal that helped Antrim into a 2-9 to 0-8 lead at the half having played some slick hurling throughout the opening period.

There was no let-up after the restart with Clarke and Murtagh swapping early frees before the points began to flow for Antrim through Clarke, Walsh, McCann and Eoghan Campbell and on 48 minutes, their third goal came as Dan McCloskey did excellently to win the ball under pressure and put Clarke through to bury to the net.

Their fourth goal came just minutes later as Aodhán O'Brien got on the end of a ball across goal to fire low into the net. Westmeath did hit back immediately as Niall O'Brien pounced when Ryan Elliott batted a long ball down to whip home, but Antrim were 4-15 to 1-11 clear heading into the final quarter.

The Saffrons kept their foot on the gas with Keelan Molloy and substitutes Damon McMullan and Simon McCrory finding their range with Clarke and McKenna also adding to their personal tallies as Antrim stormed home.

"It was good shooting in difficult conditions and hitting 2-8 into that breeze in the first half was great," added Gleeson.

"We only had three wides in the first half shooting into the wind, which was good so we were clinical.

"There are a few things we need to tidy up on but you have to be very happy leaving here with the two points.

"This is just the first game. It's a marathon, not a sprint, and we have three tough games to come."