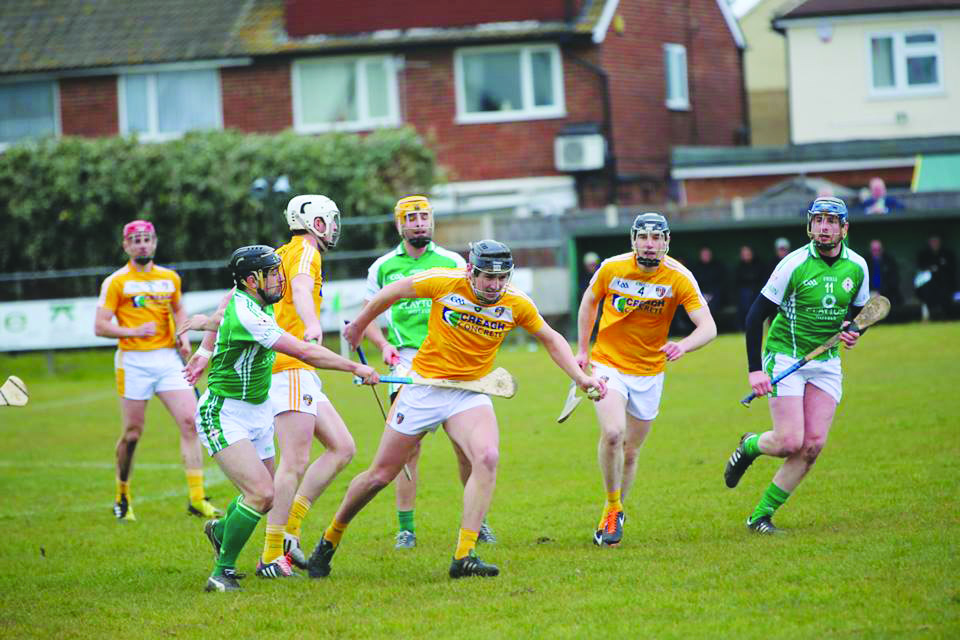 From Jamie Casey in Ruislip

ANTRIM finished their Allianz National Hurling League Division 2A with their third defeat in as many games after going down 1-21 to 1-19 to London in Ruislip on Sunday.

Knowing promotion was already beyond them, the Saffrons still showed up with a game attitude as they could yet leapfrog the Exiles into third place in the final standings.

With London still having a final spot to play for, it made for an entertaining first-half spectacle, with the sides level at seven points apiece after 20 minutes of play, having traded the lead on several occasions early on.

Each of Antrim’s first seven scores came from play, but they started to lose their accuracy in the remaining 15 minutes of the opening period, shooting four wides in that short time frame.

It allowed London to take control of the game as a fine pair of scores from play by Kevin O’Loughlin, who scored five points in an influential first-half, opened up a gap of more than one point for the first time in the match.

Exiles goalkeeper Eoin Kelly then produced an almighty free from distance before Bill Walsh stretched their lead to four, a deficit Antrim would face heading into the second-half with the half-time score at 0-15 to 0-11.

As the temperature dropped dramatically for the re-start, so too did the pace and quality of the game.

It took Shane O'Donnell’s goal on 45 minutes to breathe fresh life into the contest, the Fulham Irish forward pulling on a loose sliotar following a goalmouth scramble.

From there, London kept the visitors at bay until Niall McKenna wriggled through the London full-back line and netted an Antrim goal with six minutes remaining, which heaped pressure on Fergus McMahon’s men in the closing stages.

Eddie McCloskey, who scored three from play for Antrim in the second-half, reduced London’s lead to just two in the closing minutes, by which stage the visitors resorted to deep balls into their opponents’ box in search of a match-winning goal.

The hosts held their nerve, though, with Brian Regan leading by example at centre-half back as London saw out the game for a two-point victory.

Unfortunately for the Exiles, it wasn’t enough to secure a final spot, as Carlow’s win over Westmeath means those two will meet again in the promotion decider.

Saffrons boss PJ O’Mullan cut a frustrated figure at the end of the game and was left to rue some refereeing decisions he felt went against them.

“Again, the refereeing decisions that went against us today – I’m furious about them,” he said.

Although Antrim's hopes of promotion had already evaporated, O’Mullan insists he didn’t have to rally his troops for what was effectively a dead rubber for the visitors.

“I think they motivated themselves,” he said. “They’ve been disappointed with their displays to date, but just can’t seem to buy a bit of luck. London came out on top, so fair play to them.”

O'Mullan’s opposite number, Fergus McMahon, felt referee Eamonn Hassan had little to do with the outcome.

“I thought he was fair enough with both sides,” said McMahon.

“I felt a couple of decisions didn’t go our way, but overall the referee didn’t effect the result, it was our players and how we applied ourselves, and we’re happy enough with that.”

Antrim were missing players from All-Ireland Club finalists Ruairi Óg Cushendall, but O’Mullan refused to use that as an excuse for their below-par finish to the league campaign.

“Any player, at this level, is a loss. We’ve been going all season without some of our best players, but we’d only be making excuses and painting over things.

“At the end of the day, we had 15 out there and we used plenty of subs who were good enough to win that game, it just didn’t work out for them.”