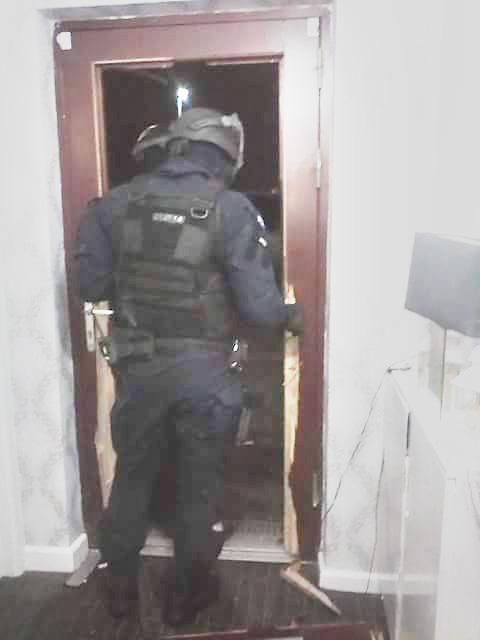 DAMAGE: The door to the home

SAORADH have hit out at housing association Clanmil for failing to adequately secure one of their member’s homes after his door was broken by the PSNI in a search operation.
And the housing association has admitted no replacement will be available until after Christmas.
Eamonn Hutchinson, 36, was arrested last week along with Matthew Charles Johnston, 37, of Carrick Hill and both have since been charged with test firing a firearm on November 28. As part of the operation Hutchinson’s Princes Dock Street was searched and the front door broken down.
According to a Saoradh spokesman, requests to replace the door have gone unanswered from Clanmil and the only protection offered to Hutchinson’s partner Lyssa and their six children is a plywood board.
“During a vicious PSNI and British Army raid on their home last week, soldiers rammed their front door off its hinges.
“Despite being contacted by Lyssa herself, Clanmil initially refused to fix the door – stating it was not their responsibility. Instead they sent staff out to block it with plywood.
“Following representation by Saoradh, and another local representative, Clanmil have given an obligation to replace the door but say they will not do so for a minimum of weeks.
“This is unacceptable and will not be accepted by Saoradh or the local community. This damage was caused not by the family, but by armed agents of the State. The refusal to rectify this by Clanmil means they are failing in their duty of care to a mother and six young children, with no fire escape available should there be an internal fire at the rear of the property.
“Saoradh demands this damage is rectified immediately and without delay to the satisfaction of this family.”
A spokeswoman for Clanmil said: "Following the incident, our contractor secured the property and a temporary door and frame were ordered, which have now been installed.
"A replacement composite door and frame have been ordered which, due to the manufacturer's Christmas holiday closure, will require between six and eight weeks to produce, deliver and install."