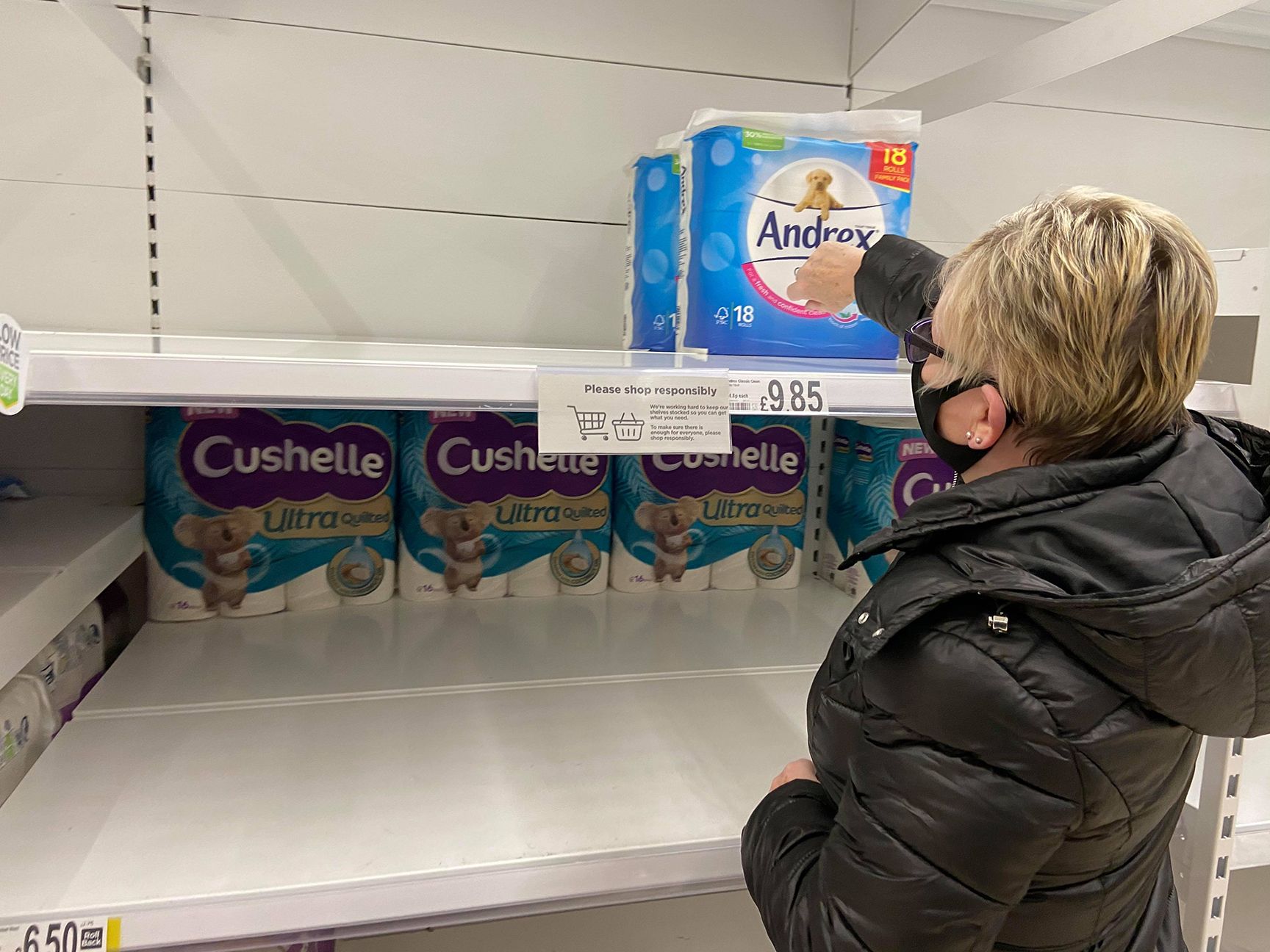 PANIC BUYING: The scene in Asda on Wednesday morning on the day new restrictions were announced by the Stormont Executive

SCHOOLS will close for two weeks from Monday and pubs and restaurants face new restrictions from Friday in a bid to stop the spread of Covid-19.

The moves are among new restrictions announced on Wednesday morning by the Stormont Executive.

Schools will close for two weeks, including the half-term holiday, until Monday 2 November, when their closure will be reviewed.

In tight restrictions to the hospitality sector, pubs, cafes and restaurants will be limited to takeaway and delivery services only for four weeks from Friday.

Other measures announced include:

·      Off-licenses and supermarkets will be prohibted from selling alcohol after 8pm.

·      No indoor sport or organised contact sport involving mixing of households, other than at elite level.

·      Close-contact services such as hairdressers and beauticians to close - apart from those relating to the continuation of essential health interventions and therapeutics.

·      Gyms to remain open for individual training but no classes permitted.

·      Places of worship to remain open but face coverings mandatory when entering and exiting.

The current restrictions on household mixing are expected to remain with no mixing of households in private homes - with exceptions including those joined in social bubbles of no more than ten people from two households.

Gatherings in gardens are also limited to six people from no more than two households.

As news of the new hospitality restrictions were announced, Martin Lynch, Chair of Andersonstown Social Club (PD) said the closure was "unfortunate but necessary."

"The PD has been to the fore. We were probably the first premises to close in the last phase,” he said.

"We have done everything we could to ensure the best protection for our members and customers. The club and the committee went out of their way to ensure that was done.

"I think the big thing now is the change of weather has forced people inside. The statistics show that an intervention was needed. There is going to be some debate around the effect of the new measures but as a committee, we felt it was needed to protect people in the community and wider society.

"It is unfortunate but necessary."

Laura and Jane Adams who are at the helm of Antrim Road’s Manny’s fish and chips and Sylvester’s café said that both businesses will be open for take-away, deliveries and collections.

“Social distancing will be adhered to and if that changes we will have to change again. At the minute we don’t have any problems with doing take away service and deliveries,” explained Jane.

“If this is going to help with the transmission of Covid then we are all for it. It’s very hard for some business to take that this is happening but at the end of the day hopefully we will be at the other side of it come the next few weeks,” said Laura.

“If it doesn’t, then the Ministers will have to come up with something to help small businesses as we are the ones that are struggling the most. In the next week or two we will be opening Pizza Guyz in the area and that will be following the small model of collection, delivery and takeaway as well.”

Kelvin Collins, owner of Ben Madigan’s Bar and Kitchen on the Antrim Road told the BBC it is "crunch time number two" for his business.

"It's a hard time for everybody," he explained.

“We voluntarily closed before the first lockdown because we were worried about customers.

“We had no choice but to try and survive the latest measures having put blood, sweat and tears into building up the business.

"We're coming into Christmas, it's normally a time of year where we build reserves for January, February and March of next year, there are a lot of businesses that are closing down now that might not reopen again."

Crumlin Star Youth said it was with “great sadness” that their academy and youth teams would be shut down for four weeks.

A statement read: “Unfortunately we were hoping that it wouldn’t come to this but from today our academy and youth teams will shut down for four weeks.

“Contact sport sadly was in the agenda which includes us as a club. It is sad to see as some clubs could struggle to get back from this, along with people’s jobs and businesses.

“After only getting ourselves back on our feet it comes with great sadness that we’ve to stop.

“The club can only apologise on our own behalf but as you all well know, this is well and truly out off our hands.

“Please stay safe, keep an eye on our page for further updates we hope and pray to see you all in four weeks time!”