Season on the line for Reds and Blues in Cup clash 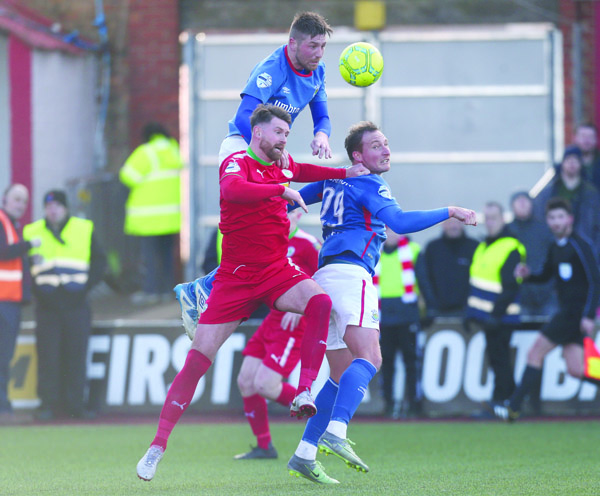 Cliftonville manager, Barry Gray has been scathing of his side’s recent form that included a defeat to Saturday’s Irish Cup opponents, Linfield

CLIFTONVILLE manager, Barry Gray insists that there is no room for excuses ahead of Saturday’s Tennent’s Irish Cup quarter-final with Linfield.

The Reds travel to Windsor Park (3pm kick-off) with both sides laying their season’s on the line in a last ditch bid for silverware.

Defeat for either leaves the European play-offs as the only available avenue for that jackpot at the end of the season, but for the winners there still remains that safety net of qualification through the cup with the added bonus of silverware.

Gray believes his side is capable of clinching a spot in the last four, but is unsure as to which side will be up for the cup come 3pm on Saturday afternoon.

“There’s no room for excuses any week,” insists Gray.

“On Saturday, collectively as a team, we get to decide whether the season is over or not, that’s the harsh fact of it.

“We have now pencilled off every opportunity we have had of something, rubbished it and moved on and this is the only one we have left.

“This is the only green stalk that’s there, otherwise we’re looking at best for a play-off position for Europe. Can we do it? Most definitely. Can we beat Linfield at Windsor? Yes.

“Which team shows up and what team is hungrier, I would love to be able to answer that question, but it’s obvious that I can’t.”

Defeat to Glentoran on Saturday left Cliftonville’s hopes of a third place finish almost dead in the water and the Blues clash a potential season definer.

Gray believes his ‘A team’ is needed to beat a Linfield side that he believes aren’t do dissimilar to his own.

“There isn’t a great pile between both sides and I bring it back to us because it’s always about us for me,” reflected Gray.

“How do we get that ‘A game’ out or get them firing and going? It certainly won’t be through a fault or hesitation of me trying to do that, but when you have 11 players like today (against Glentoran), you look hard at one of our players from the 14 that got on and say they had a good game. That is worrying stuff.”

Gray was extremely unhappy with his side’s display in the Glentoran defeat and revealed his dismay at the culture he perceives exists in within his squad.

“I said to the players inside, I didn’t come to do this job,” he stressed.

“This is a babysitting job at this minute of time and it’s textbook answers, excuses after excuses, trying to back them and do whatever you can to put them in a positive scenario.

“If it’s not low confidence, it’s they don’t know the shape or the system and if it’s not that case, it’s something else and something else. The bottom line is, what I want and they want seems to be two different things.

“Does majority rule or do I rule, or what do you do in the middle to try and make it work? Even when you ask them questions about what we need to do to go forward, nobody has any answers because they’re happy enough with everything that’s done.

“The bottom line of it is, (they’re) spoilt rotten, lifted and laid, too mollycoddled and don’t do enough for it. I came up through an era where whatever you had you worked for it.

“That is definitely not the culture in the squad of players I have in that changing room.

“It’s more of the same isn’t it? It’s all on me at the end of the day. I’ve said that to the players inside, I didn’t come to Cliftonville to have this job – trying to motivate top quality players to play for Cliftonville.

“At Warrenpoint, it was to try and deliver the impossible from players that maybe didn’t have the same ability levels as what we have at Cliftonville and it was ten-times easier.”

Gray admits his side’s recent run of form has left him pondering his own future at the club, but insists Cliftonville have the quality to turn their season around.

The Reds’ boss also admits he was aware of the challenges and cannot use the excuse that the problem has been inherited.

“Me working it out or wanting to work it out , it’s not enough. That isn’t shrugging it off,” argues Gray.

“I have a question to answer in terms of whether I want to work it out because this isn’t what I came here to do for Cliftonville.

“You don’t work out mental weaknesses, you don’t answer some of the questions that we’ve had in the last 10 weeks.

“I’m not saying I’ve all the answers or I’m the best manager in the world, but when we work hard and when they do what they’re asked to do, we look good. We knew we had the challenges, don’t get me wrong.

“I was fully aware of what I was taking on at the time and we dealt with some of those challenges early on in the season and we seemed to have put them behind us, but this squad that’s here now, only half that squad was here last year.

“It’s easy for me to sit and say it’s problems inherited. it’s definitely not – half this squad wasn’t here last year.

“It’s not a case where you can pencil it off to. A similar problem was here before I got here, but the problem has reinvented itself so you have to ask serious questions as to why it keeps coming back round?

“It seems to be a mentality of mediocre, ‘anything will do’. Not winning is acceptable, not challenging is acceptable, ‘it’s okay’ we’re in transition’, excuse laying whatever it maybe, but the bottom line for me is – they don’t work hard enough.”

Linfield manager David Healy will also be looking for a response from his players following Tuesday night’s 2-0 home defeat to Glenavon.

The Blues had claimed back-to-back away wins after following up their 2-1 win over Cliftonville at Solitude last month with a 3-0 win at Ards last weekend.

However, Tuesday’s defeat to the Lurgan Blues has left Healy’s men six points adrift of Glenavon in the race for third with the Linfield manager admitting he was shocked by his side’s lacklustre showing.

“It was a poor, poor performance and a poor result and one that surprised me actually,” said Healy.

“We were coming off the back of a couple of good performances away from home. I am shocked, surprised and hugely disappointed.

“At times, you were hoping with the amount of possession we had and the balls we were putting into the box that we could get an equaliser (at 1-0 down).

“We weren’t in front of the defenders tonight, we didn’t get those second balls when it was cleared. Overall, our performance was short of the standards expected.”