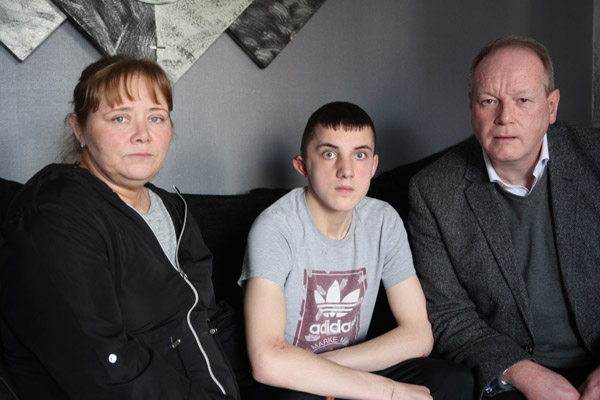 Robert Holmes was attacked by a sectarian gang on Saturday

A 14-year-old who suffered severe head injuries in a sectarian attack in North Belfast has been discharged from hospital.
Robert Holmes was attacked with sticks near the interface at North Queen Street on Saturday night.
PSNI Detective Sergeant Keith Wilson said it was reported that “three males with sticks attacked the boy while a crowd of people watched.”
The victim was able to limp away from the scene after sustaining a number of injuries. He was then taken to hospital for treatment.
After meeting with Robert following his discharge from hospital, North Belfast DUP MLA William Humphrey said: “Young Robert Holmes was subjected to a depraved and utterly vicious sectarian assault on Saturday evening.
“He described making his way home from Yorkgate Retail Centre on Saturday evening, along with two young friends, when objects were thrown at them by a large group of up to 30 older nationalist youths. His two friends managed to run off but Robert was caught, hit over the head with a bottle and beaten on the ground with wooden poles, bats and other weapons. Only when an adult came out of an off-licence in North Queen Street and shouted did the attackers take off.
“Robert required hospital treatment for severe injuries including a fractured skull, bruising and bleeding on the brain and required stitches to head wounds. This brutal attack could have resulted in fatal injuries and it will have made a deep impact on him. It is a relief that he has been able to come home after two nights in hospital.
“The PSNI have confirmed that they are treating this attack as a sectarian hate crime and there is no doubt that that is what it was.
"I call on all elected representatives to be unequivocal in condemning this sectarian attack and to join me in calling for clear co-operation with the Police investigation to bring those responsible to justice for their depraved actions.
"There is deep anger that such a serious attack on an individual by a cowardly crowd could occur.
It appears that the same group of nationalist youths later attacked PSNI vehicles in the New Lodge area of North Queen Street.
“As we now have brighter evenings we cannot allow this sectarian gang to set the agenda for interfaces across North Belfast. I appeal for calm and we will continue to push to see those responsible brought to justice.
“The PSNI tell us they are increasing patrolling in this area and elsewhere in Belfast. I urge parents and all people of influence to do what they can to prevent such trouble from occurring.
“Anyone who can help to bring those responsible to justice should contact the PSNI on 101 or can leave information anonymously on the Crimestoppers line 0800 555 111.”