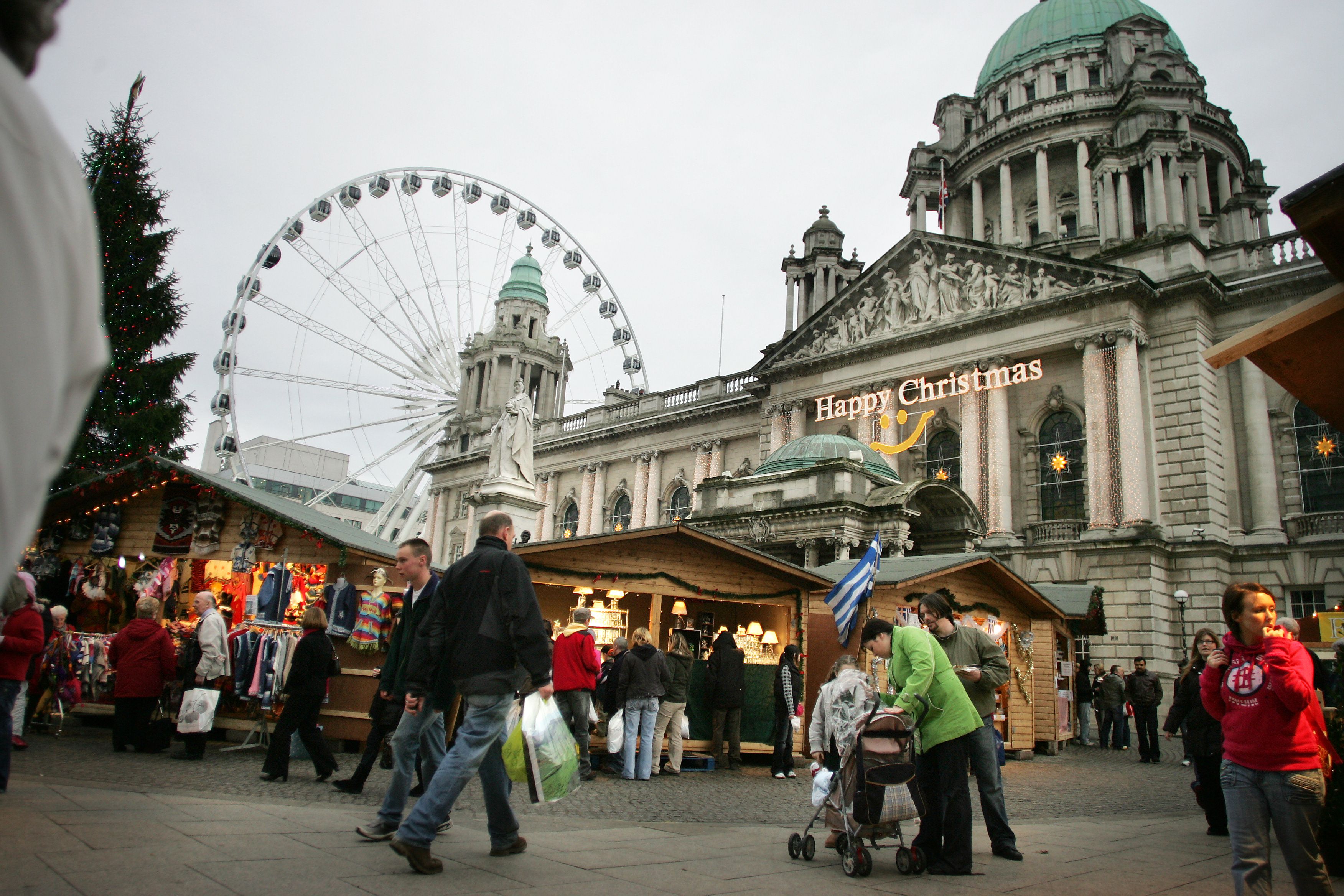 MARKET FORCES: It’s hard to escape from the increasingly commercial side of Christmas

THIS Christmas will unlike any other Christmas for most of us. The pandemic is to blame for that. Christmas can be a lonely place for some people. This year will be especially lonely for families who lost  loved ones to the Coronavirus. Our thoughts are with them all. I hope everyone who can enjoys the festive season as best as you can.

There are lots of things to dislike about the modern Christmas. The blatant commercialism of it. That may be a recent trait. Or maybe it was always thus. But nowadays the omnipresent pervasive media, social and otherwise, makes it difficult to escape the relentless advertising of the latest fad that we are persuaded that our children, spouse or friends cannot do without. I hate – if that’s not too strong a word – the distress caused for so many who cannot afford it getting caught up in this madness and getting into debt as a result. My heart goes out to stressed-out parents trying to make ends meet. I also greatly resent ‘Xmas’ replacing ‘Christmas’.

You dear reader may respond to these remarks by declaring ‘That’s not Christmas.’ You may characterise my comments as Scrooge-like. You may even mutter: ‘He has turned into The Grinch.’ All this may or may not be true. But it misses the point. The point is Christmas is supposed to be about the birth of a little baby. Some believe this baby was the son of God, sent to save humanity. If he was it is edifying that he was born in a stable, in poverty, the boy child of a refugee couple, Joseph and Mary, fleeing from occupation forces.

If God was trying to teach us a lesson there is a lifetime of lessons in that. Jesus wasn’t born in a palace. Or a grand big mansion. He was not born in a castle surrounded by riches and wealth. The baby Jesus was surrounded by farm animals. The stable was a cave. His bed was a manger. He grew up to become a working man, like Joseph the carpenter. His daddy. He grew up to teach love and fairness. His teachings are generally non-judgemental. Except when he addressed the great and the good. The wealthy powerful ones. In the end he was executed, done to death by crucifixion, by the great and the good. The wealthy powerful ones.

I greatly appreciate those who work over Christmas. In hospitals and hospices. Nursing homes and orphanages. On the streets with the homeless and helpless. The Emergency Services. The ones who mind us.

So it is good that we, believers or sceptics, should celebrate Christmas. And all humanity’s other great feast days. And that we should celebrate our own joyousness and good heartedness. Whether Christian or Jew, Muslim, Buddhist or Pagan. Believer or Non-Believer. We should celebrate and give thanks for the great benevolent givingness of decent hopeful people.

I have lost most of my faith in the institutional Christian church. I know great churchmen and women who I respect. I still like Mass, the sociability and assurances of it. But any institution which refuses to accord women full rights or which is more concerned about controlling instead of empowering, or with rules and obscure doctrinal matters, has lost its way. Institutions tend to do that unless they are democratic and empowering. They forget their founding purpose. Or origins. In this case a baby born in a stable who grew up to mix with all the ‘wrong’ people.

I like the   crib. The baby Jesus. I remember there was a stuffed camel in the crib in Clonard. It was a childish treat to visit it. Or the Moving Crib in Parnell Square in Dublin. The simplicity of it. That’s the Christmas I like. I like Dadaí na Nollaig. Daddy Christmas. I like giving and receiving presents. There is nothing I need but I like not to be forgotten. I try not to open my presents until Christmas Day.

I love that children are at the centre of it all. I like nice surprises. I love mince pies and good Christmas pudding. I love my Christmas dinner, especially when others cook and serve it and you get a wee drink as well.

And pre-pandemic and post-pandemic when extended family and friends break bread together. When we give silent thanks for the roof over our heads and the warm fire and family and friendship, the good food and company. And think fondly of absent friends. And others not as well off as we are. Lonely, impoverished isolated pilgrims. In this time of pandemic Christmas will be a strange occasion for many people.

I dislike Boxing Day. I’m a Saint Stephen’s Day man. A day for the outdoors, for walks and Christmas Day leftovers and lazing about. An old crocks match. And a decent film. Or a good book. Another wee drink or two. Peace and quiet. Celebrating life and the goodness of it.

So Christmas is about us minding each other. Trying to be kind. Making the effort. Like the Innkeeper who relented and gave Joseph and the very pregnant Mary shelter from the cold.

Happy Christmas to you all.  That’s  the preaching over for this year. Mind yourselves. Be kind. And tolerant. And thankful. Nollaig shona daoibh.

A Christmas message for Bethlehem

IN DECEMBER 2009 I visited Bethlehem as part of a week-long visit to Israel and Palestine for a documentary on Jesus. It was one episode of a Channel 4 series, The Bible: A History. My role in the episode was to discover the real Jesus – Jesus the man; the historical Jesus.

We know only about one year of his life. Was it possible to look at what came before this? What type of person was he? Did he have siblings? Sisters? Brothers? Girlfriends? Children? I was very taken by this challenge. I was intrigued by the opportunity to visit what many call ‘The Holy Land’ to reflect on the life of this singular figure.

As a strong supporter of the people of Palestine I also wanted to set this unusual opportunity in the context of today’s Israel and Palestine. I had visited the Palestinian territories before. Eight months earlier in April 2009 a delegation of us were there. At that time we met a huge number of NGOs, Israeli and Palestinian human rights organisations, women's groups, refugees, community organisations, all of the main Palestinian political parties and a Kadima member of the Israeli Parliament. We visited Ramallah and Bethlehem and spent two days in the Gaza Strip.

In December 2009 my visit was non-political. It was the run-in to Christmas Day. Bethlehem was aglow with Christmas lights and colourful Christmas trees were evident everywhere. There were crowds of tourists visiting the Church of the Nativity (above). It is a World Heritage site and holds the grotto which is believed to be the birthplace of Jesus.

But Bethlehem is also an occupied city. The tragic irony of this was sharpened for me by my new and growing knowledge of the ancient history of the place gleaned from the conversations I was having about Jesus and the Palestine of 2,000 years ago. At that time Bethlehem was an occupied town under Roman rule. Roman soldiers patrolled its streets and Roman policies dictated the economic and much of the social life of the region. Most importantly the Jewish people were denied their freedom – a denial which led to several failed and bloody rebellions.

In 2009 and still today the people of Bethlehem live under Israeli military occupation. The Israeli separation wall – a monstrous construction which stretches for hundreds of kilometres  and separates Palestinian families, separates farmers from their farming land and their water – overshadows Bethlehem. It surrounds the town. The Wall, the military fences and gates through which Palestinian workers must go each day to and from work and the armed Israeli soldiers are a constant reminder of military occupation. So too are the frequent reports of Israeli brutality, house demolition and killings.

Christmas is a time is for everyone and especially children, but if you are a Palestinian child living under Israeli military occupation then you face constant threat and danger. A report last week from ‘Defense for Children International – Palestine’ (DCIP) reveals the detail of arrests, the conditions of detention, and interrogation practices against children by Israeli authorities. The report concludes that the Israeli practices amount to torture or cruel, inhuman, or degrading treatment under international law norms.

The report documents 108 cases in which Palestinian children arrested by the Israeli military were held in isolation for two or more days. The average duration of isolation was 14.3 days and 43 of the children endured a prolonged period of isolation of 16 or more days. The report states: “The interrogation techniques used by Israeli forces are mentally and physically coercive... They combine intimidation, threats, verbal abuse and physical violence with the clear intention of obtaining a confession.”

I have now visited Israel and Palestine four times. I always leave feeling deeply saddened at the plight of the Palestinian people and the failure of the international community to do what it should to encourage a peace settlement.

2020 has been especially difficult for the Palestinian people.  The Coronavirus has made life much more difficult. Bethlehem is devoid of tourists. The hotels and the tourist shops are closed. 2021 is just days away.

I wish the people of Palestine and of Israel a peaceful Christmas and I want to extend solidarity to the Palestinian people and to assure than that the people of Ireland continue to support their just demands for national sovereignty and independence.