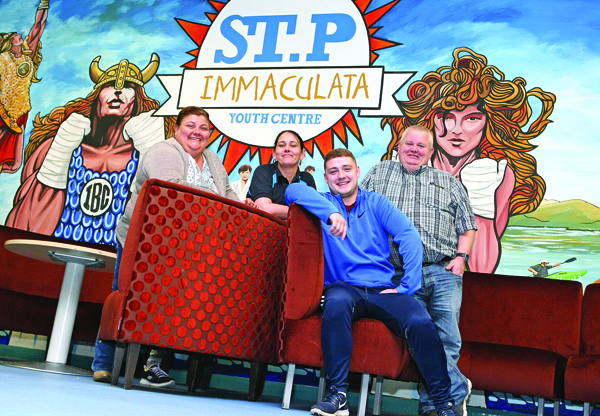 ST PETER’S Immaculata Youth Centre is all about positivity and possibilities for their young people.
Based in Divis, youth worker Stephen Hughes says he is fed-up with the young people of the area being demonized.
“Divis is always in the spotlight for the wrong reasons and it’s really not like that,” he said. “This is a wonderful area, full of wonderful people and the kids here are terrific.
“It’s not fair, there’s so much positive things going on in Divis and so many wonderful things that the kids are achieving. Those kids never seems to get any kudos for their achievement.
“One of the things we want to change is this ‘DHLA’ slogan that you see everywhere. Everyone knows it stands for Divis Hoods Liberation Army, well we want it to mean Divis Has Lots of Achievements – that’s the perception we need to change.”
Stephen added: “Divis is a rich community full of history, heritage and culture. It’s a beautiful place and it’s time to tell those stories and get those messages out there.”
Ranging from seven-25-year-olds the St Peter’s centre never stops.
“We are open seven days a week,” says Stephen. “We have so many groups for our different age ranges, we have stuff going on for our juniors (7-11), intermediates (11-14) and seniors (14+). Each age band has age appropriate programmes. Everything that we do has a learning objective. The wee ones have monthly themes around manners, healthy eating, numeracy and literacy.
“Intermediates have a junior ambassador programme – this is a cross community programme involving 40 young people from Divis, Shankill, Tigers Bay and Newington, which has proved very successful. They have completed a documentary which will be launched during community relations week which is coming up soon.
“The theme over the summer was health and how living on the interface impacts your health, be it mental, physical or emotional health.”
Stephen continued: “From now to December we are looking at global prejudice, not just sectarianism in the north, but Islamaphobia and the Palestine situation, racism and immigration.”
St Peter’s also like to prepare their young people for life beyond the youth centre and particularly for the world of work.
“We have helped 11 kids into employment this year which is wonderful. We helped them with their CVs and prepared them with interview skills. We told them what employers want and what words and phrases to use.
“We are also sending 12 of our young ones out for a week’s work experience with prominent employers such as City Bank, Bombardier and the Fire Service to name a few.
“We want them to know how to represent themselves and impress employers.”
Discussing the importance of youth work Stephen said: “This is such a rewarding job. Nobody gives these kids a chance and when you’re never given a chance it’s very easy to feel beaten down. When you give them the opportunity they thrive, they can achieve anything. We walk beside them and help them grow, we have five kids away to university this year which is a big deal in a community where only three per cent go on to third level education.
“These are the same kids who run this club. Give them a wee bit of responsibility and they thrive. I am in awe of them. The only way this youth club works is by the community owning it. It’s really blossoming now and we are beginning to see the end results.”