WE SAY: Short-termism a Covid disaster 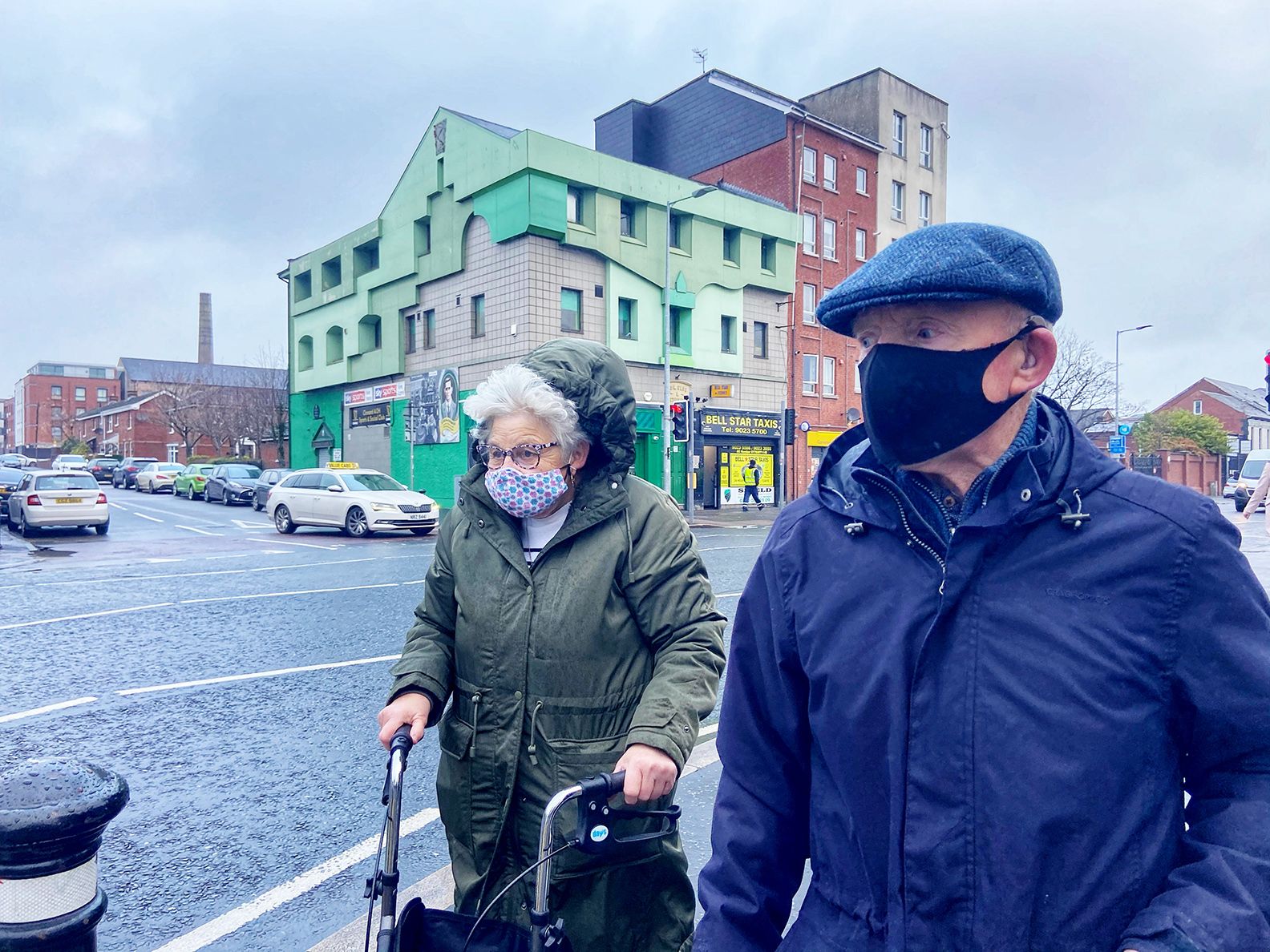 HEALTH THE PRIORITY: A masked couple on the Falls Road at Clonard which is now the second-worst Covid-hit postcode in the North.

THE deeply unsatisfactory compromise arrived at last Friday on Covid restrictions must qualify as one of the shortest distances a can has ever been kicked down any road. Even before the rancour has subsided, even as the blame is still being angrily apportioned, we are back at the point where another agreement must be reached, another deadline met.

If anyone thought or hoped  that the DUP would be chastened by an outraged public response to their decision to deploy a veto twice to block an agreement on restrictions by the other four parties, they were to be disappointed. Party leader Arlene Foster on Tuesday said she hoped that a decision on restrictions could be arrived at by Friday in a “collaborative, collegiate way” but refused to rule out the use of the veto mechanism for a third time.

Last week four out of the five parties agreed to a restrictions template put forward by Chief Medical Officer Dr Michael McBride and Health Minister Robin Swann; the DUP alone objected. It appears that unfortunately Mrs Foster is under the impression that a  “collaborative and collegiate” process is the same as a unanimous one, which it is not.

This behaviour as the Covid figures continue to rise and with the majority of the north’s seven hospitals running at over 100% occupancy is shameful politicking.

A multi-party government would cease to function if the only legislation that it ever produced was the result of complete unanimity. The simple fact is that in most cases a majority – particularly if it is a heavy majority, and one backed by expert medical advice – needs to prevail for the good of the public. That is the essence of collaboration and collegiality and not the selfish DUP definition.

Cynically, the DUP has decided as the latest deadline looms that Health Minister Robin Swann is the one to single out from the pro-restrictions Executive herd. They are doing this because Mr Swann has a much less effective  party support mechanism than Sinn Féin, the SDLP and Alliance, but primarily they are doing it because he is a a unionist and the DUP has long profited from scapegoating ‘Lundys’.

This behaviour as the Covid figures continue to rise and with the majority of the north’s seven hospitals running at over 100% occupancy is shameful politicking.

The DUP’s claim to be acting on behalf of the poorest in society can be immediately ignored, as their past record in supporting and defending disadvantaged communities speaks loudly and clearly for itself. Its claim to be acting on behalf of struggling businesses, meanwhile, is perhaps more in keeping with what the party is actually about; that said, businesses don’t need jack-in-the-box openings, they need certainty. And one thing we know for sure at a time of huge uncertainty is that a mere week of lockdown followed by more acrimonious attempts by the Executive to find a way forward are in this context as far away from certainty as it’s possible to get.

Far from the Executive being dysfunctional it has shown a surprising amount of accord in getting to a point where 80% of its members agree on the way forward.

One party’s dysfunctionality is doing the damage.