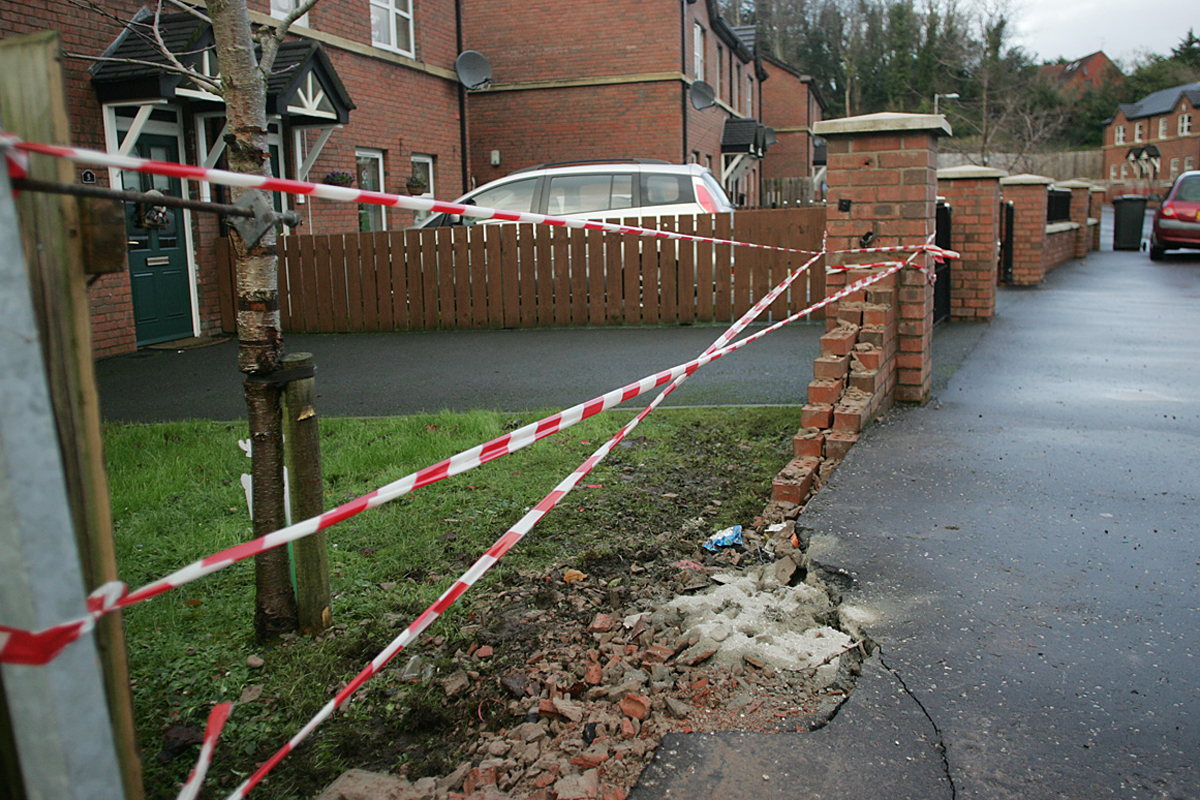 A South Belfast mother has said she and her two children are lucky to be alive after a lorry crashed through her garden wall and almost ended up ploughing into her house.

The front wall of Nicola McGrattan’s Newtownbreda home was destroyed in the incident, which occurred around 7.15am on Friday (December 16). A lorry slid in the icy conditions before colliding with a lamppost and careering into the wall.

Nicola said if the crash had happened any later in the day, her three-year-old daughter and eight-year-old son might have been in the garden.

“My son was going to school at the time and I was upstairs in my bedroom watching it happen, so as bad as it was, we are very lucky. Things would have been a lot worse if it was in the afternoon.

“Although it’s cold weather my kids have been playing outside in the garden a lot lately, so if it was later in the day there was a good chance they would have been there.

“If the lorry hadn’t hit the lamppost there’s every chance it would have ended up in my living room and none of us would have had a chance.”

Nicola said although she has lived in Orchard Mews for four years, two grit boxes installed there two years ago have never been filled, leading to the icy conditions in the street.

“It’s always been a problem here – two years ago the woman two doors down had a taxi slide into her wall. That was when the grit boxes were installed but they haven’t been filled up since. Last year my next door neighbour had something similar but not as serious as what happened to my wall.

“Gritters don’t come around here either even though you have to come down a hill to get into the street. There should be a gritter coming around this street as standard especially if the weather is going to continue to be so bad.”

The street is the responsibility of Helm Housing Association, who Nicola claimed only cleared part of the damage caused by the lorry.

“They sent a small van around to try and clear it on Friday but it couldn’t take all the rubble and they haven’t been back since. Monday was the first day I’ve come back to the house – I went to stay with my mum because I was so frightened of something happening again.

“I’ve been told the wall should be rebuilt by the end of this week but because of Christmas it may be a bit later and if so it’ll be after Christmas before it’s up again.

“It’s scary now because I’m left without any protection and every time I hear a car go by now I panic in case the same thing happens again.”

Alan Rea, Helm’s director of housing, said they had refilled the salt bins in Orchard Mews this week.

“The salt bin we filled last Friday (December 16) was half empty the following Monday, which leads us to believe that people from outside Orchard Mews may be taking the salt.

“We are under no legal obligation to fill the bins but are doing so as a gesture of goodwill.

“We have also removed the debris from the damaged wall and will rebuild it, provided our contractor can source a matching brick this week.”