SPORT: McCrory admits boxers face a tough period due to lack of action 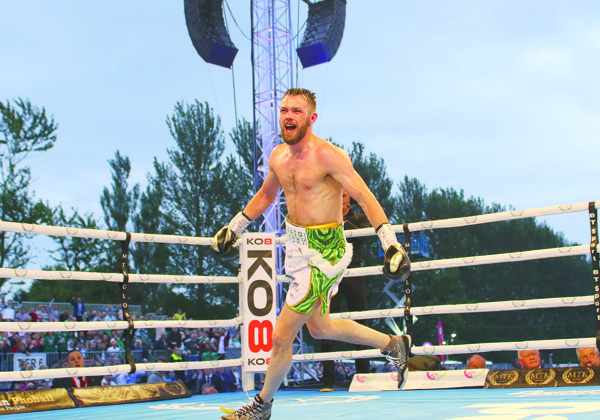 PADRAIG McCrory admits the current situation with the Covid-19 pandemic has made it a worrying time for professional boxers who find themselves without any certainty as to when they can earn their next pay cheque.

The BUI Celtic super-middleweight champion is one of many local fighters who were due to see action during an MTK Global doubleheader at the end of the month in Belfast, but like all other sporting activity, boxing finds itself in a holding position until the current health crisis shows signs of abating.

The popular Belfast man had hoped this to be a huge year having earned his first pro title at the Falls Park last August with a stoppage win against Steve Collins Jnr, but his plans have been thrown into disarray with no opportunity to earn compounding matters.

On Sunday, Michael Conlan tweeted his fears for many local fighters who will be feeling the financial pinch and McCrory - who also works as a personal trainer - agrees that the situation is precarious for many boxers at present.

“With boxing, there’s no fallback and no wage coming in,” he said.

“Most professional sportspeople get paid on a weekly or monthly basis, but that’s not the case with boxing so it’s very uncertain at the minute.

“Thankfully, I have been smart enough and my wife works full time, so things aren’t too bad. But there are loads of people who are struggling badly because they’re self-employed. As I’ve only been self-employed two years now, this (government furlough) scheme doesn’t include me.

“There are fighters there who are 2-0 or 3-0 and even me at my age (31), we don’t know when there will be another show. If there is, will it be behind closed doors and will the guys who are on the ‘ticket deal’ get a slot on them?”

The ‘ticket deal’ is the reality for the vast majority of up-and-coming boxers whose fight purse depends on the number of tickets sold.

McCrory always enjoys a huge support and that selling power has earned him regular slots on shows and therefore helped build his professional record. ‘The Hammer’ had been due to appear on MTK’s Europa card on Friday, April 24 with the management company scheduling a second fight night at the Ulster Hall the following evening, meaning a large number of local fighters were due to see action, but that’s no longer the case.

There have been whispers of some action taking place behind closed doors, but whether the British Boxing Board of Control would agree and if it is feasible for a broadcaster to pay for such an event remains to be seen.

“I suppose a lot depends on whether TV wants to pay the money to put them on,” added the St James’ man.

“The thing is with a show maybe being behind closed doors, there is nobody there to watch them so everyone will have to watch it on TV so their numbers could be bigger.”

It’s certainly a frustrating time for McCrory who has recently teamed up with a new training duo of Dee Walsh and Dan Anderson.

Even if boxing does get the green light to return over the summer and in time for the scheduled Féile an Phobail fight night on August 1, it would give him little time to work with his new team.

It’s a similar situation for all boxers who would be deprived of sparring opportunities as most will now be hoping to tick over by doing whatever training is possible from home.

“There are events already being cancelled right up until the end of July and they’re hoping to have ten or fifteen thousand the week after. I suppose we just have to stay optimistic and try to keep semi-fit in the meantime.

“I’ve noticed Eddie Hearn has booked in a few shows for July just in case they can go ahead, so that gives you a bit of hope, but at the minute there’s no sparring or training with your coaches as you have to keep your social distance. It’s just about trying to stay ready if that chance comes, and if it does, I have to take it.

“I’m something like 17 in Britain, so I’m not too far away from getting a title shot and once the call comes, I’m here.”

Like many, McCrory has been playing his part in the fight against the virus by staying at home as much as possible and admitted it was tough to adjust for the first couple of weeks.

However, he feels he has started to snap out of that and is doing what he can to stay in shape, and has offered advice as to what everyone can do to try and stay active during these unprecedented times.

“I’m into my fourth week of self-isolating where I’m only going out for essentials,” he explained.

“For the first 10 days I felt myself in a bit of a rut with no motivation, but a few days back I started to set myself a target. It’s always good to set small goals instead of just winging it. If you can try to achieve a small target every day, then it makes it a lot easier.

“My goal now is to try to do 5k per day for the next 20. This is day two, so it’s just about staying motivated and keeping your fitness levels up.”