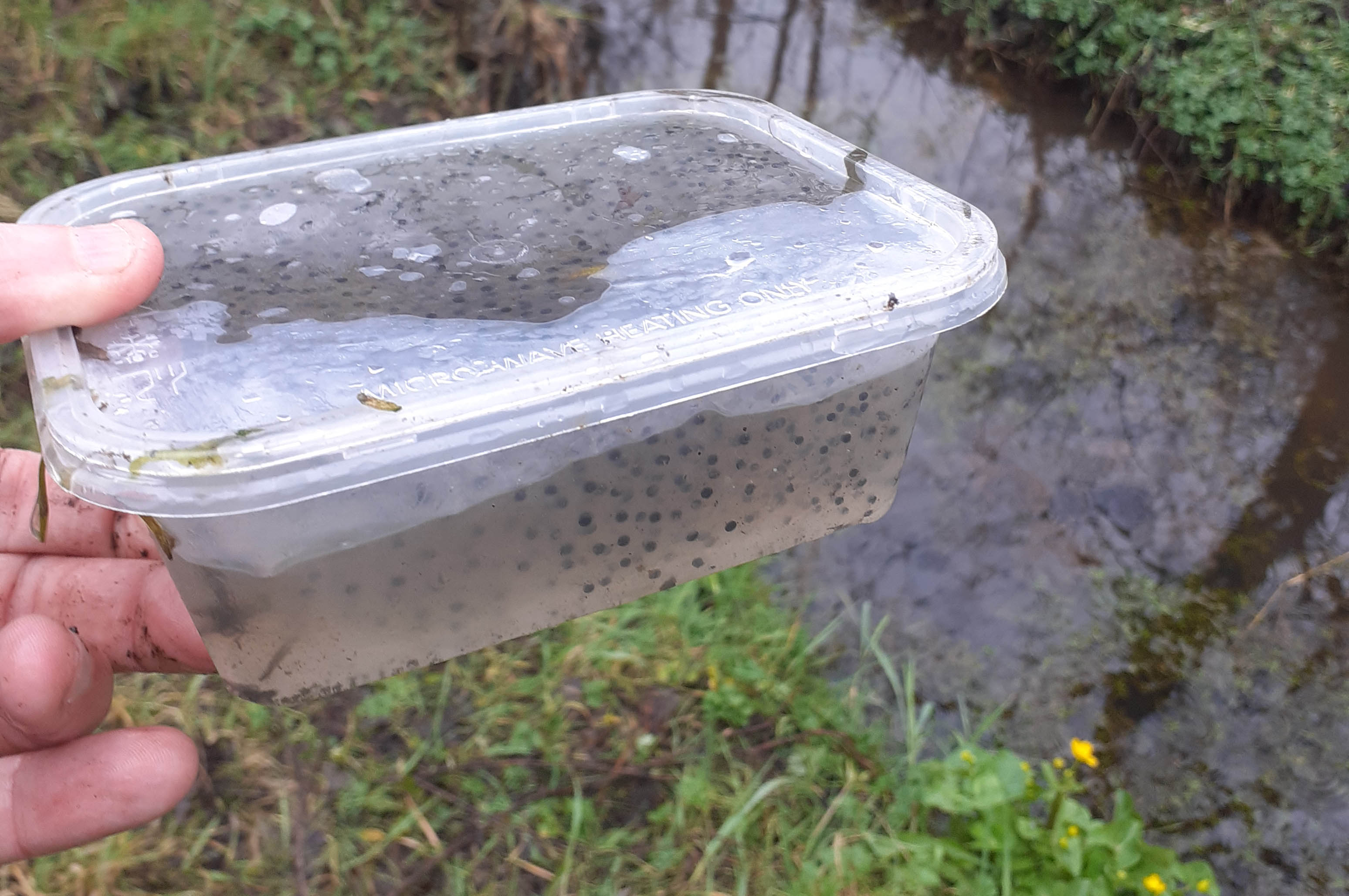 PLENTIFUL: While frogspawn is everywhere, frog numbers have been failling

THIS wee carton of magic is filled with hundreds of mini-miracles. Dúlra collected the frogspawn at a stream near Lough Neagh this week and put them in his garden ‘pond’ – a bucket of water sunk into the ground.

The stream in the picture is packed with spawn, floating like translucent clouds. There’s no harm in taking them, firstly because they are so bountiful – a single female frog lays 2,000 eggs – and secondly because Dúlra’s going to give them a much safer home.

If every tadpole survived we’d have a problem of biblical proportions, so maybe it’s just as well that 49 out of every 50 are eaten. Frogspawn are like plankton in that they provide a stable diet for almost every other animal.

Female frogs don’t seem to take much care when laying their eggs – clumps of them were lying on the grass verge. Dúlra spent 10 minutes putting as many as he could find into the water – that’s thousands of wee creatures given a chance of survival. You could spend a whole day at this bank and still not save all the spawn.

Last year Dúlra successfully reared about 200 mini-frogs – although rearing might be an exaggeration as you don’t need to do anything except put them into water! This year he was waiting for those young frogs to return to the place of their birth to breed, but he only just learned that frogs don’t breed in their first year of life.

And so he’s topped up the ‘pond’ again this year and will now sit back and watch one of nature’s miracles happening before his eyes.

Every school should have a wee frogspawn pool – if it’s amazing for Dúlra you can only guess how exciting it would be for kids to watch the spawn turn into tadpoles and then the wee frogs to magically form in a matter of weeks.

Frogs are still plentiful – but not as much as they used to be. When a young Dúlra used to dander up to Dundrod to watch the bike races, the sodden fields were literally jumping with frogs under your feet. Today, most of those once-rush-filled fields have been drained and cattle feed on the bright green grass.

A bucket of water sunk into a city garden or a school yard and filled with frogspawn will, in its small way, help rebalance things in favour of the frogs.

THIS is the glorious siskin that came to a tragic end in Dúlra’s garden this week.
He found the wee créatúr dead on the path – it had obviously crashed into the window – and indeed there was a big smudge on the pane. In fact, you could make out the outline of a sparrowhawk, which must have been chasing the sisken when they both hit the window. Luckily, the sparrowhawk survived.

Dúlra has really enjoyed watching the flock of siskins he’s attracted to the garden this year to feed on nyger seeds and sunflower hearts. And it’s a tragedy that one has been killed because of the ‘invisible walls’ that we have on our homes.

Siskins & a goldfinch on the feeder in my garden, have 4 pair of Siskin visiting daily😊 pic.twitter.com/VWPs2oKSU9

The male would have already paired off for breeding, which makes it even more heartbreaking. Dúlra cut out a few dark paper shapes and taped them to the window in the hope it won’t happen again.

The deaths of two other birds in Belfast this week are even more worrying – a pair of peregrine falcons nesting on the famous shipyard cranes were poisoned. This is the world’s fastest bird and Ireland has already lost its eagles, which we shot and poisoned. These rare falcons should be the pride of the city. That they are facing similar persecution in 2021 as our eagles did centuries ago is simply unacceptable.

FORMER teacher, politician and cultural activist Pat Rice was shocked to spot a famous seaside bird last week – in the middle of Colin Glen! Pat – who has just celebrated the brilliant milestone of 80 – walks there every day and saw the giant black bird – which he now knows is a cormorant – cailleach dhubh or black hag in Irish – feeding at a lake. Cormorants have in the past been occasionally spotted inland during coastal storms.

It would take some storm to stop Pat's peregrinations – he spent decades walking to work and back from his Glengoland home to St Mary’s school on the slopes of Black Mountain – which has stood him in good stead. Breithlá sona duit, a Phádraig!